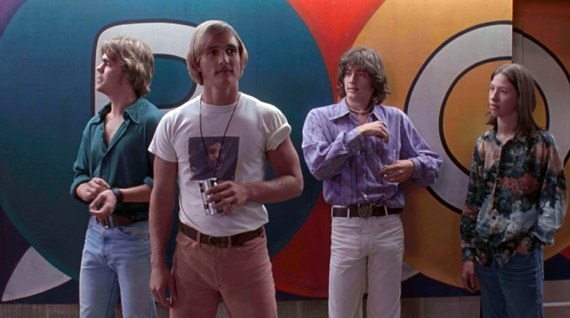 On Thursday night, Dazed and Confused celebrated its 20th birthday with a special screening at New York Film Festival, which was attended by director Richard Linklater and a handful of cast members. I have to admit, the fact that Dazed and Confused is somehow already 20 years old didn't really surprise me -- this is mostly due to the fact that I remember where I was when the Dazed and Confused soundtrack used to play on a never-ending loop on my CD player in 1993.

(Note: In 1993 people used to own in-home CD players. In college I owned an in-home CD player that held 100 CDs at the same time. I thought that would be the epitome of music convenience. I now own a machine that's primary function is to store and play 10,000 songs -- and that machine is now so obsolete that its been sitting in a bedroom drawer unused for the last five years.)

In a chapter about time travel in Chuck Klosterman's 2009 book, Eating the Dinosaur, he adds an observational footnote about the 1985 movie Back to the Future. Klosterman writes:

"Chuck Berry recorded 'Johnny B. Goode' in 1958. Back to the Future was made in 1985, so the gap is twenty-seven years. [...] That's almost the same amount of time [between 1985 and now]. Yet nobody would refer to Back to the Future as an "oldie," even if he or she were born on the 1990s. [...] As culture accelerates, the distance between historical events feels smaller."

I distinctively remember reading that footnote in 2009 and realizing for the first time that I was old. I realized that a lot of the culture that is still very much in the zeitgeist today happened during what at least used to be thought about as "a long time ago." I started playing this game with other pieces of culture. Like the fact that referencing Star Wars in 2013 would be the same thing as someone in 1977 insanely referencing the top grossing film of 1941, Sergeant York. Or that in 2013, Seinfeld has now been off the air for as much time as The Brady Bunch had been off the air when Seinfeld debuted in 1989.

And, yes, now: If Dazed and Confused were released today it would be about high school seniors living in 1996. These kids would have some access to the internet. They'd be watching Seinfeld.

This is shocking to me because when I first saw Dazed and Confused around the time of its initial release, the characters in the movie felt like they might as well had been living 100 years ago -- and I was around the same age as they were portrayed. There were obviously certain similarities between these kids from 1976 and the life I was living -- we both had the ability to have nothing to do on a weekend night -- but it seemed like a different world. But, now, 1993 doesn't seem that long ago. Which is odd because an 18-year-old in 1993 would have a much more similar high school experience to someone who lived in 1976 than to someone living in 2013.

Put it this way: If Dazed and Confused were made today, would anyone care? Is there anyone feeling nostalgic for 1996? If Dazed and Confused were released today, instead of the movie opening with Aerosmith's "Sweet Emotion" it would open with "C'mon N' Ride It (The Train)" by Quad City DJs. Instead of that poster of Pink Floyd's Dark Side of the Moon in Pickford's bedroom, it would now be a poster of Collective Soul's Collective Soul. Instead of Hitchcock's Family Plot playing at the drive-in, it would be Spy Hard (not at a drive-in). At some point someone in the movie would have to do the "Macarena."

No one would want to see this movie.

And, so far, the 90s nostalgia movies that have been made haven't fared too well. For example, the Aubrey Plaza vehicle The To-Do List made just under $4 million domestically. (Granted, The Perks of Being a Wallflower fared better, but it would be hard to define Perks as a nostalgia movie.)

In 1993, the Dazed and Confused soundtrack was more popular than the film itself. Everyone owned this soundtrack because it was one-stop shopping for songs from Alice Cooper, Foghat, Lynyrd Skynyrd, KISS and Black Sabbath. Basically, it was a way to drive around and listen to music that wasn't C+C Music Factory. Today, a soundtrack would be music from the likes of Third Eye Blind, Better Than Ezra and Gin Blossoms. (Please keep in mind that I'm pretending we live in a world that would produce a soundtrack for a new Dazed and Confused movie. In reality, there wouldn't be a soundtrack.)

I'm not sure what the point of this is other than "time moves forward," which we all knew already. I do suppose that it will be harder and harder for a specific time period to claim its own stake. Dazed and Confused works because 1976 is just so specific. Right now, there's really not a huge difference between 2013 and 2008. Klosterman's right: as culture "accelerates," the distance between cultural events does became smaller. And, as an effect of that, movies like Dazed and Confused will be more and more difficult to make.