When artist Jun Kaneko's digital sets and inventive costumes for The Magic Flute debuted at San Francisco Opera two summers ago, the critics did handsprings. I'm sure operagoers enjoyed the same intriguing visuals in Washington National Opera's new production, which opened Saturday night at the Kennedy Center. But beyond the nonstop stream of colorful images, what I admired was an impressive group of artists, many of whom were making their WNO debut in this beloved Mozart work. And for this opera fan anyway, the evening's best rewards were found in finely nuanced singing, though Kaneko's cleverness was impressive.

Mozart and his last collaborator, singer-impresario Emanuel Schikaneder, created The Magic Flute as a Singspiel, a comic opera with spoken dialogue, meant to be acted and sung in the language of the people (i.e. German for its September 1791 Vienna premiere). In keeping with Mozart's original intent, WNO has created an English-language version with a witty, often poignant book by Kelly O'Rourke, the company dramaturge.

The plot pits the nefarious Queen of the Night against her daughter Pamina and the young prince Tamino against his own desire for love. Along the way Tamino acquires a sidekick, Papageno, who catches birds and longs for a soulmate, and he meets a wise guardian of a temple, Sarastro, who offers enlightenment through trials and music--yes, the help of an enchanted flute. WNO's production, directed by Harry Silverstein, does a stellar job dramatizing the interplay between good and evil.

The Magic Flute requires sensitive conducting and WNO maestro, Philippe Auguin, offered a sumptuous overture and excellent support throughout, even stopping at one point when Maureen McKay as Pamina suffered a coughing jag. She quickly recovered and this tiny problem did not dim her luminous performance. McKay has a bright lyric soprano with gorgeous high notes and elegant pianissimo, and she's a good actress. Since Pamina is her WNO debut, I hope she'll return.

Another highlight for me was hearing Joshua Hopkins as Papageno, also making his company debut. Never mind that the bird catcher in a green-and-black unitard is a scene-stealing role with the funniest lines. Joshua Hopkins has a plush, virile baritone that puts me in mind of another great Canadian baritone, Gerald Finley, and I predict Hopkins will have a similarly illustrious career. His Papageno was totally endearing, and his voice filled the Kennedy Center Opera House with sweetness and warmth. When he and McKay sang their first act duet about the virtues of love, I heard the vocal eloquence of two genuine Mozarteans. 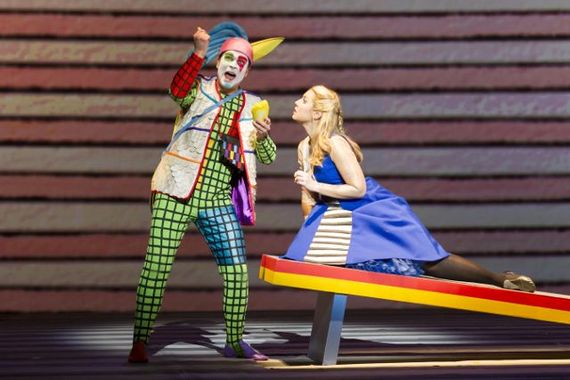 Joshua Hopkins as Papageno and Maureen McKay as Pamina.*

I also enjoyed Joseph Kaiser as the noble Tamino, Kathryn Lewek as the Queen of the Night--she nailed the famous high F in her big aria--Ashley Emerson as Papagena, and John Easterlin as Monostatos, all making their company debuts. Soloman Howard was an imposing Sarastro, and his rich basso added allure to the temple scenes. By the way the WNO chorus never sounded better--kudos to Steven Gathman, chorus master--and two stalwarts were fine in cameo roles: James Shaffran and Corey Evan Rotz as First Priest and Second Priest.

In an another touching and vocally majestic debut, David Pittsinger sang the Speaker, adding moral authority and weight to his claims that Sarastro was a force for good.

No Magic Flute would be successful without the machinations of the Three Ladies, sung and acted well by Jacqueline Echols, Sarah Mesko, and Deborah Nansteel, or the vocal charm of the Three Spirits, here portrayed by Will McKelvain, Jared Marshall, and Arya Bailan. This trio offered one of the night's best effects, arriving in three pretty cones suspended on wires and moving above the stage.

The opening performance was simulcast free to the public in Nationals Park as part of the company's "Opera in the Outfield" program. When each principal took a personal bow, he or she wore a red Nats cap or toted a baseball, a nod to those fans in the ballpark who were watching on the Nats HD scoreboard.

The Magic Flute runs through May 18 at the Kennedy Center Opera house. Two casts will alternate performances. For information contact, www.kennedy-center.org.