Last June, President Obama nominated three exceptionally qualified individuals to fill three vacant judgeships on the U.S. Court of Appeals for the D.C. Circuit: a jurist, a professor, and a litigator. At the time, I wondered, "will they get a vote?" It seems now, the answer is No. 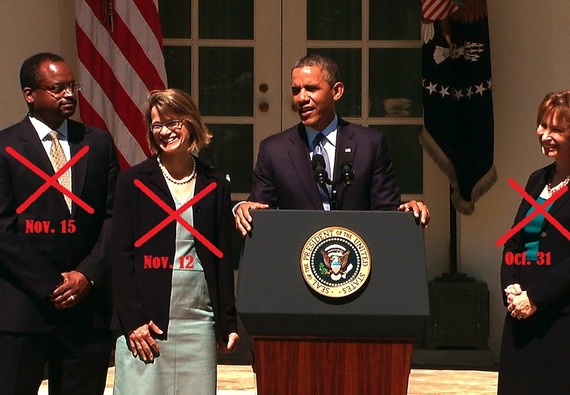 In the last three weeks, the Senate has filibustered all three nominees, despite their qualifications. Indeed, Senators blocking the cloture motion to end debate and proceed to an up-or-down vote for each nominee's confirmation admit that their objection is not that the individual nominees are unqualified to serve, but instead based on the misguided idea that the president is "court-packing" this important court by filling vacant seats. The number of seats on the D.C. Circuit is set by legislation based on the recommendations of the nonpartisan Judicial Conference of the United States -- Chaired by Supreme Court Chief Justice John Roberts. By nominating individuals to fill seats already vacant on that court, President Obama (like President Bush before him who had four nominees confirmed to fill vacant seats on the D.C. Circuit) is merely fulfilling his constitutional duty, not attempting to "pack" a court by adding new seats to create a majority to overrule sitting judges.

Our federal court vacancy crisis is not an illusion: 10 percent of federal judgeships across the country sit vacant. Each empty seat on the bench means slower justice for millions of American citizens and businesses who rely on our judicial system as the fair and impartial arbiter of disputes and provider of justice.

Moreover, it is important to us all that our judiciary is diverse and represents all those citizens who may enter the courtroom. A diverse bench simply improves the quality of justice and the public's trust of the institution. Yet, the list of diverse nominees subject to Senate filibusters and delay has just grown by three names. During these recent filibusters, a number of Senators spoke on the floor about the lack of women judges on the appellate courts and the unacceptable history of the Senate filibustering women nominees to the D.C. Circuit. The only two Republican Senators who crossed the aisle to vote against delay were Sen. Lisa Murkowski and Sen. Susan Collins.

Our federal courts should be governed by the rule of law, not partisan politics and obstruction in the Senate. The system is broken and it is time to fix it. Those waiting for justice should not have to wait while Senators play political games with judicial nominations. Senators should look to reforming the rules of the Senate so that it can fulfill its constitutional obligation to "advise and consent" to judicial nominations. Senators who object to the confirmation of a particular individual to the bench would have a chance to vote no -- but these nominees still deserve an up-or-down vote.