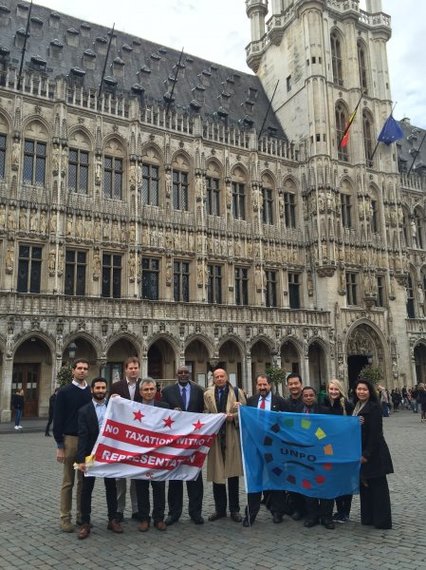 At its 20th session in Brussels, Belgium, UNPO formally voted to accept the Nation's Capital as a new member. The Unrepresented Nations and Peoples Organization (UNPO) is an international, nonviolent and democratic membership organization. Its members are indigenous peoples, minorities and unrecognized or occupied territories who have joined together to protect and promote their human and cultural rights, to preserve their environments and to find nonviolent solutions to conflicts which affect them.

The UNPO Presidency considered the application of the District of Columbia, alongside that of two other prospective members. Only the DC application met the formal requirements for membership. In recognition of its lack of self-determination, lack of voting representation in the national legislature, and potential unequal weight in Presidential elections, the District of Columbia was admitted as a member of UNPO through a vote by the Presidency Members. The UNPO found that the struggle for equal political representation in the Nation's Capital clearly qualifies DC as an unrepresented territory.

Many believe that the continuing denial of equal congressional voting rights to the citizens of Washington, DC is a serious human rights violation, and places the Government of the United States of America in contravention of numerous international human rights treaties and other international agreements, chief among which is the International Covenant on Civil and Political Rights (ICCPR).

This international human rights treaty was ratified by the Senate in 1992; its ratification by the Senate and subsequent signing by the President makes its provisions, except for those where reservations were attached, legally binding on the United States. The Senate made no reservations with regard to the right to representation. The treaty therefore obligates the US to guarantee all its citizens, including DC residents, equal political participation in their national legislature through duly elected representatives. The U.S. State Department has recognized this fact.

As recently as March 2014, the UN Human Rights Committee reiterated its "concern that residents of the District of Columbia are denied the right to vote for and election of voting representatives to the US Senate and House of Representatives." The Committee cited articles 2, 10, 25 and 26 of the ICCPR that pertain to a guarantee of voting rights in the national legislature to all citizens as well as to the right to equality before the law for all people. The Committee went on to make its recommendation to the United States that it "provide for the full voting rights of residents of Washington, DC."

Currently there is a Bill in the U.S. Congress calling to make DC the 51st state in the Union. H.R. 317, the New Columbia Admission Act, introduced earlier this year by DC's non-voting Delegate to the US Congress, Eleanor Holmes Norton, has 126 co-sponsors in the House of Representative. An equivalent Bill in the US Senate, S.1688, introduced by Delaware US Senator Thomas Carper has 18 co-sponsors. Not a single Republican member of Congress is listed as co-sponsors of either Bill.