Usually when I knock on doors, it's the weekend before Election Day, not after, and I am asking for votes, not liability waivers. Four days after the polls closed, I rapped on the doors of the Highland townhouse apartments in the Anacostia neighborhood of southeast Washington, D.C. I had just met Anne Marie DiNardo, a program leader for Sierra Club's inner city outings group (ICO) in Washington, D.C., and she was walking me through her process for getting the neighborhood kids ready for their monthly outing, this time a trip to Great Falls National Park.

The kids were excited. Once they saw us, they ran towards us to grab permission slips to take back to their parents and guardians. They knew the routine. I was just learning -- this trip was part of my process to become a certified outings leader for the Sierra Club.

DC ICO has been going on outings with the kids from the Highland Addition low-income housing project for ten years. When I asked a few of the leaders why they chose to volunteer with DC ICO, these were some of the responses:

"I became a leader after volunteering for a few months because I enjoy planning educational activities for children and finding creative ways for children to learn. What keeps me coming back is the connection we make with the youth. They look forward to the trips with us and having a positive environment to explore nature," says Sierra Club volunteer DC ICO Leader, Anne Marie DiNardo.

"I grew up in a single-parent household in an urban area where I helped my mom with my brother and my sister. After I joined the Army and I settled into my adult life routine, I wanted to give back to the community, especially to the kids who were growing up in areas like the one I grew up in. The kids are the reason I volunteer with ICO and the reason I keep coming back. Watching them hop from rock to rock, learn to swim or improve upon their swimming skills, and learn that the outdoors is fun, not scary, is lovely and fulfilling," says Sierra Club volunteer DC ICO Leader, Melaina Sharpe. 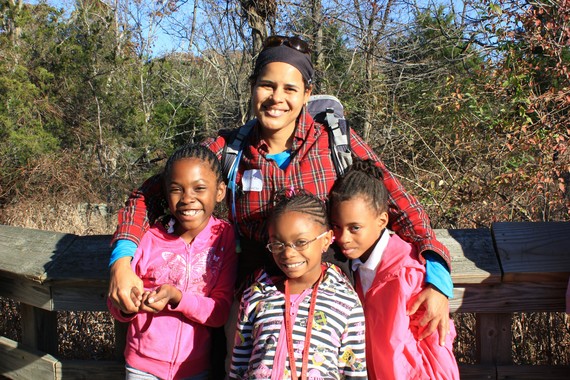 We arrived at the picnic area near the Billy Goat trailhead and the kids made sandwiches and ate lunch before we started on our hike. Some of the youth got a good work out running through the park to catch falling leaves before they made landfall. Then we hit the trail, which was packed. We spent the day scrambling over rocks (like Billy goats), watching Great Blue Herons wade in the water, and waiting to see a few white water kayakers prepare to brave the falls.

My outing with DC ICO gave me another reason to be proud to work for the Sierra Club. Not everyone has access to the great outdoors; only one in five kids have playgrounds or parks within walking distance of their home. Spending time in nature makes kids (and adults) healthier, happier and smarter. Leading ICO trips for 14,000 young people, with limited opportunities to explore nature, each year, is one way Sierra Club volunteers are bridging the divide between youth and the outdoors. We've also recently launched a Nearby Nature initiative to encourage communities to access, discover, protect and restore nature in and around urban areas, ensuring that access to the outdoors is increasingly equitable.

Learn more about Sierra Club's outdoor programs and the Nearby Nature initiative.