It's hard to know what to do, as mere citizens, to try and fix things so many years after the United States government decided it did not have to follow its own laws, the Geneva Conventions or the jus cogens torture prohibition. It's now 10 years after the indefinite detention prison of Guantanamo was created, an entire decade since the U.S. went off the rails. With the recent passage of the National Defense Authorization Act broadening and making permanent its "war on terror," the U.S. government seems to have given up on ever righting itself. 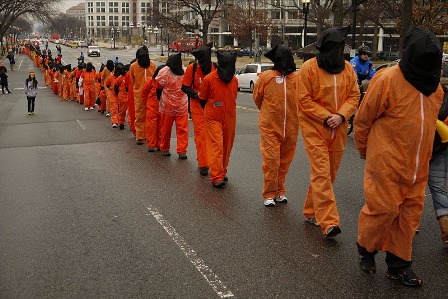 (Photos above, below and more by Andrew Courtney at Guantanamo Demo, D.C. 1.11.12

But clearly, the more we can educate the better! Clearly, the more we can reach outside our "anti-torture groups" to the larger uninformed, apathetic public, the better, either through demonstrations or through sharing such news and photographs with those friends, relatives, and citizenry who are not paying attention to the issues of war, war crimes and war blowback. Otherwise, the situation will continue to worsen. As some speakers said at the Washington, D.C. event on Jan. 11, 2012, the situation under the Obama Administration is far worse than it was under Bush. A new carefully researched book We Were Never Like This Before tells the story of how the wars have made victims of us all. These "sorrows of empire" will undoubtedly continue to mount inside the U.S. including increasing numbers of suicides and homicides of returned vets (examples here and here). 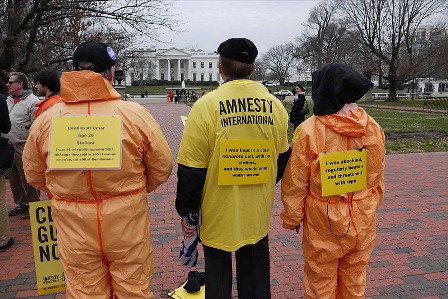 (That's me on the far right in the "Gitmo orange" jumpsuit looking at the White House.) 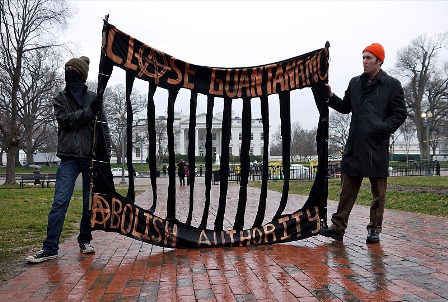 (D.C. Occupiers used this great visual that accurately depicts how we are all held captive to the lawlessness and tyranny of military empire.)

I got interviewed by The Real News in front of the White House at the Close Gitmo action in Washington, D.C. on Jan. 11, 2012. Hundreds of protestors called for closure of indefinite detention centers, denounced torture and demanded due process for detainees.)

More at The Real News.

Not by coincidence, Jan. 9, 2012 was marked in Minneapolis as the 10 year anniversary of the Office of Legal Counsel memo written by Bush Administration lawyers John Yoo and Robert Delahunty. That OLC memo advised George Bush he did not need to abide by the Geneva Conventions (see Orange Jumpsuited Torture Protestors March To St. Thomas Law School | The UpTake). 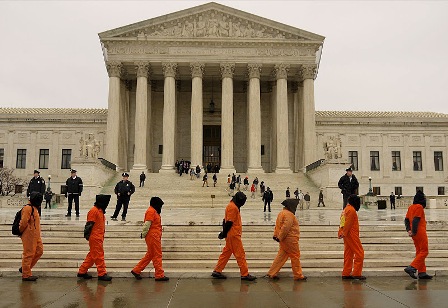 (Notice how the words above the Supreme Court claim "Equal Justice Under Law.")

Not coincidentally, however, a chance for accountability is arising outside the United States. Without the "state secrets" induced blindness that afflicts us here, a Spanish judge on Friday re-launched an investigation into the alleged torture of detainees held at the U.S. detention center at Guantanamo Bay, Cuba. British authorities have simultaneously launched a probe into CIA renditions to Libya. McClatchy News reports:

The twin developments demonstrated that while the Obama administration has stuck to its promise not to investigate whether Bush administration officials acted illegally by authorizing the use of harsh interrogation techniques, other countries are still interested in determining whether Bush-era anti-terror practices violated international law.

But it may be too little too late. A country that cannot look back and learn from its mistakes is doomed to repeat its mistakes. Not surprisingly, torture memo author John Yoo is amongst those most vigorously urging the U.S. to the unavoidable challenge of more war. Eerily similar to the lies and false hyping of Iraq's WMD that led to an unjustified and catastrophic war, we find ourselves perched on the brink of watching a new war break out, this time on Iran. It will, in all likelihood, be a repeat of the destructive invasion of Iraq but many times worse not only in terms of the millions of people who could be killed in the Mid-east, but also in terms of the potential blowback upon the United States and Israel. We could even experience the World War III that some neo-conservatives seem to long for.

And yet almost no one speaks out here in the U.S.! The Democrats have turned to war mongering almost to the same extent as the Republicans (with the exception of Ron Paul). Not only do most congresspersons and politicians of both parties give speeches in support of draconian sanctions (seen as war provocation) and stopping diplomacy, but they ultimately urge on this next war on Iran.

It seems more ordinary citizens must therefore take to the streets to demonstrate against war and torture.