WASHINGTON -- There's another call to boycott D.C.'s Metrorail system in response to a series of controversial anti-Muslim ads put up Monday that will be posted for the next month.

Rep. Mike Honda (D-Calif.) -- whose communications director Michael Shank, in his personal capacity as a professor at George Mason University, recently wrote a blog post for The Huffington Post about boycotting the Washington Metropolitan Area Transit Authority -- issued his own statement Wednesday:

"The right to free speech is a right I will defend to my grave. I understand why the US District Court is forcing Washington Metropolitan Area Transit Authority, against their will, to run the ad equating Muslims to savages. These are rights, however, that come with great responsibility and I hope that Americans will always use them responsibly. The right to not support hate speech is also a right, which is why I encourage people to boycott, if possible, WMATA (and in other places, like NYC, where the ad is running) until the ad buys are finished. We do not have to support hate speech."

WMATA was ordered by a federal judge to put up the ads, which have also appeared in New York City and San Francisco.

Sponsored by a group called the American Freedom Defense Initiative , the ads -- now up in four Metrorail stations -- read: “In any war between the civilized man and the savage, support the civilized man. Support Israel. Defeat Jihad.” (Adam Serwer at Mother Jones gets into the quote's origins -- it's a paraphrase of an Ayn Rand quote -- and interpretation.)

In New York, the ads have been spray-painted. They've also been met with law-abiding counter-campaigns. San Francisco's public transportation authority put up its own counter-ads, which emphasize that Muni "condemns statements that describe any group as 'savages.'"

In D.C., the response thus far has been low-key. While Metro has declined to put up its own counter-ads, Metro spokesman Dan Stessel told HuffPost that he is aware of "one counter ad that is expected to appear on the system in the next week or so."

DCist reports that the counter-ad will be put up by a progressive Christian group that also advertised in the New York City subway.

Rabbis For Human Rights - North America, which also advertised in New York, told HuffPost this week it is planning to expand its campaign to D.C. as well.

Metro spokeswoman Caroline Lukas told HuffPost that the one ad that was covered with Post-it notes aside, she hasn't heard reports of D.C.'s ads being vandalized.

Nor, Lukas said, has the call to boycott gained much traction.

"Obviously we had decreased ridership on Monday," she said. "But that's because it was a holiday."

Shank explained that while Honda is "a big supporter of public transit for environment reasons," the congressman only "uses some" public transportation in D.C., and is "primarily a Prius user."

UPDATE: Pamela Geller, the colorful executive director of the group responsible for the ads, emailed HuffPost a response to Honda's call to boycott Metro:

"Honda claims that the ad equates Muslims with savages. In fact, the ad doesn't mention Muslims at all. The idea that it impugns the character of all Muslims is a fiction invented by enemies of free speech such as the Hamas-linked Council on American-Islamic Relations (CAIR). The ad mentions jihad. It is asking people to oppose those who commit jihad attacks against innocent civilians, and those who celebrate the attackers as heroes. All jihad terrorists are Muslims, but not all Muslims are jihad terrorists. So why should any Muslim who opposes jihad feel his character impugned?

Honda says he is opposed to bullying and hate, but activity far more bullying and hateful -- that of jihadists in the U.S., is apparently fine with him: he has opposed Representative King's efforts to investigate jihad activity in U.S. Muslim communities. We are facing opposition from elected officials who have aligned themselves with the Muslim Brotherhood in the U.S., and with those who would undermine national security. I hope Honda's constituents realize on election day how he is carrying water for Islamic supremacist enemies of free speech."

“The right to free speech is a right I will defend to my grave. I understand why the US District Court is forcing Washington Metropolitan Area Transit Authority, against their will, to run the ad equating Muslims to savages. These are rights, however, that come with great responsibility and I hope that Americans will always use them responsibly. The right to not support hate speech is also a right, which is why I encourage people to boycott, if possible, WMATA (and in other places, like NYC, where the ad is running) until the ad buys are finished. We do not have to support hate speech."

"Throughout my tenure in Congress, I have been a staunch proponent of civil rights and the right to free speech. I am also an unwavering opponent of hate speech and bullying perpetrated against all communities, regardless of creed, race, gender, sexuality, disability, country of origin, and immigration status. This is why I founded, and now chair, the first-ever Congressional Anti-Bullying Caucus, exercising my first amendment duty to speak out against bullying. The Metro ad’s timing is particularly poignant as October is National Bullying Prevention Awareness Month."

"I take hate speech very personally. During WWII, my family and I were interned with more than 120,000 other Japanese Americans. We experienced overwhelming racial discrimination, and hateful billboards and caricatures that equated Japanese Americans to savages were commonplace. We learn from history that hate speech and hysteria have dire consequences, the result of societal complacency, failed political leadership, and the lack of courage to stand up and speak out against hate."

"If we allow hate speech to penetrate public discourse and become normalized, we are creating an incredibly hostile and discriminatory environment for Muslim Americans – an environment that allows for discriminatory and questionable surveillance, much like I experienced. The American Freedom Defense Initiative, who sponsors the ad, is hiding behind their constitutional right to free speech, only to spread hate and disseminate ads that only serve to heighten tension and incite violence between Muslims and non-Muslims. The time to speak up, and to boycott, is now – because I know we can do better.” 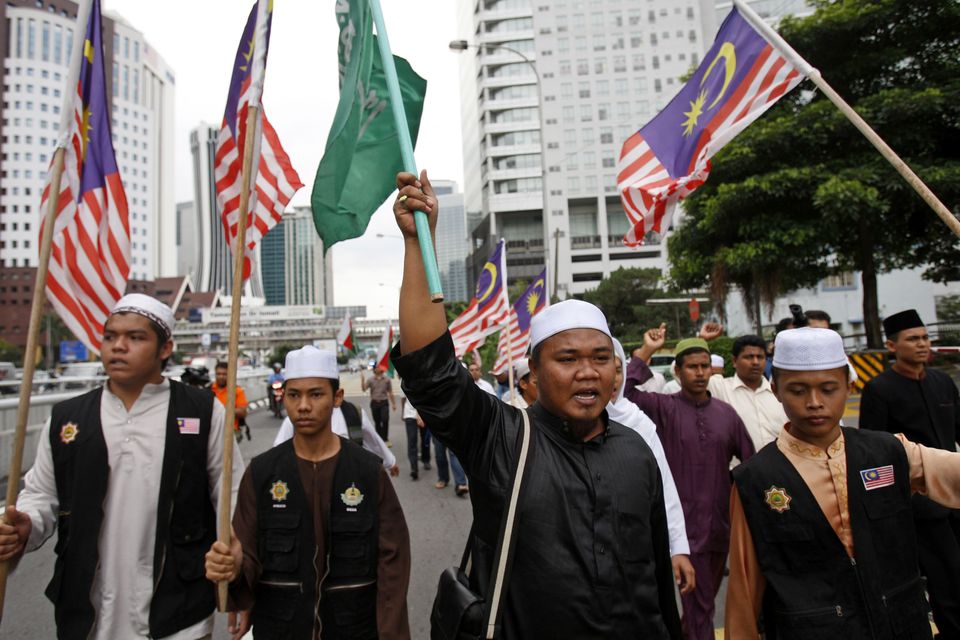