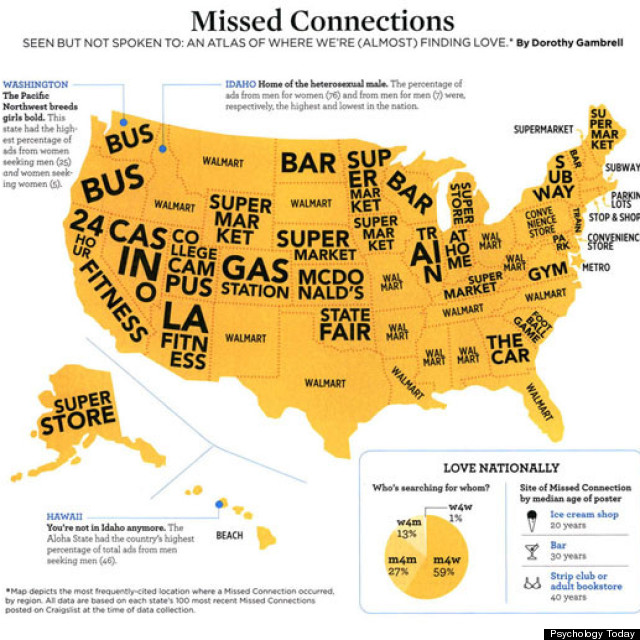 It's not just trains that are missed on the D.C. Metro, according to a new report. It's also love.

Does the guy or girl of your dreams often speed by you, sitting on the Metro train you just missed?

Have you ever ogled the person sitting twenty feet away from you on the Blue Line to Largo Town Center and wished you'd said "Hello"?

Do you often sit next to the love of your life on that Red Line train to Shady Grove only to have them get up and leave at Dupont before you could say a word?

Well, you're not alone.

According to a Psychology Today report in their January/February edition, most missed connections in the District happen on the Metro. (Indeed, on Tuesday, 31 such postings appear on the page.)

The study analyzed the "Missed Connections" Craigslist page to find out where people in each state most often see that special someone, but for some reason or another, are unable to connect in a more personal way.

D.C. wasn't alone in its lost subway love. New Yorkers and Massachusites also missed connections most often while stepping back to avoid the closing doors and keeping off the electrified third rail.

But enough of the theoretical. Check our slideshow of the ten funniest, most creepy, and most entertaining actual "Missed Connections" from the DMV -- only some of which arise from train encounters:

PHOTO GALLERY
Funniest, Most Creepy and Most Entertaining &#039;Missed Connections&#039;
Download
Calling all HuffPost superfans!
Sign up for membership to become a founding member and help shape HuffPost's next chapter
Join HuffPost

1 / 10
I Promise Not To Run You Over
When someone almost kills you, the least you can do is let them buy you coffee.
via Craigslist

D.C. Craigslist Missed Connections: Metro Is Where Love Is 'Missed' The Most
Best Marriage Proposals Of 2012
1 / 12
"Marry You" Lip Dub
Isaac Lamb's <a href="https://www.huffpost.com/entry/portland-proposal-video-e_n_1554435">flash mob/lip dub proposal</a> set to the Bruno Mars song "Marry You" was featured on dozens of news outlets, including "The Today Show." It was posted to YouTube on May 25 and now has more than 16 million views.