A spike in pain prompts Lyndly Wadley to call a shuttle service that will take him from his nursing home to his friend's apartment. Wadley, who has multiple sclerosis, then waits outside the building in his wheelchair, looking anxious. At his destination, he wheels up to a 10-step entranceway, lifts each leg out of the chair, grabs the handrails and begins to climb. It takes him a full minute to ascend each stair, dragging his legs behind. His friend carries up the wheelchair and they go into the living room. Wet with perspiration, Wadley lights a joint. Inhales. Exhales.

Wadley, 47, has been using marijuana illegally to treat his MS symptoms for seven years. A financial analyst before the illness lost him his job, Wadley's most salient feature is a big toothy smile, though he seldom shows it. Because he's not allowed to smoke in his Columbia Heights unit, he takes the MetroAccess van to this apartment near Howard University three times a week.

"I only go out to smoke marijuana because I have to," says Wadley. "It would absolutely, absolutely, make my life easier if I could just stay at home. Right now I have to worry about police, neighbors and eviction when I don't want to bother no one. I'm not trying to break the laws; I'm just trying to live." 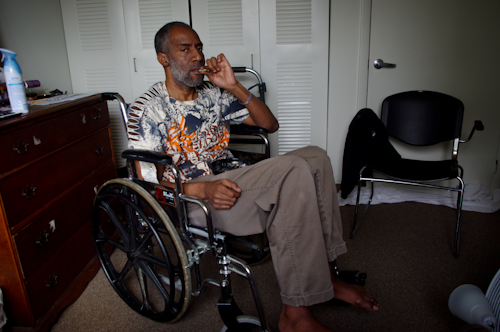 Though medical marijuana has been legal for patients like Wadley in the District of Columbia since May 2010, enacting the law has been stalled by squabbles over specifics, leaving some chronically ill people waiting for a promised medication. Patients face a lingering cannabis prohibition and therefore risk their employment or even jail time.

Though D.C. politicians have delayed the drug's implementation, California scientists have found evidence of its efficacy. This month, the first placebo-controlled study assessing the effects of smoked cannabis on symptoms of MS-related spasticity, done by the University of California Center for Medicinal Cannabis Research, will be published, providing new evidence the drug can have significant health benefits for MS patients.

Washington voters agreed in 1998 that medical marijuana should be legal, approving Initiative 59 with 69 percent of the vote. The bill would have allowed people to use medical marijuana under doctor's supervision. Unlike states, however, the District doesn't control its own finances, but requires budget approval by Congress. To block Initiative 59, Congress passed an amendment to the D.C. budget every year since 1998 withholding funding for it. But in May 2010, Congress lifted the restriction and the D.C. city council voted unanimously to implement the law, though not before adding restrictive amendment to the voter-passed initiative, adding the District to a list of 16 states where medical marijuana is legal.

Sitting in his small apartment, Wadley is noticeably too big for his wheelchair. He's 6-foot tall but, unable to afford his own chair, uses one that belonged to his 5-foot tall grandmother, his legs awkwardly positioned while his feet are in their holders.

Wadley didn't learn he had MS until was 38. Working as a financial analyst for the District in 2003, he started to get migraines and lose the feeling in his hands. Doctors told him he had MS, but before he could begin taking the recommended drugs, he was fired. Though he'd never told his employers about his diagnosis, Wadley assumes the early symptoms were one of the reasons for it. With no income or medical insurance, he moved into his parents Virginia home and, after receiving disability benefits, began taking prescription medications.

"Those drugs made everything worse," says Wadley. "I got sharp headaches, and my joints ached worse than usual. Sometimes it hurt too bad to get out of bed to go the bathroom, so I'd go on myself. I figured that was what adult diapers were made for, so I started wearing them."

Two years later, Wadley decided to stop the prescriptions because the side effects remained while the MS had worsened. Notably, his spasticity, the painful and involuntary contradictions of muscles, became more severe. When he heard talk show host Montel Williams, who also suffers from MS, touting the benefits of medical marijuana on television, he decided to try it. He started smoking an eighth of an ounce a week, whenever he felt paroxysms of pain in his joints or muscles. The migraines soon stopped altogether, and the pain diminished.

Research that will be published this month in the Canadian Medical Association Journal by the University of California Center for Medicinal Cannabis Research has found empirical evidence that marijuana treatments benefit MS patients who suffer from spasticity, says Igor Grant, a doctor who directs the center. Because the only legal source of marijuana is the federal government -- which rarely opts to distribute it -- it's nearly impossible for U.S. scientists to test the safety and efficacy of cannabis for treating medical conditions. The CMCR is the only research center in the country permitted to do so.

"My view is marijuana can and should be treated as a prescription medicine like any other controlled substance," says Grant. "It's not an innocuous agent -- it can cause changes in perception, reaction time, mentation and even addiction -- but it's been found to have a significant health benefit for patients suffering from spasticity."

Hoping to avoid abuse of the drug, the D.C. bill sponsors have created one of the country's most restrictive programs; sitting in the federal government's backyard, they feared a future Congress could reverse the law if marijuana use became widespread.

Deciding the original 1998 bill was not conservative enough to assuage those fears, D.C. councilmen added amendments to limit legal cannabis to people with HIV/ AIDS, cancer, glaucoma and multiple sclerosis.

"Patients won't be able to simply walk into a doctor's office and leave with a recommendation for marijuana, as they can do in states like California," says Dan Riffle, legislative analyst for the Marijuana Policy Project. "They will need a bona fide relationship with their doctor."

These amendments combined with a mayoral dispute over which agency should have oversight, led to postponements in implementation, says Riffle. It was only in March that the city Health Department announced the six companies that will be allowed to grow cannabis.

The restrictiveness means some who would qualify in other states, like California and Colorado, wont qualify in the District. Patrick Montague, a 47-year-old IT equipment salesman and Wadley's college friend, smokes marijuana to reduce the pain from two herniated discs in his back, the result of an auto accident. Because chronic pain isn't one of the qualifying conditions in the D.C. legislation, Montague won't be able to legally purchase cannabis.

"I feel like a second-rate patient," says Montague, comparing himself to those who qualify. "I succumb to pain just like they do, so why shouldn't I be allowed access to the same medication?"

After Montague began smoking in 2008, his lawyer advised him to get a recommendation for cannabis from a doctor in California, where chronic pain is a qualifying condition. That way, if Montague did get arrested for possession, it might be easier to prove he's a medicinal patient. So for four years, Montague has flown annually to California to renew his permit.

"My medicinal marijuana card is more important to me than my driver's license," says Montague. "It makes me worry less about getting in trouble for something that increases my quality of living."

The licensing process for dispensaries is scheduled to be completed in June, so if all goes to plan, patients will be able purchase cannabis by the end of the year, says Riffle.

"While the dispensaries and cultivation centers are getting their leases and zoning permits in order and preparing to open, the Health Department should issue paperwork for physicians so that patients can begin registering," says Riffle.

Though empirical studies and anecdotal evidence indicate marijuana can be an effective medical treatment, the drug's detractors point out there currently are no reliable sources for obtaining it. In the states where it's legal, patients don't know how strong the cannabis is or how much of it to use.

"A doctor can't say he wants patients to smoke three joints a day at five percent potency, so people are forced to self-medicate," says Herbert Kleber, director of the Division on Substance Abuse at New York State Psychiatric Institute. "I believe we should not be using as medicine an agent that isn't checked for potency, purity or consistency."

Kleber argues that patients should instead take drugs like Marinol, an FDA-approved synthetic form of THC, one of the active ingredients in cannabis. However, patients like Joe Prendergast, who have had a chance to compare to two, insist that marijuana is more effective. Prendergast, a 47-year-old technician who was prescribed Marinol for three years to mitigate the symptoms of his HIV medications while he was working in the military, says the effects of smoking are more immediate than a pill and that Marinol is more expensive.

"If you had a migraine, would you take an aspirin if it took over an hour to kick in?" says Prendergast. "Or would you prefer something that relieved pain instantly?"

In pain on a Saturday, Wadley wants to smoke. But MetroAccess doesn't come on the weekends unless a user makes an appointment during the week, and he didn't plan ahead. He's reluctant to smoke inside because he could get kicked out of his nursing home if he's caught again. Most of the residents are decades older and, he says, fond of gossip.

"They're allowed bottles and bottles of meds, but they don't let me smoke mine because it smells bad," he says, with chagrin. "I don't want to give these folks nothing too talk about."

Nevertheless, Wadley decides the relief would be worth the risk. He wheels into his bedroom, places a towel below the door, and closes the blinds. His fingers aren't nimble enough to use a lighter, so he takes out matches. Striking the box repeatedly, he eventually lights the pre-rolled joint. Inhales. Exhales.