WASHINGTON -- When Marla McGuire was hired as a librarian at Cleveland Elementary School in the District of Columbia some four years ago, she was first librarian at the school in eight years. McGuire worked to raise $50,000 for new materials, collaborated with other teachers to create an outdoor classroom and encouraged parents to read with their children.

"I really tried to embed myself in the school community," McGuire told The Huffington Post. "I wanted to focus on a love of learning and really get a spark going."

Soon, children who came to her knowing nothing about libraries -- a student once asked her timidly how much it might cost to "rent" a book from the school's collection -- got excited about reading, she says.

But McGuire will not be returning to Cleveland Elementary next year. D.C. Public Schools announced in May that it was cutting allocated funding for librarians at schools with less than 300 students, and that the job is now a “flexible funding” position rather than a “core” one at schools of all sizes, meaning librarians' salaries will be drawn from a general pool of money that the school must disperse for many needs.

According to Chancellor Kaya Henderson's office, 58 of the 124 D.C. schools will not have a librarian this year -- up from 34 last year.

As the cuts take effect, parents, local librarians and national experts are voicing concern that an achievement gap could emerge between wealthier neighborhood schools with better outside resources and their poorer counterparts, like Cleveland Elementary, located in D.C.'s Shaw neighborhood.

Leading the charge for librarians has been the Capitol Hill Public Schools Parent Organization, which has held bake sales and demonstrations throughout the summer to draw attention to the issue.

The organization also recently launched an online petition demanding that all D.C. public schools have at least a part-time librarian, and that the position be returned to core status.

The parents have received support from some local politicians. Councilmember Jack Evans (D-Ward 2) told HuffPost that if Chancellor Henderson does not replace the lost librarians, the D.C. Council should step in.

“Either the chancellor should do it or we should,” Evans said. "It always strikes me that we have one of the largest school budgets in the country but we can't afford librarians for all of our schools."

The chancellor’s office, however, has stood firm on the decision.

"In these tough budget times, we have to make tough budget choices," Melissa Salmanowitz, a spokeswoman for the chancellor, wrote in an email.

The decision to eliminate the librarian funding from small schools “was not made easily,” Salmanowitz said, adding that "we'll use creative solutions through community partnerships to help staff the libraries."

However, the disparity between local neighborhoods' capabilities to compensate for lost funding is among the top issues for parents, according to Peter MacPherson of the Capitol Hill Public Schools Parent Organization.

MacPherson said his main concern was for poorer families with fewer resources.

McGuire, the librarian, said that Cleveland Elementary parents had tried briefly to organize and raise funds for their library, but were not successful.

In contrast, MacPherson cited the example of Lafayette Elementary in the affluent neighborhood of Chevy Chase, where he said parents contribute $10,000 a year to support the library.

“Schools should be an equalizer,” MacPherson stated, voicing his worry about a worsening “have-and-have-not divide.”

MacPherson said he and other parents take issue with allocations in the DCPS budget, calling D.C. “awash in education spending” and officials unresponsive to parents' concerns.

The chancellor's office recently proposed a meeting where parents can air their grievances, but MacPherson said he has "fairly low expectations" for it.

Along with California, Arizona, Ohio and Michigan, D.C. is one of the “hot spots” for library and librarian cuts around the country, according to Susan Ballard, president of the American Association of School Librarians. Ballard said she worries that children's future opportunities are at risk if they fail to learn basic research and Internet skills.

"It's going to take a terrible toll on our students' ability to be competitive in college and in the workplace, and we are very concerned," she said.

For all the anger and frustration that MacPherson says he and other parents feel, he noted that there is an upside to the librarian question: It has brought typically argumentative parents and concerned citizens together.

“Everyone in the city is a stakeholder in this,” he said.

For her part, McGuire, whose job had already been cut to part-time, decided to quit rather than wait to be laid off. 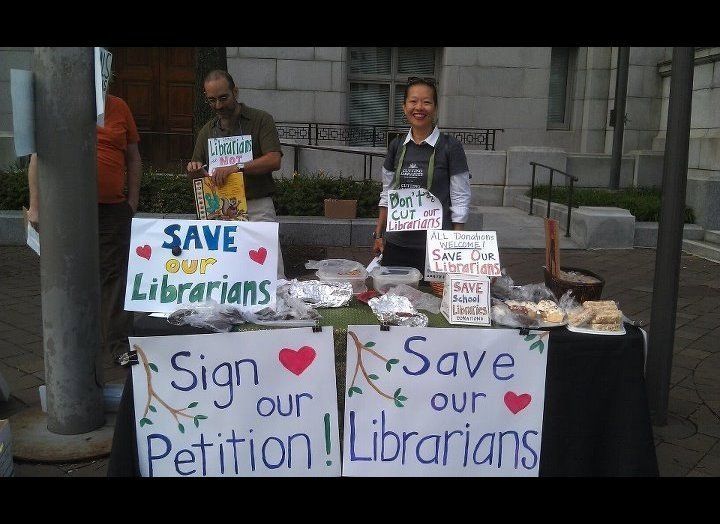 1 / 6
Members of the Capitol Hill Public School Parent Organization hold a bake sale in July outside the John A. Wilson Building to raise awareness of the cuts to school library programs.
Susan Bauer