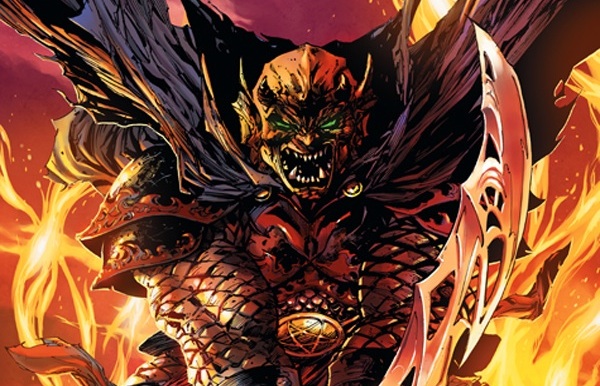 Last week we brought you an interview with writer Paul Cornell, where the British Science Fiction writer talked about his work on DC Comics' Stormwatch. This week sees the launch of the brand new Demon Knights, also part of DC's The New 52 initiative. We talk with Cornell about the gritty fantasy series, and how he juggles writing for comics, TV, and novels.

Cornell calls Demon Knights a "medieval Magnificent Seven." The book puts the classic Jack Kirby creation "Etrigan the Demon" -- an ill-tempered fiend with a penchant for rhyming bound by the wizard Merlin to the mortal Jason Blood, a knight of King Arthur's Round Table -- at the center of a motley group of characters in the medieval age. Ten years ago, the idea of a medieval fantasy ensemble book being part of the vanguard of a publishing initiative would have seemed preposterous. Yet, in the wake of the Lord of the Rings films, fantasy has never been stronger as a genre, and dark fantasy is newly ascendant.

"If you watch Game of Thrones," says Cornell, "or if you play Dragon Age, you'll know where we are. That kind of harsh modern take on medieval fantasy."

Cornell points to the tone George R.R. Martin, creator of novels Game of Thrones is based on, as a source of inspiration for the Demon Knights.

"In terms of the harshness of the world that they live in and the fact that there is no safety net, something that I think George took -- I'm proud to say I'm mates with George, which is very nice -- that he kind of took a look at what epic fantasy had become and took the safety net away, really. I think that's where we got modern fantasy from and I think that's the flavor we're going for."

"It's that sense of anything could happen at any moment and there's no support system. There's no backup. You're liable to get a dagger in the back. And we say that very clearly in the first issue, and there'll be some further surprises in further issues."

Thanks to the internet some of those surprises have gotten out ahead of the actual issues. In one case that meant gorgeous art of a fight between the team and a pack of dinosaurs in the second issue of the series. Cornell laughs when I broach the topic with him.

That particular splash page shows that while the series may adopt the grim tone of modern fantasy, the series will feature Cornell's penchant for putting together unlikely casts of characters and playing them off each other to great effect. The sight of classic DC villain, the immortal Vandal Savage (who played the heavy in a few issues of Cornell's run on Action Comics) fighting dinosaurs with a battle axe, is a kind of fanboy fever dream. Doubly so when you consider that Savage is one of the "good guys" in this series. While Cornell might have liked to have kept the dinosaurs close to the vest, the marketing muscle behind the relaunch of DC Comics has paid off handsomely so far.

"I can't quote numbers obviously, but our initial orders were great. Our post publicity numbers have been fantastic. That's the lovely thing about The New 52, what previously would have been regarded as marginal books are looking pretty damn healthy, and Demon Knights is selling really well. So, I think think Vandal Savage fighting dinosaurs with an axe may be part of that."

The "anything goes" nature of the image also acts as a guarantee that the book won't be all a matter of doomed realpolitik, the harshness of the world Cornell is building still leaves room for characters the readers can root for.

"I hope that people become romantically attached to our heroes like the Magnificent Seven because, they are at least competent," says Cornell of his cast, "and if you haven't got noble, you can settle for competent. Not all these guys are noble, Etrigan especially doesn't want to be that, but you know, some of them are fighting for themselves. Some of them do have causes that have nothing to do with where they end up. But because they are in a pinch, and can't get out of it, we will see them put to the ultimate test. This is something I'm really, really keen on. There's quite a lot of extremity in Demon Knights."

Cornell is busy with Demon Knights and Stormwatch for the relaunch, but that's not the full extent of his writing work. In addition to comics and prose novels, Cornell is a veteran writer for television, including popular episodes of the BBC series Doctor Who. While all of his work displays his love of big ideas and high stakes danger for his characters, Cornell's process for the different mediums is "hugely" different.

"I even find it difficult to write the two different things on the same day," he says, "although I increasingly have to. It's all about basically how you put it on the page, and they're very different beasts, and you cant tell the story in the same way. If you get too much into telling one particular way you'll be useless to telling it another. I've managed to get some gears going, so I can change gears. But it's a tough ask. Initially, it takes a bit of learning."

He gives an example of the challenge of translating the simplest screenplay action into the freeze frame world of comic book panels.

"Very hard to describe: he goes through a door and shouts from the other side, which you can just write in a television script. In a comics script, that's hellish. What panels are those exactly? Are we seeing [him] heading to the door? The shouting from outside the door? What are we just going to see a panel with a door in it with a speech balloon coming out? Come on! As you can see this is my life. It's terrible."

Just don't expect him to be giving it up any time soon.

Demon Knights hits comic book shops and that magical portal known as the Internet (via the DC Comics and Comixology apps and website) tomorrow.