The passenger pigeon, the dodo and the woolly mammoth are just a few of the species wiped off the Earth by changing environments and human activities.

Now, advances in biotechnology could enable scientists to bring extinct animals back from the grave. But critics argue the practice would only hinder conservation efforts, by resurrecting creatures that could not survive in the wild.

First popularized by Michael Crichton's novel "Jurassic Park," the process of de-extinction has become more than a sci-fi concept. In 2003, biologists brought back a Pyrenean ibex by making a clone of frozen tissues harvested from the last of these goats. The clone died within minutes of its birth due to a lung deformity, but the experiment proved de-extinction was possible. [6 Extinct Animals That Could Be Brought Back to Life]

"We can use some of these techniques to actually help endangered species improve their long-term viability," said ecologist Stanley Temple of the University of Wisconsin-Madison. "Where it gets controversial is when we start talking about species that have been extinct for a very long period of time," Temple said.

The passenger pigeon filled the skies of North America in flocks of millions during the 19th century. But hunting and habitat destruction steered the birds to extinction. The world's last passenger pigeon, Martha, died in 1914 at the Cincinnati Zoo in Ohio.

But what if scientists could bring them back? Writer and environmentalist Stewart Brand, founder of the Whole Earth Catalog, and his wife Ryan Phelan, founder of the genetics company DNA Direct, wondered if it were possible. Working with Harvard biologist George Church, they figured out a possible way to revive passenger pigeons.

You can't simply clone a passenger pigeon museum specimen, because they no longer have fully intact genomes. But there could be another way: Using fragments of the passenger pigeon DNA, scientists could synthesize the genes for certain traits and splice the genes together into the genome of a rock pigeon.

But that's not the only extinct animal scientists have their sights on reviving.

Other scientists dream of bringing back a beast that roamed the Earth hundreds of thousands of years ago: the woolly mammoth. 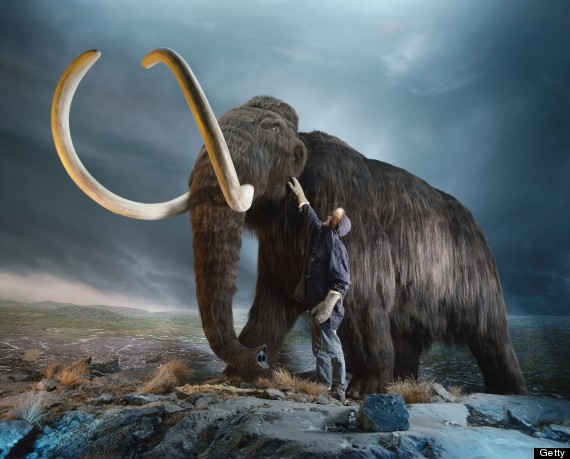 This photo shows a museum worker inspecting a replica of a woolly mammoth (Mammuthus primigenius), a relative of modern elephants that went extinct 3,000 to 10,000 years ago.

Well-preserved mammoths have been dug out of the Siberian tundra containing bone marrow, skin, hair and fat. If a living mammoth cell were found, it could be grown in a lab and coaxed to form an embryo. The embryo could be implanted into the closest living relative of mammoths, an elephant, which would give birth to a baby mammoth. [Images: 25 Amazing Ancient Beasts]

Finding a living mammoth cell is very unlikely. But South Korean biomedical engineer Insung Hwang hopes to find just a cell nucleus and produce a clone from it, like Dolly the sheep. The nucleus would be implanted into an elephant egg whose nucleus had been removed. But this is no easy feat — no one has yet successfully harvested an elephant egg.

The challenges aren't trifling. Even if researchers succeed in creating a mammoth, passenger pigeon or other extinct creature, it has to survive in the wild. This means having the right food and habitat, and evading predators — especially humans.

Critics of de-extinction say reviving extinct animals would do more harm to conservation efforts than good.

"I don't think it has any merit at all," said conservation ecologist Stuart Pimm of Duke University, N.C. "It totally ignores the very practical realities of what conservation is about."

The prospect of bringing species back from extinction would lead Congress to support the destruction of natural habitats, because animals that go extinct could be revived in a lab, Pimm told LiveScience.

Most species are going extinct in tropical forests, Pimm said. Saving a species through de-extinction when humans are burning forests and destroying native communities is a joke, he said.

Biologist David Ehrenfeld of Rutgers, The State University of New Jersey, agrees de-extinction would impede conservation. "It's very negative, very expensive and not going to achieve any conservation goal as far as I can see," Ehrenfeld said.

For example, the passenger pigeon was a very social bird known to form flocks of millions. When their numbers dwindled to a few thousand, the birds stopped breeding, Ehrenfeld told LiveScience. De-extinction methods would produce just a handful of birds, so "who's to say they would reproduce?" he said.

What's more, the pigeons that raised them would be a different species, with differing mothering techniques. "The environment is different in every respect," Ehrenfeld said.

Temple took a more moderate view. "If we're going to try to do this seriously, it's probably in everyone's best interest that the early attempts have a high probability of success," he said.

Resurrecting a creature like the passenger pigeon or woolly mammoth has a strong appeal to the public's imagination, Temple said. "But the species that are often hyped don't meet those criteria at all," he said.

Editor's Note: This article was updated at 11:45 a.m. ET August 19 to correct the age when woolly mammoths existed.