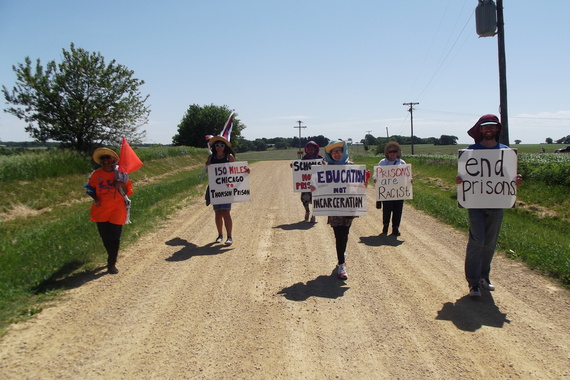 Along with VCNV companions, I'm part of a 150-mile walk from Chicago to Thomson, IL, a small town in Northwest IL where the U.S. Bureau of Prisons is setting up an Administrative Maximum prison, also known as a Supermax. Prison laborers from U.S. minimum security prisons now labor to turn what once was an Illinois state prison into a federal supermax detention facility with 1900 cells that will confine prisoners for 23 hours of every day.

Drivers seeing us with our signs often wave or honk approval as they whiz past us on the road. "Education not Incarceration" says one sign; "Build hospitals, not Prisons," says another. But yesterday, a woman speaking with Maya Evans, who is from the UK, surprised us with her venom. After listening to Maya's suggestion that U.S. people would be better off spending resources on health care and education, the woman said, "Well, if we would shoot the bastards we wouldn't have to put them in prison." Razia, from Pakistan, also a walker, said "That's what President Obama does overseas with the drone attacks."

Razia's right, I think, and sadly, as Adam Hochschild recently wrote in an article entitled "Our Awful Prisons", "this prison-industrial complex is now as deeply rooted as its military counterpart. With both corporate profits and government salaries at stake, it will be equally difficult to shrink or transform."

Hochschild also notes that 67.8 percent of U.S. prisoners return to prison within three years of their release. Who benefits from this system? Who are Senator Durbin and Representative Bustos aiming to please by favoring construction of a Supermax prison in Thomson, IL?

Each morning, before we begin walking, we form a circle and spend a short time thinking, together, about eventual inhabitants of the cruel cells we're walking toward. Inmates will live in tortuous solitary confinement. How will their punishment affect their families and, for that matter, the employees assigned to punish them?

I think of the Celestial Ministries Drum Corp in Chicago's Lawndale neighborhood, one of the poorest areas of Chicago. These talented young teens pound mightily on their drums, creating magnificent sound, fierce and compelling. They are children of parents who are incarcerated. Stanley Ratliff, a former prisoner, founded the Celestial Ministries Drum Corp after his own son was killed by gun violence. He wanted to help keep young people in his neighborhood from being part of the "rail to jail" syndrome, and so he and other volunteers staff a center where the children can find community and an outlet for their artistry. Interestingly, President Obama gave clemency to Stan himself, reducing his prison sentence.

The solution to our awful prison problem is contained in the story of President Obama, Stan and the Celestial Ministries. Make a preferential option for those who are most impoverished, in our midst. We might fund these efforts by taking money away from the corporations promoting criminal attacks on innocent people in other lands.

Here in Oregon, IL, hawks fly above the Rock River. They catch the thermals and needn't flap their wings. At Stan's Tacos, downtown, the owner told me that eleven eagles will perch in a tree by the river. People come from afar just to see them. Another sort of Celestial Ministries.

The military also marvels over these birds. They named one of their newest weaponized drones "The Grey Eagle." A surveillance drone is called "The Global Hawk."

These military birds of prey will never enable us to solve our deep and profoundly troubling social ills, nor will they help us learn how to heal those who suffer because their basic needs aren't met. The actual hawks and eagles, circling above, also suggest an answer. We can't have a birds-eye view of the many prisons across the U.S. But we can find ways of getting to know the prisoners. Half of our walkers this week have been prisoners themselves, their confinement having stemmed from participating in a variety of civil resistance actions protesting injustices and wars.

Becoming a prisoner on purpose is one way of getting to know more about who goes to prison and why, and I highly recommend this way. Correspondence with prisoners, becoming part of a prison visiting program, and teaching a course inside a prison are other fine ways of becoming connected. We can also contact elected representatives to demand de-incarceration and an end to the U.S. status as the country with more prisoners, per capita, than any other country in the world.

And we can do our best to hear from and learn from the counterparts to Chicago's wondrous Celestial Ministries Drum Corp, assuring that they'll never be beaten into submission of a solitary confinement cell but rather lead us to the tune of a different drummer, the one the Rev. Dr. Martin Luther King called the drum major for peace.