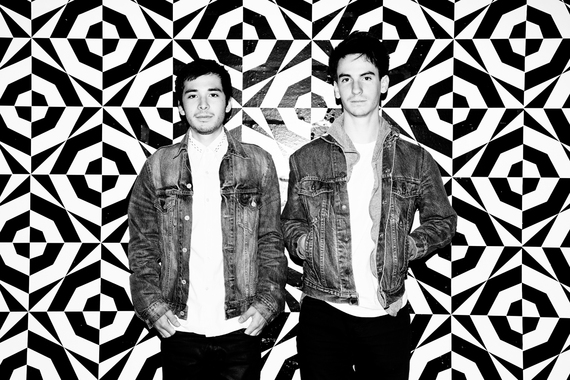 When a young band's first single garners comparisons to The Talking Heads and LCD Soundsystem, you may need to forgive them for getting excited about the promise that the New Year holds. For Los Angeles-based Sean Guerin and Isaac Franco, the multi-instrumentalists crafting post-disco music as the band De Lux, they have a lot to be excited about.

They headlined The Echo in Los Angeles last Thursday night for a show that "felt really good, and felt comfortable", according to Guerin, despite it being only their ninth show ever.

And yet, babies whose composure on stage shows they've been influenced in the best possible way by the groups they grew up listening to: James Murphy's LCD Soundsystem, The Rapture, as well as British electronic band Hot Chip, bands that all "put a really good spin on the old school disco stuff."

Thanks in part to coverage on the music magazine FADER and internet public radio station KCRW, among others, the venue was filled by fans and onlookers curious about the rising group. De Lux's music tips their hats to the aforementioned bands, but it's after something greater than mere mimicry. The music they're after, according to Guerin, is a sound akin to disco that "makes you feel cool. Your own kind of cool."

That chase is already paying dividends, as the laidback grooves attracted a capacity audience that showed no signs of weariness at songs that stretched past six and seven minutes.

"The energy that it brings is enjoyable. It's a feel-good," Franco said. "We've been on dance for a while now, so it's interesting since it's getting more popular, and our album release is catching that wave."

Their new album, titled "Voyage", will continue in the style of new wave disco and will lean heavily on lyrics and personal experiences. "It's not necessarily a dance record. We're not trying to make dance music," though Franco did concede that stylistically the music seems to end up that way.

"Each song has its own unique sound. There's not two songs on there that sound alike," Franco said." You can tell it's the same artist that wrote all these songs; each one has its own flavor, which I like."

This will go a long way in helping the band continue to separate themselves from their idols and secure their own identity. In looking at De Lux's recently released EP, one finds songs titled "Love Is A Phase", "Move Through Your Memories", and "Better At Making Time", which all allow for ruminations on time and love, and save you from the radio ready commands of club-ready dance bangers. De Lux makes it possible to dance, think, dance, wonder, and dance some more. 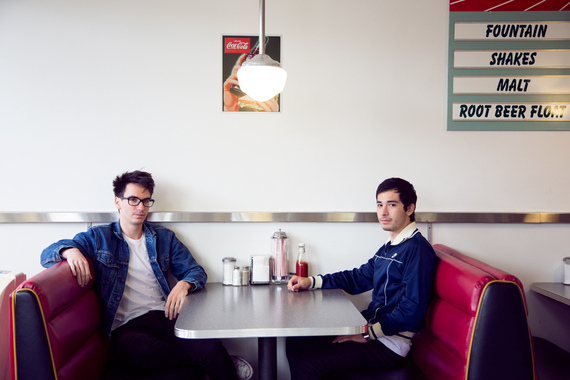 Despite the genre's proclivity for movement, De Lux won't hold you to that.

"You're not expected to dance," Guerin said. "If we come up with a non-dance song or something we really like, we'll use it."

The two create music by working off of the same instrument until either Guerin or Franco finds a riff or rhythm they like. At that point, they move to the next instrument, and so on, until they've crafted the song. Speaking about their heavily collaborative style, Guerin said, "There's no ego. We just want to write music we can listen to ourselves."

That lack of ego can also be seen in their desire to embrace happenstance and fortune and to not get hung up on perfection.

"We don't re-record very often. If we're jamming over a section and I play something that sounded really cool, we'll keep it," Guerin said. "Even if I didn't play it a bunch of times, we'll loop it. It's that first take that's memorable. I don't want to lose that."

This is most noticeable in the bass line for "Better At Making Time." It cropped up while Franco was getting ready for practice for their previous band. Guerin encouraged him to record it, and the impulse to bottle lightning is proving to be a good one.

With an engaged fan base and supportive new label (the two signed to Innovative Leisure last year, home of Classixx and Hanni El Khatib), De Lux is gathering momentum as they move toward their album release in April (and a second in the near future). They're curious what might have happened had they stuck with plans to release the album when it was finished recording last March, just before Daft Punk's new record, and well before Arcade Fire started doing disco with James Murphy.

Nevertheless, they remain optimistic, and find it "interesting to be after the whole wave of cool live disco," Franco said.

To create their own brand of cool live disco, they bring in a handful of other musicians to perform with them on stage. De Lux's approach to the live show follows that of their recording philosophy in that perfection and repetition are to be avoided. By no means are they married to the music the way it was recorded. In fact, Thursday's version of "Better At Making Time" ended with what Guerin called a "jam disco."

"We like putting the crowd on edge" Guerin said. "We're really looking forward to people knowing our album, [so that] we can mess with them. We can restructure the songs."

That willingness to improvise, jam together and to actively skirt stagnation speaks to a boldness and maturity surprising for such a young band, and foretells a promising future.

Even if their next gig is only their 10th.

You can download their EP from Scion AV, which includes "Better At Making Time."

De Lux's debut full-length album "Voyage" will be out April via Innovative Leisure.