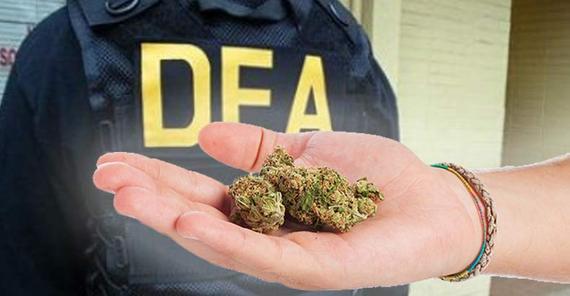 Many marijuana activists and reformers were disappointed recently when the U.S. Drug Enforcement Administration (DEA) issued their long anticipated "big announcement" of the summer and marijuana wasn't rescheduled. Rumors had been swirling for months that DEA would re-schedule marijuana, moving the prohibited substance out of Schedule I and into, well, no one really knew because there was really no substance to the rumor. As an observer of the marijuana reform movement for nearly four decades, this writer never gave the rumors any credence. DEA will reschedule marijuana the day after they pry Charlton Heston's cold dead hands from his NRA rifle.

The DEA did take some action and it is significant. Essentially they announced the end of a monopoly. For fifty years, and perhaps longer, the University of Mississippi has been the only legal producer of cannabis in the United States. The DEA announced that will change. The National Institute on Drug Abuse (NIDA) has awarded the contract to Ole' Miss for decade after decade and the University has been providing researchers and a few medical patients with what passes for marijuana in the federal government's thinking but which most legal users describe as "ditch weed."

I once visited the Mississippi "pot plantation" and was taken aback with how small the acreage actually is. It was in September 1978 and the medical marijuana movement was picking up steam with four states enacting laws that authorized intrastate research using federal supplies of marijuana. In 1979 that number would grow to 20-plus and it was clear that the "pot plantation" could not possibly provide the amount of marijuana the states would require to make these research programs a reality. The feds were able to short-circuit the state medical marijuana research programs by releasing synthetic delta-9 THC (a.k.a., Marinol) and for the next thirty years the Ole' Miss pot plantation just kept rolling along, servicing a handful of legal medical marijuana patients and researchers still trying to find the "harm" in marijuana.

Then the "Eureka" moment occurred. Researchers discovered the endogenous cannabinoid system (ECS) in the 1990s and cannabis research would never be the same. This discovery of an entirely unknown physiological system--found in every mammal -- set the scientific community abuzz. In particular the community was excited about a little known cannabinoid, CBD, which seemed to have a multitude of therapeutic properties but none of the pesky psychoactive properties associated with THC.

Simultaneously in the U.S. there was a new round of state laws being enacted, this time via the ballot box. Medical cannabis patients found their voices and loudly demanded legal access. Entrepreneurs began growing cannabis and, most importantly, openly discussing and experimenting with different strains. Think Charlotte's Web and you get the picture. Cultivators of legal cannabis began to conduct the experiments that NIDA and DEA should have done years before. And countries like Israel, Spain and Canada began developing strains of cannabis that gave legitimate researchers the cannabis they needed to explore the wonders of the ECS. The U.S. government had missed the boat, the golden age of cannabis research had sailed without them.

U.S. researchers, of course, were the ones who got the short end of the stick. DEA continued to play their well known game of obfuscation, NIDA continued its mantra about "only researching the abuse of marijuana, not the therapeutic aspects," and FDA sought the moral high-ground by claiming it would treat applications for cannabis therapeutics the same as any other. Collectively it was the head-in-the-sand approach that has characterized the federal agencies from the very first days of the medical cannabis movement. This time, however, the whole world was watching, and moving ahead.

The U.S. government can no longer ignore the advances in cannabinoid science and Ole Miss is no longer adequate to meet the demands of researchers and industry. DEA had little choice but to expand the number of legal cultivators. The real question is: will any one apply to grow? The DEA has promulgated regulations regarding their new policy that will deter most, including the implication that growers with any involvement in non-legal growing of cannabis will not be considered. This is thought to include growers from legal states.

And DEA will still hold the cat-bird seat since they get to determine "the number of bulk manufacturers necessary to 'produce an adequate and uninterrupted supply of [cannabis] under adequately competitive conditions for legitimate medical, scientific, research, and industrial purposes.'"

Ultimately, at least to my thinking, the announcement is meant to clear the way for those pharmaceutical companies who have stayed the course with year-after-year of research and are now preparing to bring a product to market. In particular G.W. Pharmaceuticals could be the big benefactor of this change in regulation. Their pediatric epilepsy drug, epidiolex, has continued to excel in Phase III studies and it is expected that a New Drug Application (NDA) will be filed in early 2017. Once approved the CBD extract will be available nationally for use in treatment of childhood seizures but off-label use of the drug is certain to occur and DEA's August 12th announcement gives G.W., and other pharmaceuticals a way to "grow their own" in the U.S., with DEA's blessing and oversight, of course.

As for rescheduling: don't hold your breath. In the end it will be CBD that gets re-scheduled. Cannabis, the whole plant, will likely remain in Schedule I. Precedent for this hypocritical scheduling is already in place with delta-9 THC in Schedule III while the cannabis it is derived from is in Schedule I.