Chinese authorities have a new mystery to ponder after 1,000 duck carcases were found floating down the Nanhe river in the country's Sichuan province on Tuesday.

As with the puzzling count of dead pigs -- now totaling 16,000 -- found in the Huangpu river and its upstream tributaries in the last several weeks, the government has yet to offer an explanation for the phenomenon.

Liang Weidong, an official with the county's publicity office, told Xinhua, China's state news agency, the rotten birds had been found tucked into 50 woven plastic bags, from which they were removed before being sanitized and buried. As the Nanhe is not a source of drinking water, authorities say the waterfowl pose no threat to public health.

That assurance, however, seems to have had little effect with some Chinese citizens voicing their distrust on Sina Weibo, China's version of Twitter. Writes one person, in a translation provided by Financial Times, “How can you tell they are harmless when you don’t know how the ducks died?”

Another poster, under the username Baby Lucky, added via the BBC, "Dead pigs, dead ducks ... this soup is getting thicker and thicker."

Though the appearance of ducks is a new development without even a speculative explanation, the Wall Street Journal has tentatively linked the pig carcasses to questionable "deadstock disposal" practices in the country.

Any outbreak of disease at large Chinese farms can trigger questionable disposal techniques of dead animals, explains CBS , particularly as officials have cracked down on the sale of illegal and contaminated pork products. Given the sudden lack of illegal buyers, it appears farmers have begun dumping tainted animals in the river.

"Ever since the police have stepped up efforts to crack down on the illicit market of sick pigs since last year, no one has come here to buy dead pigs, and the problem of pig dumping is worse than ever this year," said an unnamed villager to the state-run Jiaxing Daily newspaper, in a translation provided by CBS.

Carcasses are only the latest ailment to tarnish China's waterways. According to a January report by Voice of America, 40 percent of China's rivers have been classified as "seriously polluted."

In February of this year, a Chinese entrepreneur by the name of Jin Zengmin offered his local environmental protection bureau chief 200,000 yuan ($32,000) to swim in a nearby river tainted by industrial runoff. The officer refused, then explained his department was "not responsible" for the pollution. 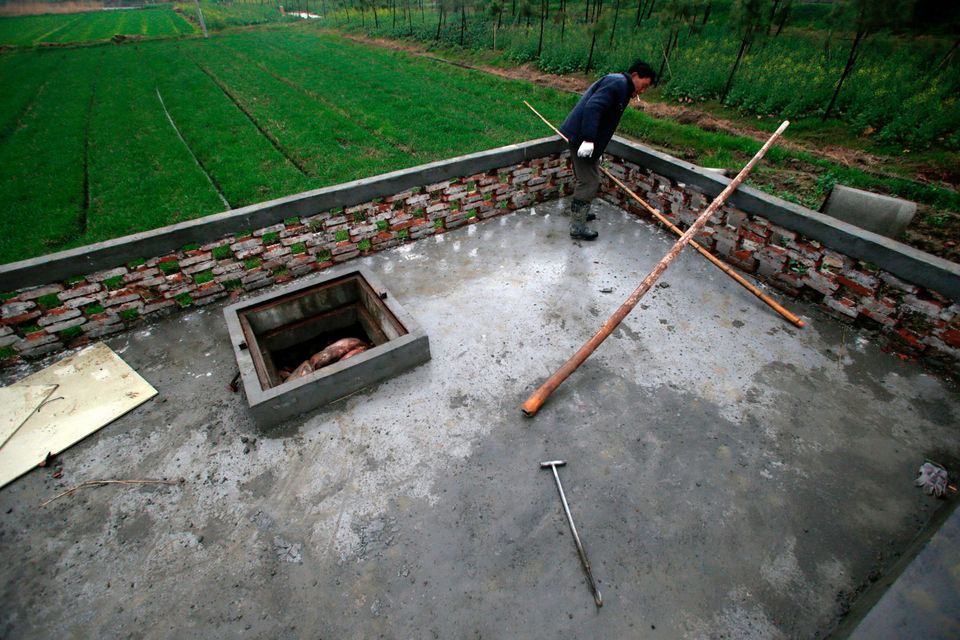 1 / 26
A villager dumps dead pigs into a decontamination storage built on a farmland in a town in Jiaxing municipality, east China's Zhejiang province on March 13, 2013. (AFP/AFP/Getty Images)
Getty Images