A London woman says she was recently shocked to find a dead frog in her bag of spinach greens, which she's purchased from grocery chain Tesco. 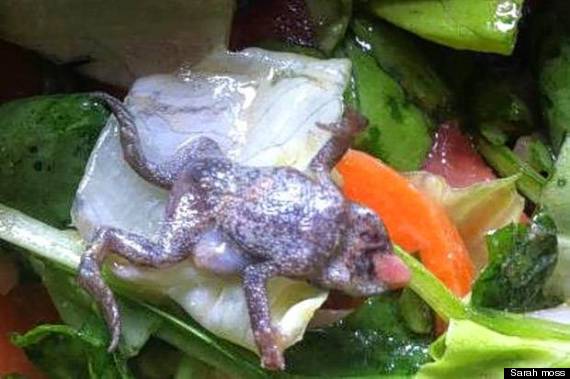 The Hackney Gazette reports that Sarah Moss made the discovery upon sitting down to a salad made with the greens, which were supposed to have been pre-washed:

“It must have been after five minutes that my fork went through something that wasn’t meant to be there, and pierced this poor little frog,” she said. “I don’t think it was alive, it had its tongue already hanging out.

Moss said the frog was perfectly intact, so it was unclear at what stage of packaging it managed to get inside the bag. Tesco initially did not offer any retribution because Moss did not produce the frog, but later offered a £10 gift voucher when Moss complained again.

The reports comes on the heels of a similar sighting last week by Londoner Olly Goldenberg, who also found a frog in his bag of Tesco spinach.

Goldenberg expressed his disgust to several news outlets, explaining that "This is not about money, there is something wrong here and this is below the standards you would expect.”

A spokeswoman for Tesco offered an apology and said the company is "urgently investigating how this happened with our supplier.”