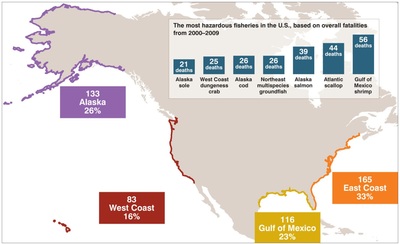 Commercial fishing remains the deadliest job in America, according to data released by the Department of Labor. New statistics about on-the-job deaths in 2011 show that fishermen continue to have a higher chance of dying while working compared with those in other occupations.

Fishing is inherently dangerous but it's still important to look at the several ways to make it safer. Inspections, the use of safety gear and training all make a difference. So can the way fishing regulations attempt to address overfishing.

Regulators often unintentionally create a race for the fish by setting short seasons, giving boats just a limited allocation of days to be on the water, or shutting down fishing altogether with emergency closures. Under those circumstances, sitting out bad weather or letting exhausted crews come ashore is harder to do.

Another way to address overfishing is through catch shares, which give fishermen a secure portion of the overall amount of a species that can be caught sustainably. Instead of fishing in a derby to catch the fish before the competition does and before boats are forced off the water, fishermen can time their trips to the best market and weather conditions. A peer-reviewed study in the journal Marine Policy found on average safety nearly tripled in fisheries in the U.S. and British Columbia that switched to catch shares.

Fisherman Jack Cox of Moorehead City, North Carolina said, "I was pressured to go out in a 28-foot boat in bad weather last week because I expect the grouper fishery to get shut down soon until May 1st." In January 2011 rough seas pummeled his boat, causing the deck to separate from the cabin. Luckily no one was hurt, but he was left with a repair bill of roughly $6,000. Cox says if he were in a catch share the crew would have remained on shore that stormy day.

As viewers can see watching Discovery's popular Deadliest Catch TV show, crabbing in the Bering Sea is a dangerous business. It used to be a lot worse. Prior to the introduction of catch shares, seasons were as short as a few days. Many crabbers perished in the intense race: eight in the last five years before catch shares. Since becoming a catch share in 2005, there was a tragic incident that claimed the life of one crabber.

Unfortunately there is no silver bullet to make fishing a safe job. But all options that can make it less dangerous should be on the table.