The deadlift is a very simple exercise that basically involves picking a barbell up off the ground and setting it back down. It's a bit more involved than that -- most everything is. And despite the fact that some fitness chains have decided to sell memberships by making fun of it, the deadlift is one of the most basic and useful strength exercises in the gym.

Nothing is more natural to the human body than the task of lifting something from the ground. After all, unless somebody else has already picked it up, that's where most stuff starts out, and we have to lift things every day whether we want to or not. Getting this basic movement strong a little at a time with a loaded barbell is just good preparation.

The deadlift is one of the basic barbell exercises because it trains the whole body. The term "kinetic chain" refers to the musculoskeletal components involved in an exercise between the base of support and the load being moved. In a deadlift, the base of support is your feet on the ground, the load is in your hands, and everything in between is doing its anatomically-predetermined share of the work. Your legs, hips, back, lats, arms and grip are all worked at the same time. Not much is missing from a deadlift. Here's why they are so important, and why you should be doing them. 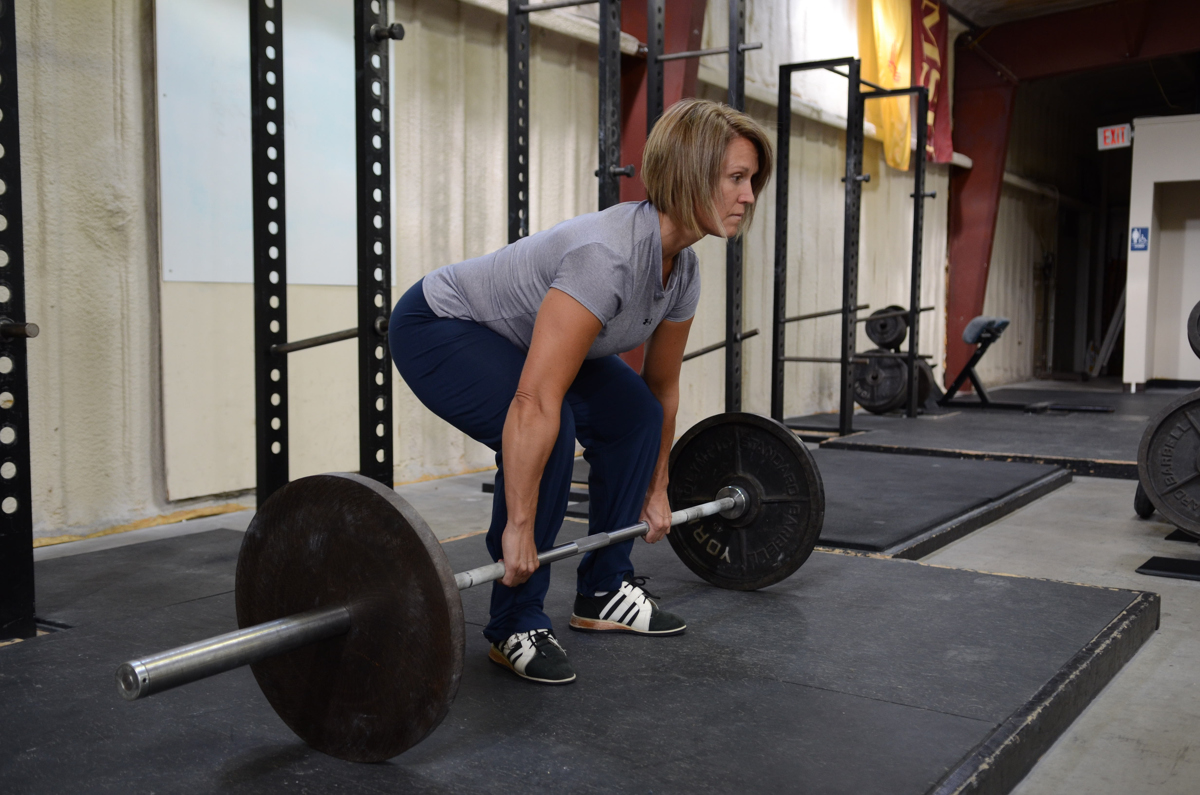 1. The deadlift has gotten the reputation as a dangerous movement, only used by hairy weightlifters who don't care about themselves. Nothing could be further from the truth. The barbell deadlift is safer than picking up a box of file paper, because the mass of the barbell can be placed directly over the body's center of balance -- the middle of the feet. This fact, and the ability of the lifter to keep the barbell centered over the mid-foot as it travels from the floor up to the lockout position standing erect, enables very heavy weights to be handled by a strong lifter. The current men's record in the deadlift is in excess of 1,000 pounds, and the women's record is over 600.

The ability to load the weight on a 1.25-inch bar (it fits nicely in the hands) centered directly over the natural balance point of the foot (so that the load exerts no net leverage on your balance during the pull) means that the deadlift is a mechanically efficient way to lift a weight. If only it were safe...

Aha! It is. The guy who pulled the 1,000 pounds is just fine. This is because the correct deadlift keeps the back in extension as well as the bar over the middle of the feet. An "extended" back is held in normal anatomical position by the back muscles working together with the abdominals and all the deep muscles between the pelvis and the ribcage -- the ones that are called "the core" by everybody but me. The job of these muscles is to stabilize the spine while moving the weight on the bar.

2. The hips and the legs -- more specifically, the muscles that extend the knees and the hips -- generate the force that overcomes the load, and the rigid back transmits that force up to the arms, then down to the hands and the bar. The fact that you can move the bar means that the muscles have overcome the weight, and when you do this while keeping your back "flat" throughout the pull, you have performed the best exercise for the back muscles in existence.

In other words, if the exercise requires the use of all these muscles to perform it correctly, then the exercise strengthens all these muscles as you lift progressively heavier weights. This is an extremely important point, because it is fashionable these days to advocate the use of lots of different special exercises for each of the little pieces of the kinetic chain of the movement. This ignores the simple fact that all the muscles used in an exercise are strengthened by doing that exercise as the load increases progressively.

For every part of the body, it is obviously better to strengthen a muscle in the role it is anatomically positioned to perform, along with all the other muscles around it doing their related jobs at the same time. Rather than isolate it with a small chrome dumbbell and then ask it to figure out how to fit in with its buddies later, train them all together, the way they function normally in human movement. Muscles don't need to be isolated -- they need to be worked with the team they are members of. And the synergy created between all these muscles working together may be the most important part of the exercise.

3. As a multi-joint barbell exercise, the deadlift has the distinct advantage of being able to gradually increase in load over a long period of time. Start with a light weight you can do perfectly and go up slowly from there. This is not possible with smaller muscle group exercises, which tend to stall in progress rather quickly and which therefore cannot make you stronger over the many years a deadlift can improve. It took quite a while for the 1,000-pound guy to get there. But he did it the same way you can get stronger -- a few pounds at a time.

An exercise that works many muscles at once spreads the work over the whole body, thus keeping the majority of the stress off of any one single joint or muscle -- while at the same time making the whole system strong because of the accumulating load. Every muscle and every joint that contributes to the most natural movement the body can perform receives precisely the right amount of its share of the work, if you do the deadlift correctly.

Find a coach and learn to deadlift. You may have no interest in pulling 1,000 pounds, but smart people know that stronger is better, and the deadlift is very good at making you stronger the right way.