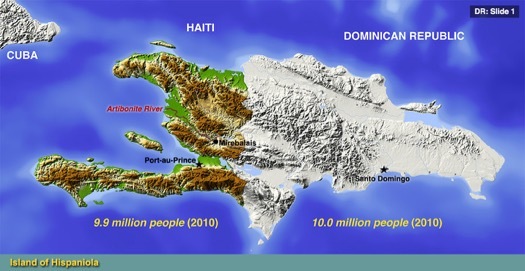 If you see something, say something. Don't get excited. I am not writing about your next- door neighbor operating a weapons and bomb-making warehouse. But I am anxious about one of Haiti's neighbors, the USA, which professes to be the island nation's best friend. I have been watching since the 2010 earthquake as the cholera time bomb explodes beyond containment in Haiti's largest river, the Artibonite. No one is saying much about the creeping loss of life while Haiti undergoes yet another exasperating round of election delays.

The trends are frightening. 19,949 cases and 170 deaths occurred countrywide in July 2015, as opposed to 7,739 cases and 56 deaths in July 2014. One must remember that these are cases that made it to reporting centers and hospitals. The total death number is 9310 persons as of May 4, 2016 and over 800,000 total cases. These are more deaths than any terrorist could possibly accomplish. We are a neighbor, we watch, and we say nothing.

In fact deaths from the cholera epidemic could be much higher than the official tally because of underreporting during the initial outbreak says a Doctors Without Borders study.

"Incomplete surveillance and data collection, overwhelmed health clinics, the rapid spread of the disease and cholera's ability to kill quickly contributed to what appears to have been a drastic understating of the death toll," reports the New York Times.

I want to tell you about an excellent book, Deadly River: The Cholera Cover-Up in Post Earthquake Haiti, but first we must review the political climate in Haiti from 2010 to now. Cholera did not take hold in a vacuum. It flourished in the darkness of deceit and lies; aided and abetted by governments, politicians and scientists with axes to grind and papers to write, and money to make.

Haiti is facing a critical time in its history in the midst of international meddling and posturing. E-mails from Hillary Clinton's private server through a Freedom of Information Request exposed how U.S. officials including Clinton's then Chief of Staff, Cheryl Mills, forced Haitian authorities to change the results of the first round presidential elections in late 2010. See the Center for Economic and Policy Research's excellent summary here.

Clinton's pick, President Michel Martelly, did not allow any elections to be held for four years. While all eyes were on the "election" chaos, cholera made its terrifying advance through the central waterways after The Nepalese United Nations Camp at Mirebalais dumped cholera infected waste in to the waterways.

Meanwhile, Martelly's political movement, PHTK, has formed an alliance with Guy Philippe, a drug running kingpin who is running for a seat in the Senate. Philippe led the paramilitary force that disrupted Haiti prior to the 2004 coup against former president Jean-Bertrand Aristide. Philippe remains a DEA most wanted fugitive.

Interim President Jocelerme Privert's 120-day mandate now remains in question, since Parliament abandoned its responsibility in mid-June and failed to convene. At issue was whether Privert should remain in office or be replaced with either Prime Minister Enex Jean-Charles or some other interim leader. Elections have been in limbo since February and the island nation remains under Privert's caretaker government. Another first round presidential vote is scheduled for October 9.

This is all background for the aforementioned book that conveys a true crime story of how cholera was allowed to spread in Haiti. In Deadly River, Professor Emeritus of Epidemiology at U.C.L.A., Ralph R. Frerichs, writes what amounts to a "who done it." This meticulously researched account of a scientist's classic gumshoe investigation of the epidemic lets no one off the hook, but leaves a few things out.

National and international health agencies, including the Centers For Disease Control, the World Health Organization, and the United Nations are all culpable in a massive cover-up that played out against the backdrop of a country in electoral chaos instigated by the U.S. Department of State. My only caveat with this book is that Frerichs gives Bill and Hillary Clinton a free pass; Bill Clinton, the Haiti Special Envoy, is mentioned three times in three sentences. Notably, Frerichs questions the accounts of OAS Ambassador Ricardo Seitenfus, who has been proven to be the ultimate insider on the coup attempt against President Rene Preval. 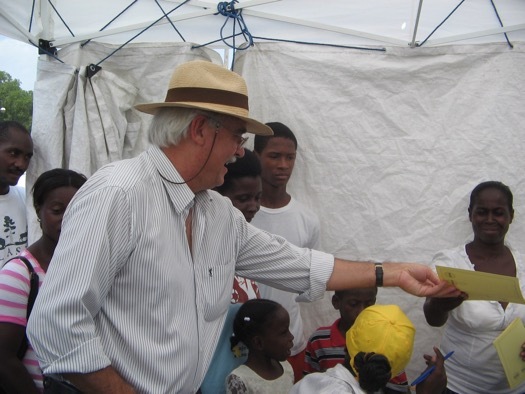 Still, if you want to learn how a health scandal of international proportions unfolded, take the time to read this heavily footnoted and riveting account. It is a long read, but worth the time. It took me weeks to digest it all. This is a book about epidemiological politics, but it should be read in context of Haiti's electoral morass.

Follow in the footsteps of French epidemiologist Renaud Piarroux, a friend of the author, as he searched for the culprit; in this case the method of transport of the contagion. Did it live naturally in the environment, or did infected humans import the disease?

Answering that question ultimately implicated the world community in collusion. Piarroux proves that, despite denials that remain to this day, it was indeed the UN peacekeepers from Nepal who introduced the microbe to Haiti's central river valleys.

Follow the timeline from the January 2010 earthquake; through the November 2010 elections and watch the cover-ups and denials unfold.

How high will the cholera death toll rise by October? How long will the impoverished suffer, while Haiti is still without a properly functioning government, courtesy of a former Secretary of State and a stolen election?