They don't call them banana spiders for nothing.

A British family was forced to flee their home in Hampton this week after finding Brazilian wandering spiders on bananas purchased at nearby Sainsbury's store. According to local reports, Consi Taylor was halfway through eating one of the fruits when she discovered the deadly spiders on the supermarket bananas.

The 29-year-old mother first noticed an unusual white blotch on her snack. Upon closer inspection, Taylor realized the spot was actually some sort of cocoon holding dozens of spiders.

"I had a closer look and was horrified to see they were spiders. They were hatching out on the table, scurrying around on my carpet," she told The Sun.

The Taylors enlisted a local pest control firm to identify the spiders. It was then that they learned the tiny creatures were Brazilian wandering spiders -- widely believed to be the deadliest type of spider in the world.

According to the Guinness Book of World Records, which lists the particular wandering spiders as the most venomous type of spider, a mere 0.006 mg of the arachnid's venom could kill a mouse. (Oddly, a certain toxin from the Brazilian wandering spider's venom has also been shown to help erectile dysfunction.) 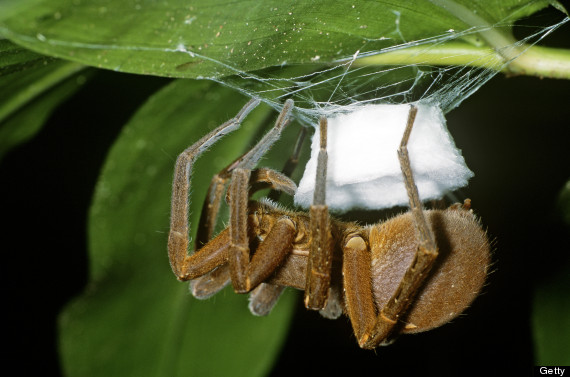 Brazilian wandering spiders are native to tropical climates in South America. They are commonly called banana spiders since they tend to live among banana trees and show up in banana shipments from time to time. In 2011, another arachnid, believed to be a Brazilian wandering spider, caused the evacuation of a grocery store in Germany after the creature was spotted under a shelf near a banana delivery.

A representative for Sainsbury's could not comment on the specifics of the cases, but said the incident is unusual for the supermarket chain.

"Customer safety is of paramount importance to us and we do have rigorous controls on imported products at all stages –- from harvesting to transportation –- which is why this is so rare," customer manager Gary Gartland told The Huffington Post in an email.

CORRECTION: An earlier version of this article called the spiders insects. Spiders are arachnids, not insects.