It was an unusual sight on Friday night at Judaism's most sacred site, the Western Wall. Near the blue-and-white Israeli flag, waving over the multitudes of Sabbath prayer-goers, a group of young adults were holding hands and dancing -- in complete silence.

The group consisted of young deaf Jewish adults, many from Russia who were visiting Israel for their first time thanks to a special trip led by Chabad Rabbi Yehoshua Soudakoff.

In a special interview with Tazpit News Agency, Rabbi Soudakoff and group participants explained through sign language, an interpreter, and typed-out responses, what their experience in Israel had entailed.

"It was beautiful," wrote Irina Normatov, 34, originally from Uzbekistan, who immigrated with her family to New York when she was nine. "I felt a powerful energy praying at the Kotel and other Jewish holy sites including the Tomb of Rachel -- like an electrifying energy going straight to my soul."

"It was good to communicate in Russian Sign Language with the group and learn some Israeli Sign Language as well," Normatov explained to Tazpit. She demonstrated the sign language for Kotel, mishpacha (family), and B'Ezrat Hashem (with G-d's help).

Rabbi Soudakoff believes that trips like this one are vital for the Jewish deaf population from Russia. "It brings us together as a family," he signed through the interpreter. "We are a community spread far and wide -- there are people here on this trip from the United States, Ukraine, and Russia."

"Here, we are not alone. We see that we have peers and a community behind us. And just as important, visiting Israel and seeing the sights have a powerful impact on our Jewish identity."

Rabbi Yehoshua Soudakoff, 22, grew up in Los Angeles and later attended a Chabad-Lubavitch rabbinical school in Crown Heights, Brooklyn, where he lives today. It is his first time leading a group of deaf people -- 13 participants and three staff members -- to Israel. The idea for the unique trip began this past summer.

"I was working on a summer camp project for Jewish deaf boys in Moscow," explains Rabbi Soudakoff. "In the process of searching for deaf children in Russia, I came across young adults who were too old for the summer camp but still wanted to be part of some kind of program."

Consequently, the Israel trip was born but not without plenty of challenges along the way and during the trip as well.

"We found out that we needed double the time for tours!" Rabbi Soudakoff exclaimed. "People that hear can just look around and listen to the tour guide speak. However, because we are deaf, we have to watch the tour guide and only after the interpreter translates into sign language, can we look around. That's just one example, but it slows things down."

The eight-day trip included visits and tours of Jerusalem, the Dead Sea, Tel Aviv, Masada, and Hebron. The group's Russian Sign Language interpreter, Bella, made aliyah to Israel from the Ukraine, 26 years ago. "I hope to see some marriages come out of this visit," she teased the group on their last day in Jerusalem.

The project was made possible thanks to Russia's Chief Rabbi Berel Lazar and Rabbi Mendy Wilansky and Rabbi Moshe Kotlarsky of the Chabad Global Jewish Youth Initiative, which provided the funding for the trip. 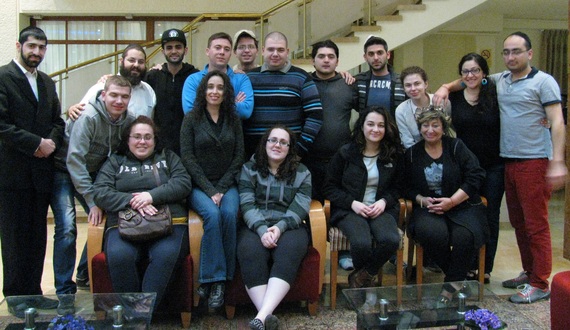