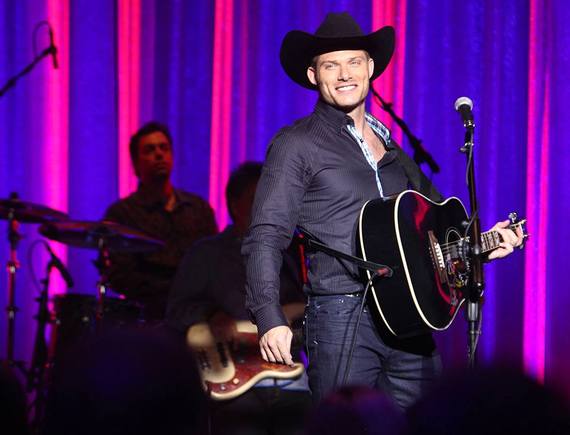 I'll never forget the year when "discreet" became a dirty word. It started when I fell in love with a boy who had to sneak out of his house to see me. I say "boy" not because we were teenagers breaking curfew. Shane* and I were grown men, consenting adults who had been seeing each other for several months. We had everything: chemistry, passion, heat. But only when we got behind closed doors.

Which brings me to the catch (and back to the sneaking around): Like Will Lexington (above), the rising country star Chris Carmack plays on the ABC TV series Nashville, Shane was in the closet, chronologically a man but a boy to the bone. Nobody aside from one or two close friends knew he was gay, and for the foreseeable future, he was intent on keeping it that way. So one night, when he was dying to see me after going out with his roommates and returning home, he had to make a tough choice, lest an awkward interrogation begin: Should he try to slip out unnoticed or just go to bed?

After reading his text detailing his dilemma, I suggested lying. He was already doing it to practically everyone in his life. Or why not just say he was off to see "a friend" -- or the Wizard of Oz? What was the big deal? Wasn't he free to come and go as he pleased? But I knew it was more about not arousing suspicion than about breaking a roommate code. He was spending a lot of nights away from home. They had to be wondering where he was waking up and with whom.

Eventually, love/lust got the best of him, and 15 minutes later he was knocking on my door. Although I didn't ask how he'd stolen away unseen, it bothered me that he'd had to. Secret love has given us some beautiful music over the decades, but they've almost always been sad songs.

I wasn't exactly sad with Shane, but our relationship was unlike any I'd been in before. I'd never been seriously involved with someone who wasn't at least out to all his friends. I was accustomed to going on dates and meeting the friends and usually the families of my boyfriends. With Shane, though, our love story unfolded mostly in the privacy of my own home.

He once said he had to learn how to be with me in public. That was a lesson he never mastered. I knew it wasn't all about what everyone else was thinking. To see Shane and me together wasn't to automatically know we were a couple, or even gay. He might as well have said, "It's not them; it's me -- and you." He was still coming to terms with his sexuality and having feelings for a man, a process I understood but didn't need to experience twice.

It's not that we didn't go anywhere, but when we did, like the time we went to KFC to gorge on comfort food in the middle of the afternoon, he was always visibly uncomfortable. So I avoided it, too. Who wants to sit across from someone who looks like he'd be more at ease in a dentist's chair with the sound of drilling ringing in his ears?

We went out together at night exactly twice. The first time, I was already at the pub, and I texted him to come and meet me. When he showed up, he was with his friend Jess, who, aside from the people he was out with the first night I laid eyes on him, was the only person in his life I would meet during our two years and four months of on and off and on again and off again. He met even fewer people in mine. Jess knew Shane was gay, but all it took was one sentence uttered by her while Shane was in the restroom -- "He has a lot of stuff to work through before he can be with anyone" -- to tell me she had no idea he and I were a couple.

I wondered if he'd brought her along because he didn't want to give anyone else that impression either. I felt like his dirty little secret and went home early because I needed a long shower to clean off the filth. I hadn't felt so grimy since my very brief fling with a man in Buenos Aires who lived with his fiancée a few blocks from me, a fact that he didn't reveal until after our first tryst. He'd made but one request before departing: absolute discretion. Cuando me ves en la calle, por favor, no me saludes. In other words, if you see me walkin' down the street, walk on by.

I don't believe in outing, and I don't think every gay person has to wear a rainbow banner or shout "I'm gay!" from a rooftop. It's the hiding and the lying that I object to, particularly in the absence of the threat of physical harm for being gay. To this day, I regret being that engaged man's accomplice in deceit. We all should be able to come out on our own schedule, but when someone else enters the equation (a boyfriend, a fiancée), it's no longer just about us. Those who've already come out have usually spent enough time cowering in the closet. Dating someone who's still in there can be like slipping back into that darkness.

I'm not the type of person to flaunt a romance or change my relationship status on Facebook. When it goes from complicated to over, it's too much like having a public break-up. I'll leave that to celebrities. Although Shane and I communicated by email and IM on Facebook all the time, our connection there was, like him, in the closet. It must be nice to have a boyfriend who occasionally comments on your status updates or at the very least "likes" them, but I wouldn't know what it's like to be "liked" publicly by someone who claims to love me privately.

What didn't happen on Facebook was the least of our problems, though. Relationships are more about what happens when you're face-to-face -- or they should be. No man is an island unto himself, and no couple should be either. Isn't part of the point of having a boyfriend having someone with whom you can share romantic dinners out, a travel partner, someone to kiss in the rain if the mood strikes you both?

Not that I'm the king of PDA. I've never even been much of a hand holder. Walking around with one arm intertwined with someone else's, male or female, has always seemed so unnatural to me. I am, however, a big hugger, and at the end of our third and final public meal -- as usual, lunch -- after Shane and I broke up the first time, he held out a hand as we were saying goodbye. I ignored it and embraced him instead. I think it may have been the first physical contact we ever had outside.

Today my biggest regret about the two-plus on-off years Shane and I spent in each other's orbit isn't that we broke up twice, the second time after he'd finally begun coming out to family and friends, to mostly non-reactions. And it's not that I put aside my common sense for as long as I did and let him treat me like a second-class boyfriend. Love makes us do crazy things, which is why I no longer judge people for staying in bad relationships. I can even muster up a smidgen of sympathy for women who fall for married men because I'd be a hypocrite if I couldn't.

I knew Shane and I had an expiration date, and for reasons that weren't entirely closet-related. My biggest regret isn't that I dated him anyway. I wouldn't have missed it for the world. What I regret most is that I have no memories of candlelit dinners in highly recommended restaurants, romantic road trips, or us dancing together on a Saturday night, making out under a strobe light. I still have no idea if Shane has rhythm. I don't have a single photo of us together. I'm not in any of the ones I have of him, and he never took any of me. I'm no fan of selfies, and we were rarely around other people who could take a picture of us together.

Some of my friends probably think I made Shane up, but really, I could have done so much better. If I ever decide to fabricate a boyfriend, or have another real one, I may skip posting photos of us together on Facebook, but there'll definitely be dining and dancing and kisses in the rain. I won't care who's watching, and as God is my witness, neither will he.

*Not his real name