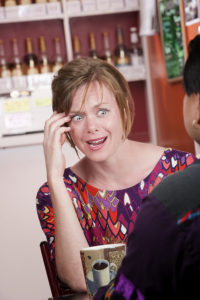 As a single woman dating over 50, what are your thoughts about deal breakers in the men you want to meet?

Just to be clear on what a deal breaker actually is....

Men also have deal breakers when it comes to dating you.

But, the difference between the sexes is men honor their deal breakers.

You'll see this when a man stays in a relationship with a woman for years and years, yet he won't marry her.

In his mind, she has a deal breaker that isn't suitable for marriage.

We as women have a tendency not to honor our deal breakers when it comes to men.

We think with a little work and a lot of love, we can change him and all will be well in our world.

Men don't change unless they want to change.

But you might say, I love him so much.

If this is the case, and he has one of your deal breakers, you aren't honoring yourself and you will be settling.

And so many women choose to settle... They're afraid no one out there is as good as this man - even if he has one of their deal breakers going on in his life.

This is an illusion. Your mind is playing tricks on you. All it does is take you to a place of scarcity when it comes to men.

The over 50's generation is leading the pack with the highest divorce rate these days which means there are an abundance of men out there for you to date so you don't have to settle.

Now, let's take a moment and talk about some common deal breakers worth thinking about.

Pets -- If you have a beloved pet in your life, then you'll want a man who'll treasure your "baby" like you do.

Children -- With adult children or minors, where will you fit in the family equation? And if there are minor children, are you willing to deal with the teenage years again, especially if your kids are now adults?

Smokers -- I once had a boyfriend who'd take himself outside in all kinds of weather for a smoke.

He'd stand outside my garage door and puff away, then he'd come in and wash his face before getting near me.

That was love to him. For me, it became a major DEAL BREAKER for future relationships.

Religion - Do you need a man in your life who can share your religious beliefs, going to church or temple with you on a regular basis?

Alcohol use -- Are members of Alcohol Anonymous okay for you to date? Or do you want someone you can share a glass of wine with at the end of the day?

Differences in sexual behavior -- Whether it's a full-blown Fifty Shades of Grey relationship you desire, or sex once a year on your birthday.

Money issues and differences -- Do you want him to pay for everything? Or can he be financially responsible for just his side?

Take some time to clear your head and really think about the specifics of your deal breakers and what each one really means to you.

I guarantee whatever deal breakers you skip over now... will become major conflicts in your relationship at a later date.

It's better to know what your deal breakers are and whether or not a man has them before you get too far into a new relationship.

While you're thinking about it, why don't you take a few moments and write your own deal breaker list.

As you get to know a man, refer back to this list to see if he has the qualities it takes to be with you.

And remember, if a healthy long-term relationship is what you really desire in your life, then you'll want to choose a man who doesn't have the deal breakers you've put on your list.

Lisa Copeland is known as the expert on over 50's dating. She's the best-selling author of The Winning Dating Formula For Women Over 50 and her mission is to help as many women around the world as she can discover how to have fun dating and finding their Mr. Right after 50. To get your FREE Report, "5 Little Known Secrets To Find A Quality Man," visit www.findaqualityman.com.

Dating Coach for Women Over 50