On May 7, 1999, during NATO's intervention in Yugoslavia, U.S. warplanes accidentally dropped laser-guided bombs on the Chinese embassy in Belgrade. The strike was meant to target a warehouse storing Yugoslav munitions, but the maps given to NATO were out-of-date. Three Chinese citizens were killed and twenty were wounded. Despite apologies from President Bill Clinton, the Chinese blamed America for deliberately bombing the embassy.

This account was compiled from a 2002 interview by ADST with Paul Blackburn, Public Affairs Officer in Beijing at the time of the bombing. You can read the entire account on ADST.org.

BLACKBURN: On the Saturday morning of the bombing, the embassy held an Emergency Action Committee meeting at the Embassy. The Regional Security Officer [RSO] told us there would be a demonstration in the afternoon. We were instructed to tell our American staffers and their families to stay in their apartments in the diplomatic compounds, exercise proper security precautions, and await further news of developments.

I rode my bike to a street corner by the embassy where I could watch - all the while trying to look like a harmless senior-citizen foreigner. The demonstrations were orchestrated by the Chinese authorities, who worked through the Communist Party cadres assigned to the universities. Two busloads from each of the major Beijing universities came, each with similar banners and slogans to chant, and each bearing a petition to be delivered to Embassy authorities.

At first the demonstrations were peaceful, and the embassy sent representatives to the gate to accept petitions. But the protests got more and more hostile as the afternoon progressed, and the marchers started throwing items such as glass bottles, stones, bricks, paint, and eventually Molotov cocktails.

As it turned out, I had left just ten minutes before the Embassy was completely shut down for the next three days. During the first day and a half of the crisis, many of our colleagues, were in significant danger. Officers engaged in a full-scale destruction of classified materials that might fall into the hands of demonstrators should the Embassy be overrun. In hindsight, it appears the danger was never that close, but several Chinese did jump the compound wall and had to be confronted by Marines in full battle gear before they were persuaded to jump back over the wall. Except for Shanghai, with its own Marine guard contingent, the other Consulates were protected only by Chinese security guards. In Chengdu those guards were of virtually no help.

Demonstrators climbed the compound wall, set fire to the Consul's residence, and smashed their way through the outer door of the Consulate. They were using a bike rack to try to crash into the interior - while screaming that they were going to exact vengeance - when city security forces finally arrived and routed them.

Happily, in the end no Americans anywhere in the country reported suffering any physical harm. One Australian and I think a Canadian - who to no avail protested that they were not Americans! - got roughed up, but only slightly. Canadian lapel buttons were in wide use by U.S. citizens during those days. Throughout the ordeal we maintained contact with the USIS Chinese employees, especially those with email.

The Fulbright professors were another major concern. I was convinced that, with campuses all over the country erupting with anger at the U.S., many of the Fulbrighters and their families would want to be evacuated as soon as possible. But none of them did request to go home. To their great credit, they all hunkered down for those first tense days in their campus apartments...

Throughout the crisis, we were able to maintain the embassy website. It was regularly under attack by hackers, but our contractors somehow managed to fend them off, or to quickly get it back up whenever it was taken down...We used the website in many ways besides just communicating with each other. For example, I wrote a statement for the Ambassador, expressing his regret about the mistaken bombing and calling for continued good relations between the two countries. We put that up in both English and Chinese.

The embassy's Gunnery Sergeant, an excellent photographer, took a widely used picture of the Ambassador looking forlornly out through the broken glass of the front door of the Chancery. Another he took showed our American flag through an upstairs broken glass window of the Chancery.

We put both these photos, and several others, on our website, and the news organizations picked them up from there. Chinese media handlers I talked with later told me they felt very resentful when they saw what we had done. They said we should have also carried pictures of the devastation and deaths at the Chinese embassy in Belgrade. I explained that that was not our job, but that we had carried numerous statements conveying our regret for the tragic mistake.

A few of us had gone in earlier to try to clean up some of the dirt and glass shards, but we couldn't fix the broken windows and there were limits to what we could do to make the premises presentable before the main body of the staff returned. It was pretty bad.

Everybody, especially the Chinese, was deeply disturbed by what they saw. Though we were not the primary target of the demonstrators, our compound was directly on the main route the demonstrators walked along. The USIS facility lost about 85 broken windows, while perhaps a ton of rocks and other debris had been thrown into our office space. Besides returning to depressingly messed up offices, the Chinese staffers were still suffering the effects of having had their families and friends urge them to get DSB to transfer them to new embassies and away from the contemptible Americans.

On the first day we were all back, I called the staff together and said, "Look. This is what happened, as best I understand it. Many Chinese think we bombed their Belgrade embassy on purpose. It was not done on purpose. It really was a mistake. We understand that Chinese media and party cadres put that unflattering interpretation on the accident, and that all Chinese feel very angry right now. The mistake was a terrible one, and we are deeply sorry it happened.

"At the same time, you should realize that Americans are insulted and upset with Chinese who accuse us of doing it on purpose because we feel some kind of hatred toward China and the Chinese people. As you can see, some Chinese felt justified in attacking Americans and causing all this damage to our facilities. We in USIS just have to deal with this tense bilateral atmosphere and get on with our work. After all, we are the Chinese and Americans who every day try to strengthen the basic fabric of relations between our two countries. That is our job, so let's get on with it. But first let's have some meals together and try to relax a bit." And that is what we did. 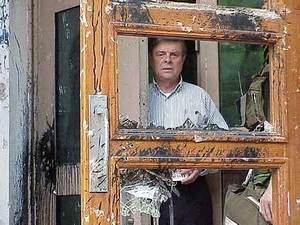 BLACKBURN: Sure, it was harmed, but in most respects it bounced back pretty quickly. In the days immediately following the bombing, the Chinese showed that they did not want the emotions of the moment to overwhelm the benefits China gains from the bilateral relationship. From the get-go they were anxious to protect economic relations and tourism. In fact, American tourists were going about their usual activities through the whole episode - and came up against no particular hostility, as far as I know. And the American business community was strongly encouraged by the Chinese authorities not to pull out either people or investment.

They also wanted to keep our educational ties going. Following the Tiananmen Square tragedy in June of 1989, we suspended the Fulbright program. People in both of our countries remembered that, and thought it had been a big mistake. When relations are sour, that is not the time to cancel educational exchange activities; you need them all the more. So both at the Ministry of Education and on the campuses, officials made a special effort to emphasize to the Fulbrighters and other foreign teachers, especially Americans, that their presence was very welcome. Military-to-military contacts stayed on ice for quite a while, but educational ties and media relations soon were much like they had been before the bombing.

After a couple of months, the overall climate of the relationship improved substantially. We sent a delegation to give senior Chinese officials an explanation of how the targeting mistake came to be made. Another delegation worked out what we would pay the Chinese for the loss of life, injuries, and property damage sustained in Belgrade - and the compensation we expected for the damage done to our facilities in Beijing and elsewhere in the country.

We finally agreed on a payment of about $30 million to them. And they agreed to give us about $3 million. 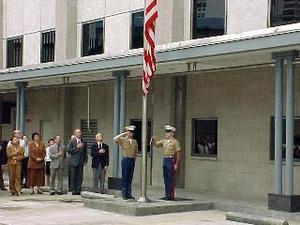 Q: Did we have a good explanation of what had happened?

BLACKBURN: We said that it was a faulty map, and using some charts and maps, explained to the Chinese leadership in some detail how things went wrong. Those charts and maps have never been made available to the American public! I felt, and still feel, that we did a very poor job of providing a satisfactory public explanation. The Chinese kept insisting that we had done it on purpose, and we had no hard documentation to use in rebutting them.

Unfortunately, bureaucratic butt-protecting kept us from admitting our mistakes - except through leaked information that appeared in the New York Times. That put new Ambassador Joseph Prueher and the rest of us in the very odd position of referring our Chinese interlocutors to a newspaper article, rather than giving them an official document - or, better yet, a White Paper - that laid it all out.

With nothing to bring the issue to closure, the bombing has entered the long list of humiliations China feels it has suffered at the hands of anti-Chinese foreigners over the last two centuries. I thought it was a great failure of our public diplomacy, but I was unable to do anything about it - either when there or after I got back to Washington.