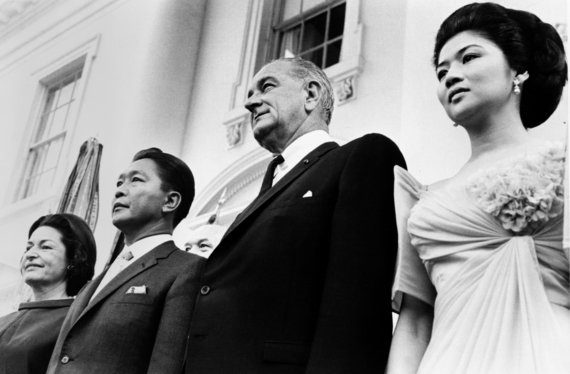 I write this with a serious understanding and thus acceptance that Filipinos don't grasp the power of these two words: Never. Again. I have also learned to accept that many Filipinos confuse (Catholic) Forgiveness with these wrought sisters, Denial and Powerlessness. That "history repeats itself" was invented and nurtured in the Philippines is beside the point, or perhaps totally moot at this historical impasse. There is very little room to move in this discourse. History is tight, and fast. Fact: the Marcoses have been back in office for years. Fact: Many are rallying to revise historical truths, creating heroes and fairytales out of the decades of the Marcos doom. Fact: Many of the new generation of Filipinos in the motherland or beyond don't understand a drop of the Martial Law concept, much less its corollary.

Given that we feed off of our tragic sentimentality and let it reign over common sense, there is perhaps a middle ground somewhere, a place where people who don't think, those who do, and then the many who don't really care can meet. But such a place really doesn't exist. The Philippines is a country of either/or: rain or shine, thick or thin. Come September 21st, another anniversary of Martial Law comes to sit with us for a whole day. More discourse, much hullabaloo over nothing and everything, more vitriol, only to move to the next topic the day after. Celebrity controversies have more lasting power in our diurnal conversations and memory than national topics of interests. No lessons learned. No real life applications if we ever learned anything.

Because of so many underrepresented voices, the latitude for solution-making in the Philippines is limited. The success of the political landscape of the Philippines is contigent upon how we can move the populace out of poverty and bring them to the educated middle class with power and decision making. The powerlessness of the poor people of the Philippines is the tragic root of all corruption in the country. Poor people are bought, sold, and damned. They are meaningless to the powerful few. Rich people are harvesting the greens of the so-called economic boom, while the poor remain poor, much to the joy of the powers-that-be like the Catholic establishment that lives off of them. We know this. We see this reenacted in Filipino movies all the time, except it is not fiction. The Marcos dictatorship, like any other dictatorship in the world, was all about using the poor as pawns. The bigger the poverty, the longer the party. 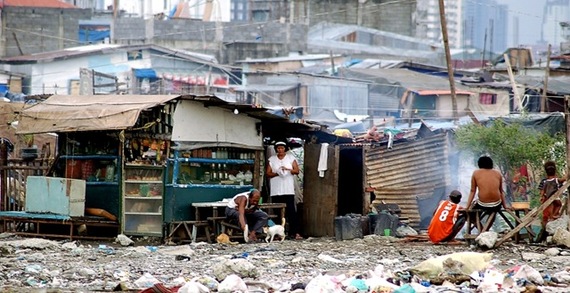 I was too young to understand Martial Law. But it was the only political climate I knew as a child. Marcos was the only Filipino president I lived under. My awakening and understanding of what happened in the Philippines didn't happen in Manila. The textbooks and news were sanitized even then. I remember curfews, but knew nothing of Martial Law-related human rights violations. I remember power outages, but didn't hear of lootings and corruption. My education began in another country, not in the U.S., but in Buenos Aires, Argentina. It was there, while studying La Guerra Sucia that I started seeing historical parallels. There was Jorge Rafael Videla, and there was Ferdinand Marcos, both great architects of repression. During the Dirty War in Argentina, tens of thousands of political dissidents -- los desaparecidos -- were kidnapped, tortured, and disposed of like meaningless objects. The dark spirits of Martial Law in the Philippines cast the same shadows. I have always been a lover of World History even as a kid. My love for books began in the readings of history books and encyclopedias. I joined and won history quiz bees in high school, my young mind having the capacity to memorize dates and facts, but with little understanding of why history happens. I didn't know that I was living in a climate of repression, because people like us lived too far from the inner circles of politics, as many Filipinos do even now. Luckily, my international education has allowed me to become more critical of the world around me, search for truth, and increase the capacity to understand the Whys and the Hows: Why did Martial Law happen? How did it impact the country? Why does the Philippines continue to be beleaguered by graft and corruption?

Granted that the Marcos years deserved to be relegated to the evil sections of history, what has really happened in the Philippines since? Have we had great leaders? Have we improved governance? Have we done better with the succeeding presidents of the country? Or have we bred more crooks, more thieves, and more corrupt government officials? From former president Joseph Estrada being found guilty of plunder and Gloria Macapagal Arroyo being arrested for corruption charges to the current administration of Benigno Aquino III's debacle due to massive theft of public funds, when will Filipinos tire of voting for one thief after another before they run out of ink?

The Marcos clan returned because they know they could. It's not Why did they, but Why would they not?