A few days ago, on the last day of 2014, I wrote a letter to Chiara Natasha, the 15-year-old Indonesian girl who lost her immediate family to the recent AirAsia tragedy. I'm not usually the type to try to contact people who don't know I exist, and when I do, I certainly don't do it so publicly. But reading about Chiara's plight struck me in a particularly profound way, as I feel a sense of affinity with her due to our similar backgrounds.

My sister and I were once, like her, schooled in Singapore while my parents were based in Indonesia. Jakarta, where they were, was but a 1.5-hour flight away, and for years we'd rely on planes to periodically shuttle either my parents to Singapore, or us to Jakarta. And when I later moved to Chicago for college, I would fly home for part of my summer breaks, and my whole family flew to Chicago for my graduation. Thoughts of aviation disasters frequently crossed my mind, but I'd chalk it up to too much Hollywood. It shattered me to learn that my worst nightmare had happened to a girl significantly younger than me. She immediately felt to me like a sister, even though we'd never met.

The letter quickly became one of my most widely-shared posts, and thanks to social media, the letter not only reached Chiara, but she also replied, in spite of my initially worries that I might come across like an intrusive busybody (I wonder how often such concerns hinder us from reaching out to someone in need?). Praise the Lord.

What happened next was also a surprise. I began receiving emails and Facebook messages from other people who read the letter and, moved by Chiara's situation, wanted to help in some way. Many, like me, have no specific ideas on how to help, but just want to be available as sisterly figures if needed. Others came forward with more concrete offers of assistance. For example, C mentions that a few friends working for the Ministry of Education would like to help Chiara explore the option of pursuing a government scholarship; R, who works for a multinational corporation, asked if he'd be able to ease the financial burden of continuing studies in Singapore, and is also actively looking for a volunteer professional psychologist should that be helpful; V is offering to sponsor a Bali vacation for Chiara and however many friends she might want to take if she took the offer. Just to name a few. (For anyone concerned about privacy and safety, be rest assured that I'm taking appropriate measures and am not trying to figure this out all by myself.)

I'm so honored to be able to witness such a beautiful outpouring of solidarity, and I had to share this with you. Isn't this a much more productive, not to mention compassionate reaction to a tragedy? Grief should never be reduced into a mere public spectacle. I partially blame mainstream media for encouraging such a response, and the following frontpage headline, of a widely-circulated Singaporean newspaper, is but one example: 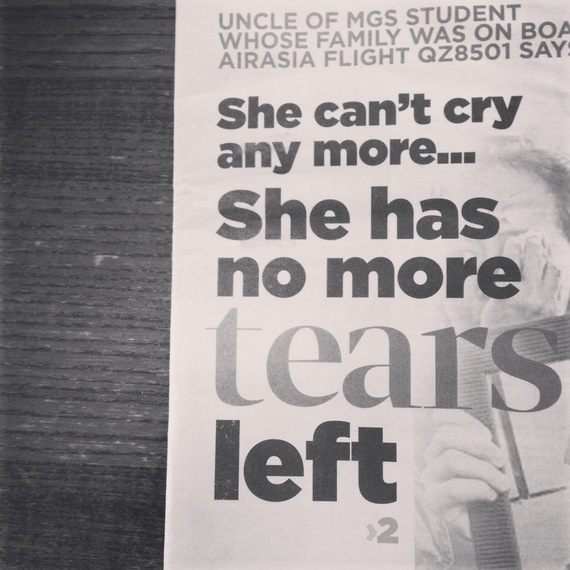 The above headline is an invitation to a pity party at best, an exploitation of others' tragedy at worst. I cropped out the blown-up photo of the grieving girl. Forgive me for my harshness on the media, but I feel very strongly about this.

Now, back to my original point. It seems to me that the people of these times aren't as "heartless" and desensitized as we often make it out to be. I'd like to think many of us are just forgetful. We have this innate, deep-seated desire to support and embrace those who are in need, but that desire often gets buried by the distractions of other pursuits and modern stimulations.

Blessed Mother Teresa, beloved Roman Catholic religious sister whose charitable works in Calcutta inspired the world, once said, "Stay where you are. Find your own Calcutta. Find the sick, the suffering and the lonely right there where you are -- in your own homes and in your own families, in your workplaces and in your schools. You can find Calcutta all over the world, if you have the eyes to see."

Amen. Amen. I pray this will not stop with Chiara and others affected by this disaster. Peace be with you, brothers and sisters. Let's find our Calcutta every day.