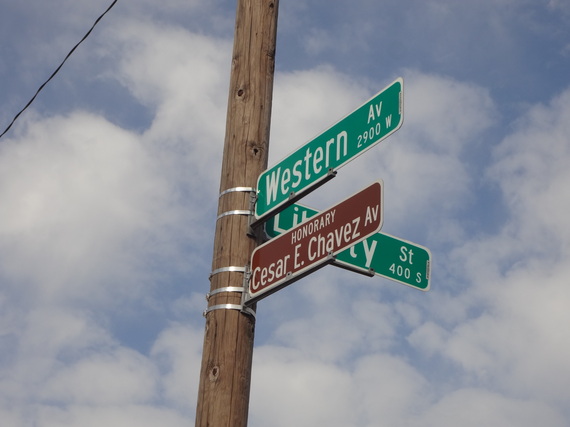 I don't know if it's because I'm on research leave this semester and I miss getting ready to go into the classroom, or because of the latest wave of an anti-Latino sentiment partly fueled by a certain presidential contender whom I shall not name, but I've been reflecting a lot about what it is that we can do to fight racism and xenophobia and move forward as a society. And I have come to a conclusion: only education can save us.

I have seen how education transforms lives semester after semester while teaching courses on U.S. Latino/a literature with a multidisciplinary and community-based learning approach. My Latino/a students oftentimes are amazed to learn about their own history and the diversity within the Latino/a community; my African-American students are usually shocked to learn about the struggles of Afro-Latino/as and come to realize the strong connections (oppression and solidarity) that bind African-Americans and Latino/as in the U.S.; and my majority (white, middle/upper class) students express how their eyes have been opened to realities they ignored. For the most part, regardless of their racial, ethnic, social, religious or cultural backgrounds, students usually express their deep disappointment at an educational system that did not expose them to a significant part of their own history. They see and feel that void.

The transformation begins when they begin to understand that "their own history" is much more than the whitewashed and sanitized version they usually get from K-12 history books, but also includes the contributions, struggles and accomplishments of multiple minority groups. The more they learn, the more they question: Why did I never learn about the Chicano Movement when studying the history of Civil Rights in this country? Why do they only teach us about Rev. Martin Luther King and not other important figures (including blacks) fighting for social justice and equality? Why was I taught that the U.S. gained much of its territory fairly as a result of the Mexican-American War? Why don't we learn enough about Puerto Rico if its people are U.S. citizens? Why don't they teach us about the U.S. involvement in Central America and our role in those civil wars? Why don't we learn about the history of Latino/as in this country, and how those migrations are usually the result of U.S. intervention (military, political, economic) in their countries of origin?

As a professor, it's sad to hear a senior student in college admit that it's the first time they have been exposed to knowledge that should have been an integral part of their education. Many, in fact, use the word "shame" to express how they feel, something that I immediately correct by reminding them that it's not their fault that they didn't learn about it earlier. They didn't have control of the curriculum. However, once in college, they have options and should take charge of their own education.

That is why I strongly believe that all college students should make it a priority to take one or more courses about racial and ethnic minorities in the U.S. If a student didn't have the chance to learn about these topics in high school, they still have the chance to make up for lost time while in college. Courses about Latino/as, African-Americans, Native Americans, Asian-Americans and other minorities, have the potential to effect social change. They work as catalysts to break down the barriers that divide us as a society -- stereotypes, misconceptions, fear and ignorance. For students who are minorities, it becomes a chance to learn about their own pasts and to see themselves reflected in the narrative of this nation, for non-minority students, it becomes an opportunity to break the whitewashing cycle that has invisibilized the accomplishments and contributions of non-whites in this country. Once aware of the facts, it's difficult to fall prey to the fear mongering that is gaining traction these days, and which a few days ago inspired a brutal attack on a Latino homeless victim. We all stand to gain something because we actually rely on our youth to build a more inclusive, tolerant, and peaceful society. Education is only the first step, but it's usually the most powerful.