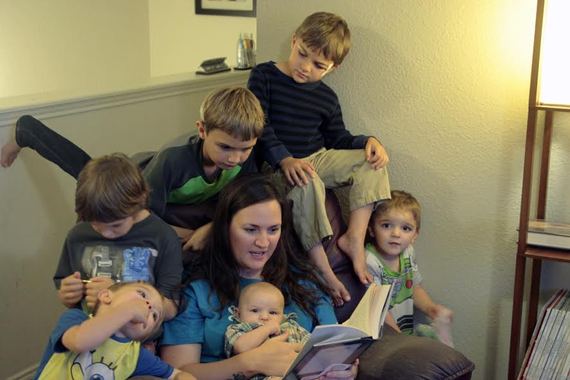 I have a large family. Six children. In a world where people are choosing to have fewer children (or none at all), this can seem weird and insane and, for some, unacceptable.

These people always come out to play when I mention anywhere in my article that six kids live in my house.

I get it. Six kids is a lot. Many people can't imagine having that many, let alone choosing to have that many. It seems like a crazy, why-would-anyone-want-to-do-THAT kind of thing.

Their concerns range from whether these kids are all from the same dad (yes!) all the way down to what my uterus looks like. So, since I don't plan to stop writing about my large family, I thought it would be fun to have a page of FAQs and FCs (Frequent Comments) where I could just send them to save time. Because I'm considerate like that and wouldn't want anyone to die wondering.

"You do know how they are conceived and (that) there are methods of preventing said conception, correct."
-I'm Real Original

Dear I'm Real Original: This is certainly the mystery of the century. And, to be honest, I really have no idea. You know how people joke about that woman whose husband just looks at her and she's pregnant? It's not a joke. It's me.

Please tell me how this happens. I really don't want any more of these...things...wrecking my home. So let's go get a cup of coffee and you can tell me the whole conception story. The more details, the better.

"I'd like to sit down with her and ask her exactly what she thinks she's giving society by having six kids. These people are so selfish it makes me sick."
-I Have No Kids

Dear I Have No Kids: Huh. That's weird. I didn't think I owed society anything.
(Also: My boys are awesome. I could care less what you think.)

"I think you have enough kids."
-The Child Police

Dear The Child Police: I'm glad you noticed. Thanks for not being afraid to tell me, because now I can finally stop. Because I truly do care what you think, even if I don't care what I Have No Kids thinks. You are the police, after all.

"I prefer a dog. I've always wondered why someone would bring another awful human into the world."
-I Hate Everyone

Dear I Hate Everyone: I want to be offended by your words, but I just feel sad. I wish I could find you and let you know how important you are to the world. My guess is you didn't have anyone to tell you that as a kid. Growing up in a world like that stinks. But not everyone is an awful human (I'm not. My husband's not. My boys aren't, either.). I hope you find some not-awful humans soon.

"Children can be taught to take care of their things. A quiet home may be impossible, but it can be a controlled noisy."
"Do some parenting and much of that nonsense will stop."
"Manners and chores are taught, not everyone who has boys has a torn up home."
- Perfect Parent

There you are Perfect Parent! I'm so glad you could come around. I know you're super busy raising your perfect kids. Can you do us all a favor and start a parenting class for the rest of us dopes? We could learn so much from you. Just tell us where to sign up and I'll try to make sure I can't find a pen anywhere.

"It just sounds like they run free, without any constraints. If something were to happen to the mother, who would want to care for them?"
-I Don't Get Humor

Dear I Don't Get Humor: Your name says it all. We're speaking a completely different language.

"Take a step back and figure out routines to control their acting out behaviors."
-I Know Everything

Dear I Know Everything: That sounds way too hard. I'd rather just let them run wild and terrorize the world while I lie on the couch and dream about my life before children.

"Why on earth do parents saddle their kids with ridiculous names?"
"What a bunch of bizarre names you've selected for your boys, lady."
-Names Are My Business

Dear Names Are My Business: I didn't realize I was in violation of the "Acceptable Names According to Society" list. Next opportunity I have, I'll march on down to the courthouse and change their names to something that might be easier for you to stomach.

Welp. Guess you'll have to get used to those ridiculously bizarre names.

"What were you drinking when you named them?"
-I Know Names

Dear I Know Names: That would be peppermint Schnapps, straight from the bottle. Because, you know, they allow that at the hospital during a woman's childbirth recovery. By the time the birth certificate official came around I couldn't feel my tongue anymore. You know what happens next.

Let that be a lesson, people. Don't drink while naming children.

Dear I Can't Count: I know, I know. Six is so close to 19. Scarily close. Turn around, and I might have more children than the Duggars tomorrow.

Truth be told, we're trying to be like another famous family. Just call us the Weasleys.

"What I learned from six boys: have a vasectomy."
"Should've had an abortion at some point."
-No Tact

Dear No Tact: What an educated, insightful answer. I'm so glad you could contribute something valuable to this discussion.

"Maybe booze has something to do with you guys getting pregnant so many times?"
-Stay Away From Alcohol

Dear Stay Away From Alcohol: I don't really remember. All I know is every day I had to buy a new bottle of red wine from the corner store because the old one just kept mysteriously disappearing.

"She should have told her husband to put that thing away after birth #3."
-Sexpert

Dear Sexpert: I did. Didn't work. Mostly because I look dang good in yoga pants and an unwashed-hair ponytail.

"She is discusting." (stet)
-The Educated One

Dear The Educated One: Sorry, I don't take insults from people who can't spell. Maybe that's snobbish. But I'm just being honest. Come back to visit once you learn how to spell the word "disgusting."

Dear I Share Opinions: We are the worst parents ever. Just ask any of our kids when they have immediate lights out for getting out of bed for the third time and someone's not dying (which constitutes an emergency). Just ask them when they get an extra chore for getting down from the table without being excused. Just ask them when they aren't allowed to watch the new Diary of a Wimpy Kid movie like all their friends do because the content is too mature.

"No wonder there's not a husband in the picture. She's ugly."
-Fugly and Fffffpppsmart

Dear Fugly and Fffffpppsmart: I know it's really hard to understand, but there is this thing that happens when someone takes a picture. It's called Standing Behind the Camera. You see, someone has to stand behind the camera in order for a picture to be taken (unless you set an auto-picture, which I have no idea how to do. Technology's not my strong point. Having babies is.). Husband was behind the camera.

Please don't let your brain explode with this amazing revelation.

"I know your hands are full, but you chose to have a large family, and it is time for you both to step up and be responsible. Do them a huge favor and try to have them become gentlemen. Make them pick up their own clothes instead of leaving them all over the floor. The world will thank you."
-Concerned Non-parent

Dear Concerned Non-parent: Well, this just dashes all my parent-hopes. I guess I thought my boys would leave their clothes on the floor forever, or at least until they found a wife to pick up after them. I definitely didn't plan on teaching them to find the hamper or clean up their own messes or do their own laundry. Mostly because I LOVE BEING A MAID.

(Said no mother ever.)

"Her uterus must be dragging the floor just like her vag."
-Crude Dude

Dear Crude Dude: Kind of you to be concerned. As far as I know, I haven't tripped over either yet, so I think I'm doing okay.

"Women like this keep popping out kids to try and remain relevant because they have no skills or talent. Get an education, lady...they will teach you how to keep ur legs closed."
-School Fixes Everything

Dear School Fixes Everything: I must be dumber than I thought. What does "ur" mean? I've never come across that word in my study of the English language.

Oh, wait. Study? I've never done that. It probably wouldn't surprise you to know that I did not graduate valedictorian of my high school class, and I didn't get a full ride to a university of my choice, and I most definitely didn't graduate four years later with a 4.0 GPA and a degree in print journalism and English. Because, you know, women like that don't have trouble keeping their legs closed. They know where babies come from, and they make sure they don't have six of them.

I'm sure it also wouldn't surprise you to know that I've never, ever, in all my life, won a writing award or been recognized for any of my work, because, of course, I have zero talents.

Now I feel sad that I didn't do more with my life. Guess I'll go open that new bottle of red wine and have another baby.

Thanks for commenting! If you have any personal issues with any of my answers, please email idontcare@babymakingfactory.com.

See you next time I write an article about my big family!

More:
parenting humorParenting parents-dadsChildrenParents
Newsletter Sign Up
Raise the kind of person you'd like to know
Subscribe to our parenting newsletter.
Successfully Subscribed!
Realness delivered to your inbox