This post was co-authored by Celinda Lake, President of Lake Research Partners 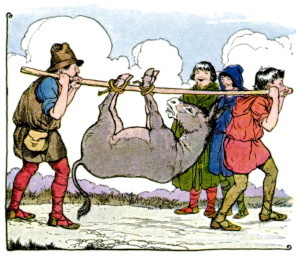 With mid-term election season in swing, it's time to play DC's favorite game: whack a poll -- or advice on what to say to get elected. Sadly, very few of these suggestions are ever new. Especially not in an industry where one big idea, shuffled endlessly, can generate an entire career. Provided that idea is convivial to the most affluent among us. The details vary but there's a signature and unchanging brand of advice handed to Democrats for the last 25 years: be milquetoast. From triangulation, to creation of the now defunct Democratic Leadership Committee, to railing against the incredibly effective "Bain attacks" on Mitt Romney, many have argued against populist progressivism.

The Wall Street Journal recently used a cursory view of electoral polling to recycle old canards as new insights for would-be Congress people. According to their read of the top lines in one poll, the winning phrase for the blue team is to "promote an agenda of economic growth that will benefit all Americans." This is the political equivalent of "free pie." Although we haven't sunk money into testing how many Americans dig this idea - we'll risk a guess to say it's a winner.

Democrats are to take head -- "growth" in any permutation is the winning word of the season. A candidate focused on "more economic growth" wins out big time over one pushing "less income inequality" just as "growing the economy" beats "increasing wages."

For those of us in the reality-based world, we've already seen enormous "economic growth" since the supposed end of the recession. While GDP has gone soaring, that has meant next to nothing for most Americans -- 33 percent of whom are now a paycheck away from the poverty line.

In other words, "economic growth for all" is a unicorn: lovely, mystical, and completely made up. And just as much as we may we rate unicorns highly, finding Americans favor the notion that everyone can have everything is the kind of careless punditry unworthy of the name research.

In truth, polls show how progressive policy priorities -- like raising the minimum wage, making college more affordable and fixing our infrastructure -- strike a winning chord pitted against typical conservative aims like cutting taxes on the wealthy. However, coverage of polls tends to leave out these details. Profiling only the talk about growth -- never mind unbridled gains go strictly to the already wealthy -- reinforces a deeply conservative worldview. Now, why would advisors who've gotten rich peddling these pearls of wisdom want that repeated?

Cherry picking in reporting polls is only part of the problem. The much bigger concern is that almost every poll has a deep methodological flaw: It lumps all respondents together. Thus, figuring out what the no tax pledging Tea Partier likes best has equal weight to the preference of the Blue Dog or the socialist. A staunch Republican isn't going to vote for a Democrat in November; thus, tailoring messages to what everyone wants is a mushy middle strategy bound to fail. And yet Democrats just keep trying it.

The objective in November for every party is turnout -- not persuasion. There are very few mid-term voters who don't already feel strongly about their party; no pithy phrase is going to make them change teams at the end of the season. Politics is tribal -- if you show up in the off-season you're here to root for the home team, not to assess the field.

Further, sophisticated analyses of voter turnout indicate that messages that rile up the base -- that get them passionate about a politician -- are required, no matter what side of the political aisle. Not a toothless appeal to the greatest number, no matter their political leanings. Republicans have long understood and employed this approach. Democrats need to catch up. This means that even if "economic growth for all" rated most highly with everyone asked, this still wouldn't necessarily make it the go-to message for engaging a partisan base.

In fact, it's deeply fitting that the animal in Aesop's "Please All, Please None" fable was a donkey. This kind of, let's meet people where they are and actually say nothing, approach is the best summation of current Democratic strategy.

Unlike Republican voters, where many potential Democratic voters are during mid-terms is at home watching television. We need to figure out where they're capable of going and what it takes to get and keep them there.

Our own recent research on economic issues tells us a progressive approach is in order. What voting skeptics need to hear is recognition that their vote would mean appreciable differences in the economic struggles most Americans are facing.

Messages like "every working parent should get paid enough to care for their kids" and "Americans deserve more than a decent living, they deserve a decent life" test through the roof with our base and persuade that hotly desired middle.

Best of all, they alienate the opposition who would love more government of, by and for the 1 percent. They map onto a potential divide in our politics in a way that competing versions of "free pie" do not and cannot. This is proof they are not only good messages; they're genuinely progressive.

Our research also affirms there's one finding other polls nail. Talking about an abstraction like "inequality" doesn't work for anyone. If growth is a unicorn, inequality is gravity. You can't see it but it is the force that determines what flies and what sinks. A winning message names what it's like for people struggling to make ends meet and what we plan to do about it. We must describe the man-made origins, effects and solutions to inequality -- not the concept itself.

Author - Don't Buy It: The Trouble with Talking Nonsense About the Economy