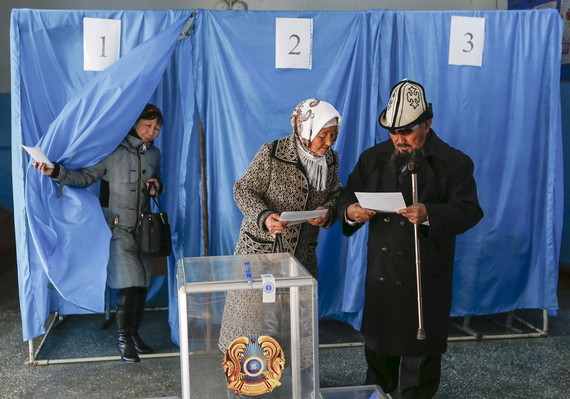 Throughout the 2016 campaign, Republican Party nominee Donald Trump has consistently claimed the U.S. election will be rigged. Trump has said he will accept the outcome of the vote on Nov. 8 if he wins. But he has not confirmed whether he will accept a Hillary Clinton victory as valid.

Experts agree that it is almost impossible to rig a U.S. election due to the complex, distributed electoral system and the sheer number of people involved in overseeing it.

But that's not the case everywhere. In many parts of the world, ballot boxes are routinely stuffed, opposition parties silenced and voters intimidated.

The Conversation asked scholars from countries where electoral fraud has happened, from Kazakhstan to Mexico, to explain what a rigged election really looks like.

Kazakhstan is a long way from the center of the global politics. It is largely known for British comedian Sacha Baron Cohen's Kazakhstani alter ego, Borat as well as the vast amounts of oil it produces, or perhaps its nuclear weapons withdrawal in the 1990s.

But there is a connection between the Republican nominee and the Central Asian oil state: the Financial Times has published an investigation into links between ex-officials of Kazakhstan and the building of Trump Tower.

Kazakhstan does hold elections: to local authorities, to the lower chamber, to the parliament and to the presidency. In theory, we are not an absolute kingdom or khanate. At least not yet.

But the elections that take place are often rigged. Elections are held not to provide the people with representatives but to create a façade of democracy for the West. The Organization for Security and Co-operation in Europe regularly observes elections in Kazakhstan, and its reports are damning. In their assessment of the 2015 presidential election, observers stated:

Serious procedural deficiencies and irregularities were observed throughout the voting, counting and tabulation processes, including indications of ballot box stuffing.

As a result, the ruling party, Nur Otan, won 81 percent of the parliamentary vote in 2016, and President Nursultan Nazarbayev won with 97.7 percent of the vote in the 2016 presidential election.

The current president doesn't participate in TV debates. The constitution, meanwhile, conveniently states that presidents can only serve two terms -- except the first president. Nazarbayev has been in power since 1989, and was elected the country's first president following Kazakh independence in 1991.

In addition to fraud on election day, parliaments are often dissolved or declare voluntary dissolution.

There is no doubt that the people of Kazakhstan have lost trust in the electoral system. But still we have hopes for honest elections in the future.

A self-fulfilling prophecy, Gabon's presidential election on 27 August 2016 resulted in chaos. After the proclamation of the victory of incumbent president Ali Bongo with 49.8 percent of the vote, over his rival, Jean Ping, who had 48.2 percent, the country descended into serious riots.

The National Assembly was partially burned, shops were looted, barricades were set up. Throughout the country, 1,000 people were arrested; the headquarters of Jean Ping were attacked by security forces and three people were killed in the capital, Libreville.

This violence was a reaction to the insurmountable paradox of the Gabonese state. It showed how fed up Gabonese people had become, having been confronted yet again by routine systemic fraud, which is understood locally as "electoral adjustment." This is at its worst in the region of Haut-Ogouué, Bongo's family's stronghold, where turn-out was a suspicious 99.9 percent.

The riots have highlighted the lack of transparency in the electoral process and the widespread hatred for Bongo.

In Malaysia, general elections have been rigged since the 1970s, through gerrymandering and malapportionment, to keep the ruling coalition, Barisan Nasional (BN), in power. This is mainly done by the Electoral Commission, the body established to conduct the elections. The BN has not lost an election since independence.

In the most recent general election, in 2013, the opposition won the popular vote with 52 percent vs. the BN's 47 percent. But under the first-past-the-post system, this mean the opposition only held 40 percent of the seats in the Malaysian parliament and the BN was returned to power.

Several academic studies confirmed what is widely known: without the gerrymandering, the opposition would have won government with a clear parliamentary, as well as popular, majority.

After the result, the opposition organised mass rallies around the country, hoping to build a "people power" movement to push out the government. In the first few weeks, thousands turned out for the rallies. But after three months, people were no longer interested in the rallies when it was clear the BN was unwilling to give up power.

Another significant factor was a lack of support from rural people. Most of the demonstrators were from the young, urban population. The biggest factor in voter apathy towards the rigged results was, simply, apathy and indifference. The BN's long history, more than half of century, of rigging elections was now considered commonplace. In other words, the governing party's cheating was considered "normal."

Looking ahead, it will take a new generation of Malaysians to demand a fairer electoral system. Whether this will happen remains uncertain given the political culture. The rise of political Islam has added a complication -- many Muslims who are disheartened by the present system are willing to consider an Islamic system to replace the current system.

Electoral fraud has not been a problem in Mexico for many years. But that was not always the case.

Mexico's 1988 presidential election is widely seen as fraudulent -- both in terms of how the then-hegemonic party, the Party of the Institutional Revolution (PRI) outspent its two main competitors and in how the votes were counted and the results reported.

Politicians from the PRI had won every senate, gubernatorial, and of course, presidential race since its founding in 1929, many of these with huge margins. But due to a severe economic crisis and painful economic restructuring in the decade of the 1980s, Mexican voters were angry at what they deemed a corrupt and inefficient system.

On the night of the 1988 elections, the district results began to flow in from district counting centres to the Federal Electoral Commission, then a non-autonomous federal agency whose head was the Minister of Governance, a position appointed by the president.

These first set of results did not favour the PRI's presidential candidate, Carlos Salinas de Gortari, so the Secretary of Governance apparently made a decision to halt the reception of the results and reported that the FEC's computer had gone down ("se cayó el sistema"), rendering it impossible to continue giving preliminary vote counts.

When the computer came back online several hours later, the PRI's candidate was declared the victor with a majority of votes (50.36 percent versus 31.12 percent for the candidate of the left coalition and 17.07 percent for the center-right opponent).