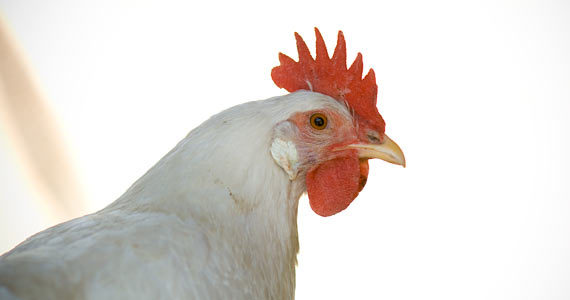 Back in 2008, voters in California passed Proposition 2, which required California egg companies to ban the use of cages for chickens. As a California-based food company, we're proud our home state has led the way in abolishing this inhumane practice. This is especially meaningful since California is the fifth largest egg producing state in the nation, with 19 million hens.

And with the upcoming implementation of AB 1437, the California law passed in 2010, all shell eggs sold in the state must also come from cage-free hens by January 1, 2015 -- whether California, Iowa, or Maryland hens. Yep, any egg-salad sandwich you eat in the Golden State must then come from hens raised in spaces where they can "turn around freely, lie down, stand up, and fully extend their limbs." In practical effect, that means the birds must be cage-free.

It's been almost six years since Proposition 2 passed and less than a year before its standards are implemented, yet most California egg producers have sat on their hands and have refused to come into compliance. Their nose-thumbing at California voters and a soon-to-be-implemented anti-cruelty law is shameful.

Here's what I have to say to egg-producers who want to keep battery cages in use -- get over it. Stop blocking what the public wants. Cage-free compliance is not only the right thing to do, but it's good for business, too. I know this firsthand. All of the millions of shell eggs served by the food service company I work for have been cage-free for almost a decade -- in California and the rest of the nation.

A little background: I first became aware of the issues around battery cages in 2005, thanks to a student at one of the universities where my employer, Bon Appétit Management Company, was providing the food service. The student simply asked us, "Why can't you use cage-free eggs?" At the time, we didn't know what he was talking about, but once we looked into his question, we were appalled at this standard industry practice. 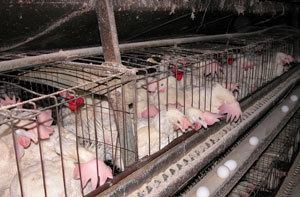 According to the Humane Society of the United States (HSUS), nearly all of our country's 280 million egg-laying hens are confined in battery cages (like the ones at right) where each has less space than a sheet of paper on which to spend her entire miserable life. Forget being able to engage in natural behaviors such as perching or dust bathing: they can't even spread their wings.

We learned that literally hundreds of thousands of hens are stacked per "farm" in these very tight conditions -- an untenably inhumane scenario. This practice also creates massive amounts of ammonia and manure, which can lead to poor air quality and potentially unsafe conditions for workers as well as pollution of surrounding land and waterways.

We knew we had to switch. But how? As a food service company, we use a lot of eggs.

We began working with the experts at the HSUS to create a trustworthy program. We decided that third-party certification was important. As a result, our shell egg suppliers must meet the high animal-welfare standards of one of three independent auditing organizations: Humane Farm Animal Care, Animal Welfare Approved, or Food Alliance. Cages are not permitted and the housing facilities must include areas for hens to nest, dust bathe, scratch, and perch. In 2012, we expanded this commitment to sourcing all our pre-cracked (liquid) eggs from cage-free sources by 2015. (Note: "Cage-free" is different from "free range." Cage-free means the hens are housed in large open areas inside barns; free-range means they had outdoor access.)

Yes, cage-free eggs cost a bit more. But the more companies that get on board, and the more producers that follow the demand, the less it costs. And let's not forget the upshot: These decisions are improving the existence of hundreds of thousands of laying hens in this country (not to mention those of workers and surrounding neighbors).

Our customers expect the animals they eat to lead decent lives that aren't filled with suffering, and so does the American public at large. In fact, survey after survey shows that U.S. consumers favor cage-free eggs. What it has cost our company in dollars and cents has easily been recouped by the overwhelmingly positive reception our customers have given these commitments.

In effect, doing the right thing and making the right decision for your business have become one when it comes to cage-free eggs. In the run-up to the January 2015 California deadline, every company, lobbyist, and lawmaker should get on board with cage-free compliance. Let's give consumers what they're asking for -- and move toward a more sustainable future for all of us in the process.