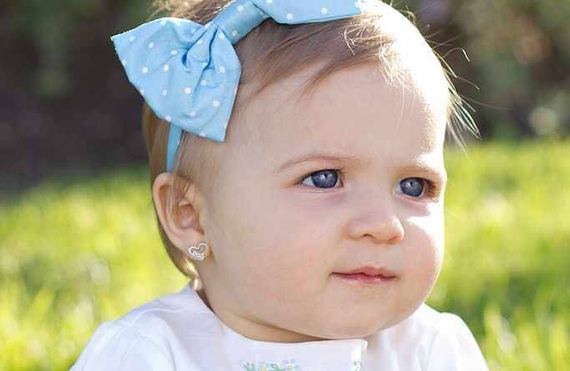 "Speaking of class differences..." began the distraught 60-something woman whom I'll call Elizabeth (in honor of the Queen). As she put down her glass of wine, she launched into a several-minute tirade about her daughter-in-law's decision to pierce the baby's ears. In her mind, it was not "right."

A Brit with perfect posture and a manner as proper as a ruling monarch, Elizabeth was aware that her daughter-in-law, a Latina, came from a culture where many babies had pierced ears. "But they're living in England," she insisted. "What about our culture?"

Elizabeth already had several heated conversations with her son and daughter-in-law. She argued that her granddaughter was too young for earrings. The procedure itself would be painful and risked infection. Besides, the child should have a say in the matter -- it was her body.

"All of my French and English friends agreed that it one shouldn't pierce such a young baby's ears and that it looks cheap," she also told them. At the very least, Elizabeth hoped her son and daughter-in-law would "compromise."

However, in this and many family situations when parents and grandparents clash, there is no middle ground. Similar discussions can happen with boy babies around circumcision and, later, about children's attire, education, diet, limits and myriad other differences. Younger parents rarely make the same choices as their own parents. In fact, some do just the opposite, and they are influenced by what each other brings to the table as well. If grandparents interfere, it can cause an irreparable rift. Here's what I told Elizabeth:

Back off. For all the "good arguments" she put forth, what Elizabeth really wants is to convince her son and daughter-in-law to not pierce their daughter's ears! She knows it; they know it. Trying to control an adult son or daughter -- or anyone, for that matter -- is a no-win situation.

Remember your "place." The great part about grandparenting is that you get to go home when you're tired. The hard part is that you don't have a say in how your grandchildren are raised, no matter how wise or "right" you think you are. You have no power. Better to accept that and move on. Get busy in your own life, doing thing you can control.

Think before you speak. Always ask yourself, "Is what I'm about to say going to improve the relationship with my adult children?" Parents are the gatekeepers to grandchildren. Bettering your relationship matters far more than "making sure they know how I feel." Some things should be left unsaid. If you're about to criticize or correct, keep reminding yourself, "This is none of my business!"

Don't cite other people's opinions. Elizabeth's "ammunition"-- friends' opinions that mirrored her own -- backfired. It only made her son and daughter-in-law angrier to think that she was talking about their private lives, and the generations became even more polarized.

Tell yourself the truth. When you object to another person's practice or choice, it's usually about you, not them. Elizabeth doesn't want her granddaughter to have pierced ears because she is worried about how people will see her. Rather than trying to change her adult children's mind, she needs to review her own past (what was her mother like as a grandmother?), as well as what's going on inside her now.

Apologize. Once words fly, they can never be recovered. Elizabeth can't undo the damage, but "I'm sorry" and "I realize that this decision is really not mine to make" would go a long way. And while she's at it, she could share with her son and daughter-in-law (as she did with me) that she thinks they're great parents. She might cringe when she sees hoops in her granddaughter's ears. But at least the little girl will still be part of her life.

Hi, it's Melinda. I welcome your comments and suggestions. Do you have a question about your family or a relationship? No topics are off limits, and it's all anonymous. Ask via Twitter @MelindaBlau #DearFamilyWhisperer, or click on this link And if you want to learn more about interacting with other significant others -- your extended family -- check out Family Whispering.