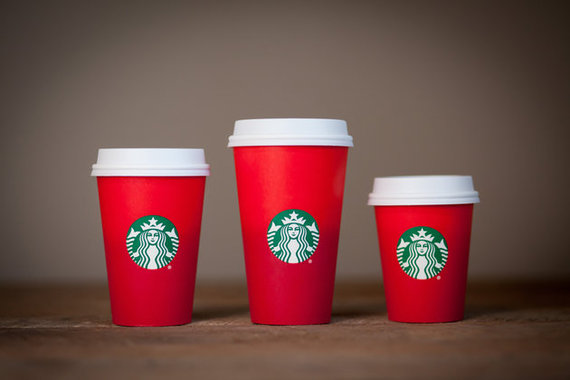 Good God Almighty (pun intended) people, what the hell has gotten into you?

You're offended with the Starbucks holiday cup because it doesn't say Christmas to you, so you have declared that Starbucks is "waging war" on Christians? I can hardly stand the idiocy of it all.

I am assuming that the Christmas ornaments, snowflakes and snowmen of previous Starbucks cups just screamed the celebration of Jesus' birth. No? Yeah, I didn't think so.

We are in trouble here.

At what point did we, as a society, start demanding that everything be done our way and conform to our beliefs? When did we become such whiners? And since when does a coffee cup escalate to a belief?

Who do you think you are to pass judgement on a corporation for choosing a color for their disposable coffee cups?

Don't we have plenty of real problems in this world that you should be focusing on?

Get upset over the homeless problem we have here in America, ISIS, beheadings, the random bombing of commercial aircrafts, racism, student loan debt, gun violence, wealthy idiots who pay thousands of dollars to kill endangered species, global warming, polluted oceans, a nuclear Iran, and the slaughter of countless marine life. And that's just for starters.

Instead, you have chosen to speak out about a red paper cup that is "assaulting Christian beliefs". Cry me a river!

It isn't Starbucks who is of ill faith, it's you. I'm quite confident that Jesus would not have had an issue ordering his holiday latte and receiving it in a red cup. And neither should you.

I hate to break it to you, but if you need a decorated coffee cup to celebrate your Christianity and substantiate your faith, then, my friends, you have far bigger problems than a little red cup.

Stop embarrassing yourselves (and me) and try very hard to remember that as Americans we hold dear the right to freedom of expression and opinion. Starbucks is not here to cater to your faith your way. Get over yourselves.

It is this writer's opinion that those of you drumming up hatred over a little red cup are anything but good Christians.

Maybe it's time you started drinking your coffee at home, you know, right before you go to church.

The reason for the season would be very ashamed of you.