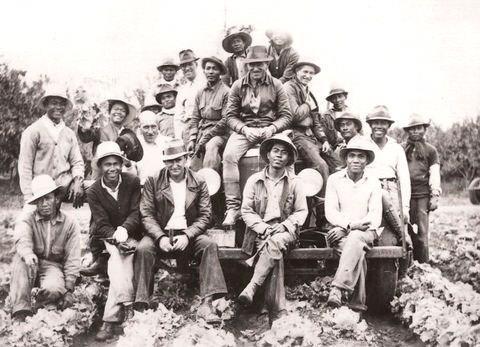 Coming to America in the 1920s was no vacation. Filipinos were "American nationals," the result of recent colonization, and ironically exempted from the exclusionary Immigration Act of 1924 that precluded the influx of immigrants from "Asiatic Barred Zones." Saved from the tyranny of Spain, young Filipinos like you were swallowed by an America famished for cheap labor. From Alaska and Hawaii to the West Coast, Filipino men became the bent backbones and the calloused hands of the sunburnt fields, paid a few dollars for long hours of work. And America was not in the heart, not yours, as it was the high tide of anti-miscegenation laws that made it criminal for Filipinos to marry white women. By 1965 when the United Farm Workers was founded, many of you had been in the fields for decades, organizing strikes and making your voices heard in the muted plains.

We immigrants mark our historical presence in America by the names of heroes who gave us a voice, an anodyne to invisibility in a country where documented history keeps some and discards others. It took me a long time to fully grasp Filipino-American history. Like you, I'm an immigrant who began my American voyage in silence. My political education had many twists and turns. In my 20s, I spent my Sundays teaching English to Chinese sweatshop workers in Brooklyn, my first exposure to the complex nexus of immigrant workers' rights and organizing. I would learn that self-empowerment was moot unless spoken in the language of the oppressor. The workers' inability to communicate exacerbated their plight. Word by word, my adult students learned the language of the negotiating table, slowly gaining power to address their oppressive working conditions. Workers' Rights as a Second Language: strategically similar to the organizing methodologies employed by farmworkers like you in the '40s and '50s.

I didn't know about you when I started organizing in the '90s. I had role models, but no Filipino-Americans. In the community organizing world, no one ever mentioned Filipinos next to the apotheosized Cesar Chavez. No Larry Itliong. No Philip Vera Cruz. None of these Filipino men and their Agricultural Worker Organizing Committee that spearheaded the very strike that catapulted Cesar Chavez into American memory and left you in the shadows.

In the words of Philip Vera Cruz:

On September 8, 1965, at the Filipino Hall at 1457 Glenwood St. in Delano, the Filipino members of AWOC held a mass meeting to discuss and decide whether to strike or to accept the reduced wages proposed by the growers. The decision was "to strike" and it became one of the most significant and famous decisions ever made in the entire history of the farmworker struggles in California. It was like an incendiary bomb, exploding out the strike message to the workers in the vineyards, telling them to have sit-ins in the labor camps, and set up picket lines at every grower's ranch... It was this strike that eventually made the UFW, the farmworkers movement, and Cesar Chavez famous worldwide.


Cesar Chavez has become a holiday, a stamp, a foundation, a national monument and a street and school in Delano. It is not surprising as the Latino community becomes a demographic force in the U.S. that 48 years later, a movie is being shown nationwide about the farmworkers movement, with Cesar Chavez at the romantic helm. Unfortunately, in the Hollywood version of historical dismissal, Filipino farmworkers are once again denied the proper recognition they deserve. In a recent appearance at UCLA, the director Diego Luna told a Chicano studies audience, "We have to send a message to the industry that our stories have to be represented. And with the depth and the complexity they deserve." 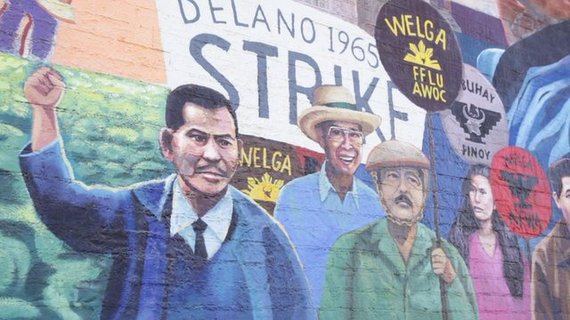 Indeed, in the age of American ethnic diversity, it is all about representation, all about visibility -- a spiritual mission to bring you, our fathers, back in the light. History might have worked in favor of Chavez in the past decades, but many Filipino Americans will do what it takes to put your names in the pages of American movements. A new documentary titled, Delano Manongs, interrogates the erasure of Filipinos from the farmworkers movement and presents the story from the point of view of the leader of the movement himself, Larry Itliong. In 2013, the New Haven Unified School District of Union City, CA renamed Alvarado Middle School Itliong-Vera Cruz Middle School. Even a new generation of Filipino Americans on the East coast, the Pilipino American Unity for Progress (Unipro), has made your invisibility part of their discourse.

Sí, se puede: the motto of the farmworkers movement, in Spanish -- a language many of you didn't speak, as if to say the movement was not spoken by your blood. But Cesar Chavez also said that "once social change begins, it cannot be reversed ... you cannot oppress the people who are not afraid anymore." Kaya Natin, we must say, We Can Do This. Kaya Natin: bring back your honor, bring back your light.