1. Your friend is not crazy. (She is adopting.)

There is, I will admit, a fine line between those two, but still, it's good to remember. The international adoption of a child requires enough paperwork to kill a small forest. And more governmental red tape than you can believe. Imagine your longest, most frustrating trip to the DMV. Now quadruple that, add in twelve more governmental agencies in two countries, and remember it's not a driver's license you're waiting for, but the final piece of paper that says this family you're creating can finally, finally be together. Yeah. Not crazy. But close.

It's possible. So possible. It's irrational and crazy but it's reality. Does she love them like she will once she gets to know them? No. But she loves them. She wakes up loving them and goes to sleep loving them. She drives to the grocery story and aches to have them safe and snug in the carseat waiting for them. She pushes her cart around the store and hears a child cry and her heart pounds, wondering if her child is crying? Alone? Hungry? She might even have to leave an entire grocery cart full of food in the yogurt aisle to go home and cry because it just is too hard. Way too hard.

3. It's difficult having your heart on the other side of the world.

To people on the outside, they don't look like our kids; on paper, they might not be our kids yet. But in our hearts, we love these children like they are and yet, we're not together. We're moms without children. It's an ache that doesn't go away. It starts before we see their faces and only ends when they're in our arms. So, we walk about with half our heart missing. It's hard to breathe, to think, to speak. Something always feels missing. Because they are.

4. She is addicted to her email.

It's OK. This is a temporary condition and most make a full recovery. It can be diagnosed by refusal to allow separation from her smartphone, or glassy-eyed concentration as she clicks "refresh" over and over and over on her computer. Other signs may include: waking up in the middle of the night to check because it's X time over there and muttering aloud, "must get home, must check for update, must get home," while out in public.

5. Her child has been through trauma.

If she's like a lot of moms, she won't be advertising that fact everywhere because she respects her child's privacy. But children don't come to the place of needing a second family because they were placed in a cabbage patch by unicorns and leprechauns. Adoption comes from loss. Loss she will see in her child's eyes and in their heart. Loss that as a mama, can make your soul curl up in a ball for an ugly cry. So, don't tell her the kids are lucky. You wouldn't tell a person who lost an arm that they're lucky to have a prosthetic one, would you? I mean yeah, they are lucky to have that replacement. But you know what would be luckier? Not losing that arm in the first place. So please, be understanding. Also, maybe instead of asking for her child's story outright ask "are you sharing about his history before you?" That gives her a chance to either answer you or bow out graciously.

It just isn't. Well, it is in that at the end of it the hope is to have a new son or daughter in your arms. But I've yet to meet a pregnant woman who wonders how old her child will be upon entry into the family. Adoption is different. There is no due date for us. Let that sink in. No due date. And even given preemies and late arrivals with the baby by stork method, you have a narrow months-long window of time in which the baby will arrive. That brings us to point number seven.

7. She probably doesn't know when the child is coming home.

And she has probably been asked this approximately twelve times that day. Because you, her awesome friends, care about her! (And also, you secretly worry she's going a little nuts, see point #1.) And I get it. It's hard with adoption because you don't know what to ask. I feel that way with pregnant ladies, like what am I supposed to say? "Your ankles really don't look that bad do they?" Recently, I learned the always safe phrase "you look great -- how is baby doing?", the adoption equivalent is "I know you must miss your kiddos, how is the adoption going?" Or, if you don't have time to have her break down and cry all over you try the even safer, "can I see your latest update pictures?" and then ooh and aww over their cute faces. Even if the pictures are horrible, say something positive. I mean I don't tell people that their sonogram pictures sometimes look like aliens made of bread dough. (Except yours, Amy B. Yours is the cutest thing I've ever seen.)

8. She isn't sure they're coming home.

This is the part of the adoption process that makes you want to crawl under your bed and not come out until it's safe again. This is the part that tears your soul in two. This is the part that you wake up in the morning remembering and going to bed at night fearing. Because there are no guarantees. And that's hard. No, not hard. It's gut-wrenching. It's not just the fear that your child might die before having a family, it's that this child you love with every ounce of your being might grow up in an orphanage, on the streets, or worse.

9. Your friend is kind of stupid.

I know. That's harsh. But it's true. You try operating on a daily basis with only half your heart and half your brain, because that's what it's like. 'Cause the other half of you is wrapped up in a tiny person who is half a world and what feels like a lifetime away. Also, because of the time zone difference it means that half of you is awake pretty much all the time.

10. She doesn't need to hear your HAS (horrible adoption stories.)

Yes, I know, everyone knows of someone's uncle's neighbor who adopted a child and then the child burned down the school with the power of her mind after her classmates dumped a bucket of pig blood on her. (Oh wait, that's the storyline of Carrie, isn't it?) But sharing these stories is the equivalent of telling someone hopping in a plane for their first sky-diving session, "I watched this video on YouTube where a guy skydived. He died. And his body was all smashed and stuff." Maybe it's true, but it's also not overly helpful. Unless you're the kind of person who also goes up to pregnant woman and says "I know of a lady who got pregnant one time, she gave birth to a kid who became a serial killer and sewed a suit of clothes out of his victims' skin." (Shoot, that's the storyline of Hannibal, isn't it? Well, I tried.)

Do "Adoptive Kids" sometimes grow up and do horrible thing? Yep. You know who else grows up and does horrible things? "Vaginal Kids." So really, the warning should be more along these lines: "You're going to be a parent huh? Good luck with that."

11. She has probably done her research

Don't assume she's going into this because of a driving urge to be mistaken for Angelina Jolie. Unless she is also demanding everyone call her husband "Brad," it probably comes from some deeper place. Or you know, her husband's name really IS Brad. Chances are she's read books on adoptive parenting, has agonized for hours over which adoption agency to choose from. Made a decision. Then agonized some more. She's thought about the ethical questions. And if you don't think she has, then maybe ask. "How did you pick your agency?" "What led you to X country?"

Which, I think is what mothering and loving is all about. Being a mess. Throwing your love out there and not knowing if you're ever going to get it back. It's scary. It's vulnerable. It feels like you can't breathe and when you can it hurts to do it. And you don't want to complain about that because you picked it. So, you pick up the pieces of your heart and you keep going. You keep going because at the end of the day what you go through as an adoptive mother is nothing compared to what children go through when they live their life without family. And that's what this journey is all about. 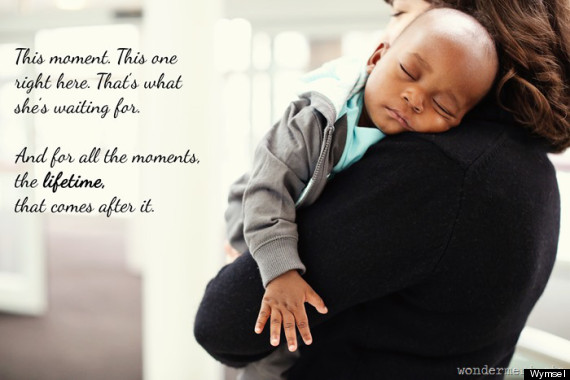 Photo of my son and I by Melanie Pace