The speed and ease with which you have coalesced around your new presumptive nominee is remarkable. After all, just last month, a third of you had a negative opinion of Donald Trump. Many more of you regarded him as a bad joke.

And let's not forget the blistering (and accurate) denunciations of Trump's character, integrity, and experience that rained down from nearly every corner of the GOP firmament. 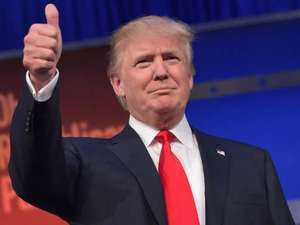 "An egomaniac with no principles," said Bobby Jindal. "A con man," said Marco Rubio. "A cancer on conservatism," said Rick Perry. "Utterly unfitted to the office" and "fundamentally dishonest," said 100 Republican foreign policy experts. The list goes on and on.

But now almost all of you are marching together in lock-step behind your new leader, with only an occasional tweet of dissent. The latest polls give Trump more than 80% of the GOP vote and rising.

What happened? Is Trump a different man? Have his qualifications expanded between the Iowa caucus and the Indiana primary? Has his temperament changed? Has he disavowed his prior appeals to racism, nativism, and sexism? Has he become more truthful, civil, or coherent? Has he become less of a bully or narcissist?

What should we make now of all those Republican statements branding Trump manifestly wrong for the highest office in the land? Never mind?

Please remember that the man you are putting forward as President of the United States -- the man you advise your fellow Americans to install in the Oval Office as Commander-in-Chief, with his finger on the button -- has no fixed principles, no relevant experience, no apparent interest in truth. He advocates policies that could only be implemented in a police state. He is zealous in peddling conspiracy theories, but disdains credible sources of information and expertise; one of his chief foreign policy advisors even listed "Model UN" as a credential.

This is not a normal candidate. These qualities do not fit anywhere on the normal spectrum of choices in the greatest democracy on Earth. And he should not, can not, must not ever be treated as normal.

I am not making any original observations here. Please, my GOP friends, read Robert Kagan and Adam Gopnick on the left. Hear from George Will and Erick Erickson on the right. Let Andrew Sullivan speak for the elite or let Matt Taibbi speak for the populists.

But, no, you probably won't. Too much cognitive dissonance. Too many uncomfortable truths. It's hard to look at the betrayal of one's nation full-on in the mirror. Better to cast a sideways glance. Or make excuses . . .

Excuse Number One. Trump is giving voice to real issues and legitimate grievances.

Yes, there are serious problems in America. But, there have always been serious problems. The test of a strong democracy is not how it hums along in periods of happiness and contentment; the test is how it endures in the face of challenges, and, until now, even in our darkest moments, we have passed the test every time.

And we did it without ever answering the siren song of the strongman who sweeps away everything in his path.

If you think Trump is voicing legitimate grievances, then, dammit, do something about those grievances. Don't elevate a dangerous demagogue to the highest office in the land.

Even if you assign the worst, most implausible interpretation to Hillary's past actions, none raise questions about her basic competence or capacity to serve. None suggest that she would embarrass our nation or threaten our Constitutional order. None hint that she would dismantle our alliances or compromise our core democratic values.

Maybe you don't like broccoli. Fine. But if your other option is rat poison, eat the broccoli. It's not a hard choice. (And to the Bernie-or-Bust crowd: this goes for you, too.)

Even a democracy as old and durable as ours can be more fragile than it seems. It is built, in the end, on faith and trust and belief. It depends on all of us, especially leaders, to put the interests of our institutions above everything else. It depends on us to be patriots. Think of Lincoln submitting himself to a free and fair election, even as the nation was riven by war. Or think of less noted, but perhaps nearly as important, moments of high patriotism - Al Gore conceding the election instead of urging his supporters into the streets, Nixon resigning instead of surrounding the White House with troops.

Do you imagine that Donald Trump would do the same in similar circumstances?

No. Donald Trump is something fundamentally different. He is the nightmare incarnate of our nation's founders. And to suggest that this singularly unqualified and dangerous man should be the leader of the free world is an act of pure contempt for the Presidency, for America, and for humanity.

Some people say Trump's nomination marks the end of Republican Party, but I don't think that's exactly right. The Republican Party will go on mimicking the routines and rituals of a great and proud political organization. It will go on holding conventions and running candidates. But, like a pod person from Invasion of the Body Snatchers, beneath the surface, the GOP will be a subversion of everything it claims to be.

It's not too late, my Republican friends. Party loyalty can be fervent, but it need not be blind. As John McCain once said: Country First.

But to the Republicans who are coming together quite nicely behind Trump - whether out of misguided conviction or craven expediency - you can go on being Republicans and calling yourselves Republicans.