Gay community, I am also your daughter. My moms raised me from birth. The only dad I had was a sperm donor who was anonymous. I was raised in a wonderful family. The only ignorance I have faced was from those who felt a father is necessary in raising a child. I have worked for years educating the gay and straight community alike that my family structure is just as good for raising children as any other, so I feel the need to respond to Heather Barwick, a daughter of gay moms, who believes her family structure (my family structure) was detrimental to her upbringing.

In her article on The Federalist, Heather explains that her mom left her dad when she was 3. Not only does she openly admit that her father "wasn't a great guy," but she says that he abandoned her after the divorce, and that her mother's new same-sex partner didn't fill the spot of her father.

I want to first say that her feelings about her father are legitimate. However, they are not relevant to the argument that she needed a father in her upbringing. As with many children of divorced parents, she didn't feel like the new replacement for her old parent was suitable. Regardless of gender, she wouldn't have felt like the new person dating her mother would have been what she needed. What she felt she needed wasn't a dad but her dad.

As for Heather's mother, I do agree that she made a mistake in failing to consider her daughter's feelings. But this has nothing to do with her sexual orientation. Heather was surrounded by negative man haters. She also had a mother who didn't make her feel like she could talk about her feelings. Had her mother been heterosexual and acted this way, it would have been equally detrimental to her child. The environment her mother put her in, the people and attitudes she exposed her to, and her failure to acknowledge her child's needs are likely the causes of her detriment.

At the age of 12, I joined a travel softball team. Having experienced hateful comments on a previous team, I asked my moms if it would be OK to keep the gay thing under wraps. Though they'd been out of the closet for nearly 20 years, they were full-heartedly supportive and gave me my time to "come out of the closet." They admitted years later that they were secretly hurt by my wanting to hide them, but they knew that they had been given time to come out, so I should be given the same courtesy. They listened to their daughter's insecurity about having gay parents and supported me. It wasn't long until I got some self-confidence and stopped being upset by negative comments. I just needed some time and understanding parents.

When Heather's mother and new same-sex partner made her feel like her feelings were wrong and she didn't have a voice, it was not poor gay parenting. It was poor parenting, period.

Parents, gay and straight alike, parent poorly sometimes. Kids who come from heterosexual parents may have parents who, they feel, don't listen to them. They may even have parents who are abusive. Heather had an experience with a messy divorce, a dad who left her, and less-than-adequate parenting that happened to be done by two women. She's now seeing a great parent in her husband and assuming that his great parenting can only be done by a male.

Heather, you may be looking at your lovely family and think that your husband is an amazing father, and I'm sure he is. This doesn't mean that you can discount my family structure because of the lack of structure you were raised in. There are plenty of dysfunctional families led by a mother and a father, and there are plenty of wonderful families led by single parents, grandparents, same-sex parents, etc.

I have no hole to fill. I am lucky to have two wonderful parents who love me. I don't "desperately need a daddy," because mine didn't leave me. My parents support me and have surrounded me with a great community of LGBT and heterosexual people who are positive role models. There were no man haters in my community. My parents listen to my concerns and do their very best to help me. I have two loving parents who taught me about the ignorant people who will hold up those "Gods Hates Fags" signs and didn't let me worry about it, because I was taught that those people were closed-minded, ignorant, full of hate, and in no way worth my tears. I was encouraged to be patient and educate, but not to be bothered by them. I have two parents who raised my two brothers and me as independent thinkers who have their own voices.

So please, Heather, in regard to your less-than-adequate upbringing, don't play the "gay card." Your parents may not have supported you, but do not put the blame on my family's, or any other LGBT family's, structure. Your family being dysfunctional had nothing to do with your mother being gay. It had everything to do with having a father, a mother and a stepmother who all failed you as parents in some way or another.

You are right in that there are hard topics that need to be talked about. Divorce is a hard topic. A parent leaving you is a hard topic. Being surrounded by negative role models is a hard topic. As a young girl, you were abandoned and raised in a negative, man-hating environment where you felt you couldn't speak, but this does not give you the right to strike out at the gay community as a whole.

Talk about how your parents didn't parent correctly to whatever excess you please, but do not make a blanket statement about gay parenting simply because your family is dysfunctional and an abandoned little girl inside you is hurt. 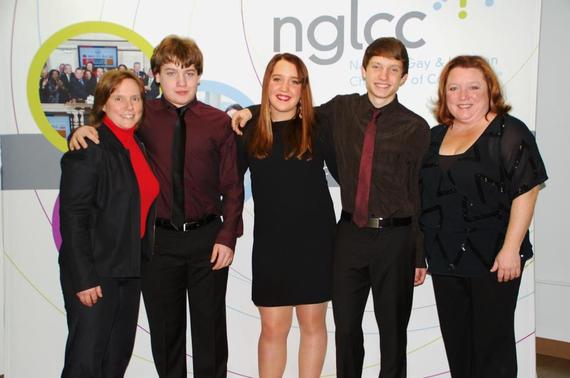