I know you've heard that before ... but I'm not talking about your recent trouncings on the Daily Show and Last Week Tonight for a few misplaced emails. Nor am I talking about SNL constantly reminding the electorate your people skills are roughly three and half notches above artificial intelligence.

No. I could care less about all that nonsense.

What I'm talking about is the only word dirtier than politics in America: marketing.

It'd be easy to say that the presidential race is a marketing challenge like no other. But it's not. Your team faces the same realities as any product: relentless competition, brand trust and loyalty, engagement, overcoming objections, and ultimately conversions.

While your final "conversion" is a vote and not a sale, the path is remarkably similar. And just to prove this is coming from a place of love, let me start with the good news.

What Team Clinton is Doing Right

There's plenty of good on that front. Most of your emails have compelling subject lines, concise copy, and clear CTAs. Just please, learn my name. You're killing me with "Friend."

Copywriter Aaron Orendorff gathered non-partisan advice from some of the best CRO (conversion rate optimization) experts in the business to critique the Clinton and Trump's sites and offer advice on how to improve conversion rates, which includes both signups and donations. While most of your CRO comments are positive, there is always room for improvement. Read it here: Presidential Teardown: 18 CRO Experts Weigh in on the Most Pivotal Funnels in World History.

As Aaron put it:

"No matter what side of the political aisle you're on, these could very well be the highest stakes online funnels in the history of the world."

It was Aaron's blog post that inspired me to write what I've been thinking for months. He even managed to score input from Kyle Rush, the head of Hillary's CTO team, about what they're doing.

While your overall engagement is low, some of your tweets hit it right out of the park. Here are a few of my favorites:

"It's pretty obvious he doesn't know a lot about the issues." —@SenateMajLdr on Trump

“I never thought I’d say these words, but Ted Cruz was right...in this election, do the right thing and vote your conscience.” —Hillary

What Team Clinton Needs to Fix

Trump rules twitter, and by doing so, rules the blogosphere and the media. His followers eat up his verbal diarrhea. His feed is a constant stream of insults, lies, racism, fact-free memes, and random threats. His followers eat it up; his detractors are horrified and disgusted, and both sides write about it constantly. Everybody is tuning in for the show, and the points he scores often resonate with Bernie Sanders supporters. On purpose.

Your tweets? Who knows? Most are too boring to make news. I understand why, I really do. You're running on dignity, experience, intelligence, integrity. That's why you need the downticket flooding the twittersphere for you. Recruit more fiery senators like Elizabeth Warren to duke it out while you maintain your brand.

What you're really lacking is engagement. Social media is not one-way. If you went on Twitter for even a few minutes here and there throughout the day and answered positive tweets from random people with personality and humor, bloggers and social media would eat it up. Put an intern on finding great tweets to personally answer while you're in the car or do what everybody else does and take your phone to the bathroom.

I've only discussed Twitter as an example - a good social media team could and should take on all of the big platforms.

Want to know what we're afraid of? SCOTUS. One presidency lasts 4-8 years; we can probably recover from Trump. Theoretically, if he wins, Dems (those of us who haven't moved to Canada ) will be horrified enough to turn up at the midterm elections and regain congress to rein him in. But a far-right SCOTUS is a 40-year scourge, and making it so is literally a plank in the RNC platform. They are hell-bent on turning SCOTUS into a shrine for Scalia's antiquated ideas about women, guns, and religious rule, and they aren't shy about their intentions. Ruth Bader-Ginsberg can't live forever. Much as we'd like to see that happen.

Monitoring social media channels will tell you what we're discussing. Active participation in pro-Hillary groups will give you direct access to what's on your supporters' minds. You'll get feedback, opinions, advice, questions...and it will give you a chance to clear up negative press with factual replies.

Stolen emails reveal that you're contacting big-name journalists to feed them stories (as you should be, why is that even a thing?). But the 24-hour news cycle, market over-saturation, and the Fox-New-inspired tabloid format leaves your core audience of intelligent liberals cold and suspicious. The real goldmine today is in influencer marketing. Personal endorsements from real people.

Take this post, by Allen Clifton: Let Me Address This Ridiculousness Surrounding the DNC Email Hack 'Controversy'. Common sense reasoning, and calm discussion of what (little) was really revealed, sans hysteria. While rightwing heads explode and Trump blows chunks on twitter, where's the counter-measure? Who on your team is talking about what Sanders was doing to spark this kind of discussion? How he was, at the time trashing the DNC in the media, and insinuating that the presumptive nominee (according to the numbers, it was already over) is corrupt.

It's no accident that this fake controversy hit the web two days before the DNC. Assange is a well-known Hillary hater...and it's looking more and more like the Russian government is behind the breach.

The Democrats are doing a bad job of controlling the message. You're not doing nearly enough to counter the astonishing avalanche of BS. Once again, engagement will encourage bloggers and other influencers who support you. Reach out. Make friends with believers.

Social media is wallpapered with fact-challenged memes about everything from Walmart to the TPP. Surely your graphics department can make some fact-based memes for social media. 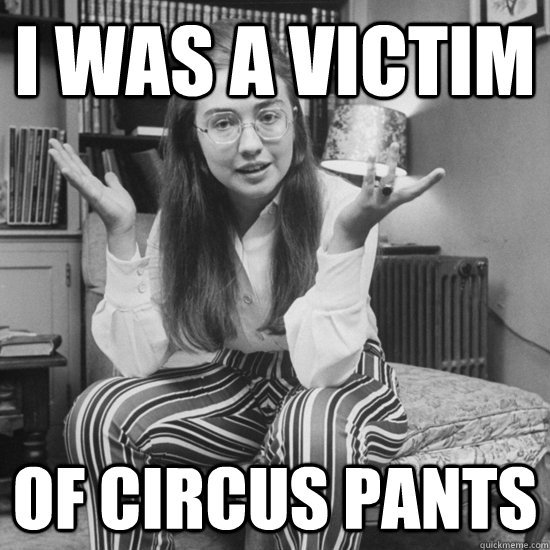 I don't care who you are, this is funny.

Let's pull it together. In reality, Bernie and Hillary supporters want the same thing. We simply have a different approach. We need a positive approach and a progressive agenda.

What people don't seem to understand about you, Hillary, is that you have always worked for us, and that's what a politician is supposed to do. Your advocacy largely mirrors public opinion. Somehow, Bernie supporters have turned your loyalty to the American people into a negative. Between starry-eyed Bernie supporters, the echo chamber of the right and the salacious media reporting of rumor and opinion as fact - profits over truth - your image has soured with all but hardline dems.

Those of us look past the bullshit to your long record of service need to be loud and proud. And that's the bottom line, you need to arouse the passion of your base. The speakers at the DNC are perfectly chosen to do just that, but after the convention ends, we need to flood the web with the positive. I'm normally a business blogger, but I am ready to raise my voice. Let me be clear. I have no reservations and no reluctance. I'm not settling or voting the least of two evils.

In a gigantic field of candidates, Hillary Clinton was always the best choice.

And quite simply, we can't afford to lose.