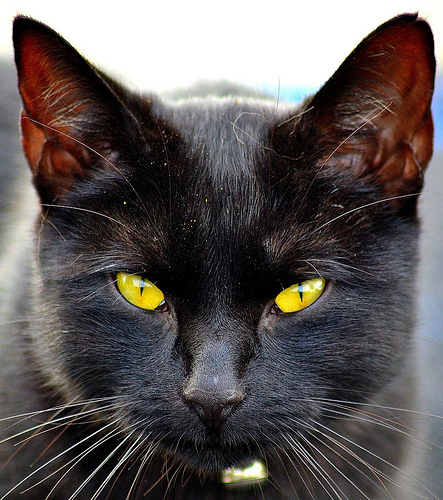 Normally I wouldn't care about the dog as he is rather simple of mind but he is exhibiting some behaviors that lead me to believe he is insane. Due to his superior size and strength, we must take measures to protect ourselves from said insane canine.

As a cat, I can assure you that I have studied the dog's behavior for many hours, many days and many weeks always hoping to discover a redemption story. But alas, it never happens. The dog is crazy and there is no cure for his mental frailties. None. At. All.

He needs to be medicated so he doesn't hurt himself, or us. The sooner the better. Like, now.

In case you haven't been attentive as of late, the smelly drooler has taken leave of his senses and actually believes that rolling in skunk spray will cover his tracks and protect him from predators. How hilarious is that? Who would want to eat the ugly butt-sniffer? He's disgusting with or without the aroma of skunk.

Furthermore, he has an attention span of a gnat if there is no food or possibility of getting food in the immediate vicinity. What's with that? Well, here's my guess. It's a sad attempt to self-medicate because his body image is not what he wants it to be. Let's face it. Time hasn't been kind to his waistline.

So please just take care of this as I have naps to take and more naps to take. I don't have time for this crazy dog stuff. Just get rid of him or get him the meds he needs. Please. So I can go back to my naps and happy dreams. Yep. Just do it.