I will answer you, Ms. Cheney. Here are my credentials: I am a college theater professor with an interest in drag. Last semester, I taught a course titled "From Shakespeare to RuPaul: The History of Drag Performance." My students and I studied the long and varied history of the art form and explored such issues as gender variance, gender construction, cultural norms and artistic expression. We spent time questioning whether drag is akin to blackface.

From my perspective, here are reasons why drag is socially acceptable when blackface is not:

Drag is a celebration. Drag is an attitude. Today's drag queen is often a gay man who has embraced that part of himself that, as a child, was considered shameful and undeserving. Rather than allowing himself to be bullied, he has revealed that hidden aspect of himself, dressed her up, made her fabulous and invincible. He has found strength in her and wears her like a shield. Drag is some of the best parts of who he is, magnified and impervious.

A blackface performer is dressing up the ugliest parts of himself: the racist, belittling, superior parts of himself. This ugliness is worn on his face for the amusement of others like him.

Men dressing in female garb have been integral to the performing arts for thousands of years in a myriad of cultures. Medea was originally played by a man in ancient Greece. All of Shakespeare's greatest female protagonists -- Juliet, Lady Macbeth, Rosalind, Beatrice and so on -- all were created by male actors. The Japanese Onnagata is a beautiful idealization of womanhood. The Tan (or Dan) actors of the Beijing Opera, such as the great Mei Lan-fang, are skilled, graceful performers unlike any other. The English Panto Dame has entertained families at Christmastime since her introduction in the 19th century.

In contrast, blackface performers were popular for a relatively short time (perhaps a hundred years) in American minstrel shows. The overt racism of the entertainment became increasingly problematic as America grew.

The contemporary drag queen is a lip-sync artist. When she moves her lips to Gloria Gaynor's I Will Survive, that drag queen is one with her pop diva for that moment in time. She relates to, and celebrates, the emotions of "I grew strong, I learned how to get along." Ms. Gaynor's struggles and triumphs are the queen's struggles and triumphs. The drag queen learns from the diva, respects her, idolizes her, honors her, relates to her, canonizes her, wants to be her -- all at once.

A blackface performer had no respect for the people he was caricaturing. In our nation's history, most blackface performers were white males who reduced African-Americans to clowns and simpletons. He sang songs with titles like "All Coons Look Alike To Me" and "Who's Dat Nigga Dar a Peepin." Jim Crow, a character created by Thomas D. Rice, was an amalgam of racial stereotypes in the pre-Civil War era. Rice did not idolize the black man he personified; he ridiculed and mocked him, made him an object of laughter, provoked jeers and derision.

Today's drag queen is at home in a gay bar, a pride parade or an AIDS charity event. Her audience is comprised of individuals who want to rejoice in difference, to celebrate a shared triumph over prejudice and misunderstanding, to find strength in community.

Minstrel show audiences reinforced their perceived superiority over others. If they were celebrating anything, it was their white privilege.

Drag queens do not hate women. Drag queens view women as sisters and friends, as inspiration.

A blackface entertainer promoted hatred toward an entire class of people.

A drag queen today is a symbol of empowerment. Drag queens were in the vanguard of the Stonewall riots, directly responsible for leading the gay community into the battle for equal rights. Mary Cheney should be thankful to those Stonewall queens who started us down the path to her same-sex marriage. RuPaul's mantra -- "If you don't love yourself, how in the hell you gonna love somebody else?" -- is a political statement of tenacity and personal identity. Mary Cheney should shout out an "Amen" to people like RuPaul who have helped lift up a generation of LGBTQ individuals.

Minstrelsy was comprised of black personae that were dim-witted buffoons.

Mary Cheney: You are assigned a 500 to 750 word essay explaining your motives for equating members of the LGBT community with hateful and degrading minstrelsy. If you wish, you have the option of including an apology within your essay. 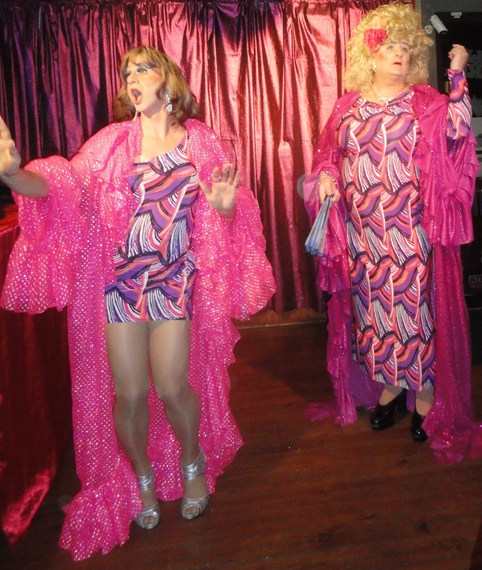 The author and spouse