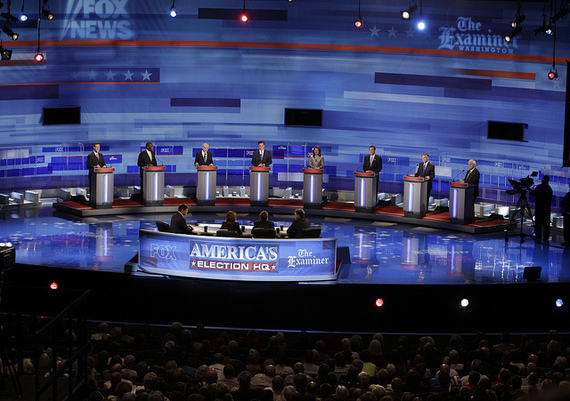 During the recent Des Moines Republican debate New Jersey Governor Chris Christie made headlines answering a question from moderator Bret Baier when he asked Christie what he thought was, "the one thing that the federal government does now that it should not do at all?"

In living rooms across America viewers either agreed or disagreed with his stance, but unbeknownst to the majority of them Christie was misstating the truth. Federal funding does not pay for abortions. It pays for STD and cancer screenings, contraception and other public health services, but not abortions. Because Baier was likely unaware of this, Christie's statement went unchallenged.

The media is supposed to educate its viewers and readers by covering stories objectively and from all sides. In this case, I don't think the majority of the media is even aware of Christie's mistake. There were a few left leaning publications that took Christie to task for flipping on the issue of funding Planned Parenthood over the years, but none of those journalists mentioned the fact that the money received from public funds does not cover abortions.

Federal funding doesn't cover abortions
Public funding of medical care at places like Planned Parenthood does not look like what most of the general public imagines it to be. The image of large checks being written by the federal government to family planning providers to spend as they wish are just not the reality.

In alignment with the Hyde Amendment, which was established in 1976, public funding for Planned Parenthood only covers STD and cancer screenings, contraception and other preventative health services. The Hyde Amendment strictly prevents this funding from covering abortions, except in the case of rape, incest or threats to the health of the mother. The harsh reality is that Medicaid is still the largest insurer of the poor, and even in individual state Medicaid programs, abortions are only funded in 17 states. In every other state in this country, women must pay out of pocket, with some rare exceptions.

Dumping 800,000 women needing contraceptive services into an already overtaxed system of providers for low- income people means lack of access to services. In 2011 an estimated 31% of US doctors were reported as "unwilling" to take new Medicaid Clients. What options does this leave?

If successful, the defunding of Planned Parenthood will not curb the need for abortion, but rather decrease health services for people who desperately need them and overburden current providers from being able to see clients in need of more urgent health care. Not only appointments for preventative health screening like breast exams and pap smears will be hard to access, but we may find safety net providers unable to see more fragile clients battling diabetes and heart disease or children needing ongoing medical treatments because of an influx of clients needing a new family planning provider.

The great irony at play here is that by cutting this funding we are actually increasing the possibility of more unwanted pregnancies at every socioeconomic level. In fact, recent findings by the New England Journal of Medicine published last week found a significant increase in the number of births in Texas among women who had previously received birth control at clinics that no longer get state funding.

Cutting the funding to Planned Parenthood will do nothing to curb the need for abortion. Education and contraception could curb unintended pregnancy rates, but that's what Planned Parenthood does. My concern does not lie with the candidates spouting political sound bites as much as it does with the media. They are either truly uninformed, lack the resources to do their jobs properly, or don't own true objectivity anymore. If there were a top-10 list of issues a journalist covering this election should become really familiar with, the funding of family planning providers would be on that list. Reducing and restricting access to contraception is a giant step backward and a repugnant attempt for political gain on the backs of low-income women.