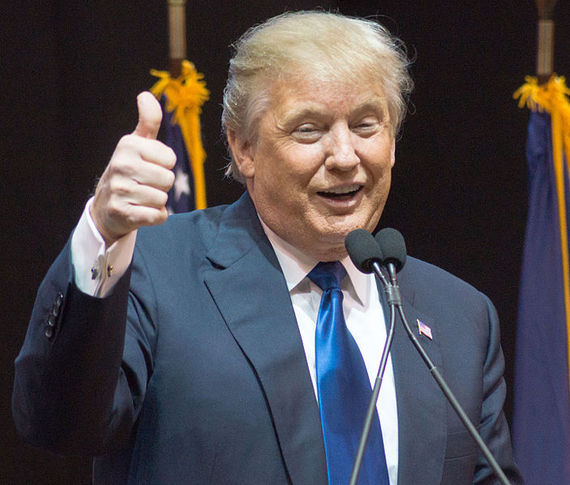 I'm sorry. This can't be what you had in mind. Clearly with the 800 -- I mean, 17 -- people you had up there at one point, there was no real sense that the story would end here, with this guy; that one of the other, more sensible, candidates wouldn't have risen up, taken the lead, rallied the troops, and won the nomination.

As it turns out, you have been as side-swiped, as sucker punched, as drop-kicked as the rest of us. We feel for you.

And there can be no overstatement about it: your party has done the unthinkable. It's made Donald Trump's ascendency to the GOP nomination for THE PRESIDENT OF THE UNITED STATES (had to cap it; it has that much gravitas) a fact. It is no longer a bad joke, a comedian's punchline; a redundant, regurgitated topic of every talk show across the land. It is an inarguable, horrifying, "make it go away, Mommy!!" fact. And you're not the only ones reeling... I hear this has triggered an international day of mourning.

You must be asking yourselves: "How did this insane thing happen? How did we let this get away from us?" It's certainly a big topic of conversation out here. Countless analysts have pointed fingers at your party leaders with accusations of, "This is your mess! You created this monster!" Others snipe at the media (in its every medium), rightfully faulting them for the panting, slavish, click-baiting, "all Donald, all the time" coverage that's been so ubiquitous, I swear, the man could sneeze and they'd preempt their click-baiting coverage of whatever click-bait was trending at the time to cover that sneeze. Still others bemoan the dumbing down of American culture due to crappy reality TV (of which your guy is a star), and internet access to every kind of idiocy man or machine has to offer.

Personally? I think it's Obama's fault.

You're a moderate so this likely doesn't apply to you, but I've come to believe that two terms of a brilliant, compassionate, thoughtful, elegant, BLACK president have proven to be too much for the millions of small-minded minions tucked under the Republican banner. They've been stewing and steaming, trolling their hate and bigotry whenever and wherever possible, but largely waiting in the wings for a gas-bagging, hate-spewing, sexist, xenophobic, narcissistic demagogue to have the money to advance without need of your more restrictive party system, and he has risen: the guy who gives permission to the worst of your party -- the white supremacists, generalized bigots, xenophobes, sexists, and haters of every kind -- to "make America great again!" Which appears to loosely translate to, "make America better for white people and others who hate other people who aren't like them." They came out in droves, this crowd, to "revenge vote," to stick it to all the "non-purists" (there's an uglier term for that, but I'm trying to keep this clean) and their liberal, progressive agenda that's ruining the country (i.e. embracing diversity), so it's high time that real Americans take it back, dammit!!

You may say that's not true; you may say it's unfair to paint the entire Republican party as a cabal of hood-wearing, cross-burning, spittle-flying, "get off my lawn, you (fill in the blank)" spewing hater, and you'd be right. Some of my best friends are Republicans; some of my family members are Republicans, so I know there are sane, compassionate, open-minded people in your party who are there because they believe in small government, fiscal conservatism, and personal responsibility. They're not the ones screaming for anti-LGBT laws, or trying to get all up in women's private parts. They're not the ones who refuse to discuss sensible solutions to immigration, gun control, poverty, and the crumbling middle class. They will listen to climate change scientists, people of other religions, and those who believe the Constitution is a living document that can evolve with the times. You know... moderate Republicans. And as one of those, you've just seen your party hijacked by the dark side.

But there's positive spin to be found: maybe this unthinkable event is a harbinger of needed change. The moment to expand your political horizons. To... you know, step a little left.

Now, don't give me that look. These are wildly changing times and everyone has to get creative. The old formulas, the previously held paradigms, have been battered to dust. All bets are off, new roads are being forged, a stitch in time saves nine -- no wait, that one doesn't work. But whatever the cliches, the times they are a'changin' and you need to make your own adjustments.

The alternative? The "step left"? I know... it's a tough sell. You've been trained since you were old enough to hear her name that Hillary Clinton is evil incarnate. She's Satan in Drag, Shillary, a "corporate whore," "crooked Hillary" (as your nominee is fond of chortling). To that I say: yawn. Don't you want to come to your own conclusions? Isn't it time to shake off the propaganda, look away from the indoctrination, and consider that -- unlike the choice that's just been made for you --she might actually be the better choice?

I know, heresy, but just think about it for a moment: a moderate Democrat. A centrist. An experienced negotiator, a conciliatory team player; a woman who's been willing to work within her party and with Republicans to get things done. Someone respected around the world. Someone who's endured the worst that haters have thrown. Someone who doesn't need to talk about the size of her hands to wield her virtual, and considerable, cojones.

And think about this too...it might be a tipping point: the hard-left of our party (inclusive of the Independent/temporarily Democratic contingent) -- the Bernie Bots, Bernie Bros, #FeelTheBerners, Hillary Haters, Bernie or Busters -- well, they hate her specifically because they believe she's not left enough, not extreme enough, not poor enough or marginalized enough to win their love. Doesn't that make her all the more palatable to centrists looking to accomplish real goals within the government system we're obligated to work with? isn't it possible that you, moderate Republican, might find her a solid "bridge candidate" until your party -- if, indeed, it ever does -- finds its soul again?

I'm suggesting that though she's not a perfect candidate (as no candidate is), she's the perfect candidate for you during this anomalous, soul-killing, party-annihilating time. A moderate Democrat that moderate Republicans can appreciate and support. One that gives you a way out, an opportunity to not participate in electing the most heinous, hateful, unqualified, and dangerous demagogue that either party has ever offered the voting public.

I'm sure we all agree that the "President of the United States" is too essential a role to potentially demean and denigrate by handing it off to a narcissistic blowhard for the sake of party loyalty. So, since no other choices are being offered to you by your own party, come join us for this one. We will authentically and graciously welcome you. We'll work together to elect the most qualified candidate on the dais... and how satisfying would it be to break the glass ceiling for women on all sides of the political terrain while we're at it? You know you want in on that cultural evolution!

So you're invited. Stop by, give us a call; we're here anytime. The door is open, the coffee's on; I hear there are muffins on a good day. Spend some time, do some good, and help us change the world. You can always go back to your side of the aisle the next go-around... I'm sure they'll have found a few better candidates for you by then!

Trump Endorses ‘Eric’ In U.S. Senate Race In Missouri. But There Are 2 Erics.

'I'll Never Vote For Him': Rusty Bowers Comes Out Against A 2024 Trump Bid