Remember how you called us your little "monkeys" when we were little? I always thought that this was a precious term of endearment! Well, I called my "beloved" Rob whom I have been writing to you about, a "sea-lion," with his big eyes and huggable frame, and he took offense -- he thought that I was calling him fat!

All this was in the midst of our discussing moving in, spending our lives together, and all the good juicy romantic stuff that resulted from our cruise to South America on Holland America's ZanDaam which took us from California to Chile -- and that either makes or breaks a couple, right? Right! 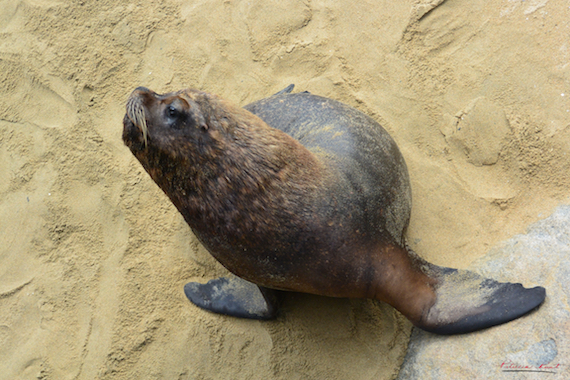 So, I realized that after a certain age that if you call your significant other anything but honey, you might accidentally call him or her the name of your high school sweetheart, your college heartthrob, your first spouse, or your dog! And how do I know this? I've done it! But wait...it wasn't that bad. I once called Dad by the dog's name. He wasn't too pleased but understood that at the moment, and like always, I was going in 57 directions and that these things happen.

I figured that if I were going to make this kind of mistake, better to make it with someone who already loved me unconditionally! He was my complete and total hero and had I called him "hero" instead of our dog's name "Tootsie," I think the response would have been better because he would remind me of it afterwards from time to time... but always in a good-natured way!

Parents sometimes get confused and call their children by the wrong child's name. Or their spouse's name. Not that mine ever did. I had perfect parents. That's why I write you in heaven, Mom. I simply have to because living without you is so very hard. But there's not a lot I can do about it. Sometimes, when something really fabulous happens, I pick up the telephone to call you and share the news but realize that I can't. But back to Rob: my sweet dream man. I call him "darling, sweetness, love, honey, sugarplum, and more."

Maybe it's because when I modeled my way through college in the garment or "schmata" industry, and everyone called me "dear" or "honey," I picked up the habit? But I have always used terms of affection. Part of the reason is that I heard them used between you and Dad often and lovingly.

So, now I pretty much organically call everyone "honey," "sweetheart," and "darling," and have done so without incident... including Dad! I was so afraid I would call him by the dog's name again. But I didn't. Life was sweet until a recent post here in the Huffington Post which says that you should only call people, children included, by their real names, and that not to do so damages people! Something about their identities! Oh dear!

This blows my modus operandi right out of the water!

So, now I don't know what to do. You always called me by my first name preceded by a "darling" or a "sweetheart" as in "darling Patricia." Maybe we would be wise to mix it up. Rob is coming into the room now. Time to experiment. "Rob, do you like me to call you honey or Rob?"

"Whatever you like..." he answers, because he is so easy-going. But that does not help me one bit. So, I try again.

"Honey, do you like me to call you darling, sweetheart, honey, or Rob?"

"Whatever you like," he answers... again! So, I decide to get my toes wet. "I read that we need to call people by their real names. Not even nicknames are good."

"I want you to call me whatever you want to call me. That's what makes me happy!"

"Would you like it if I called you something obnoxious and sugar-laden like some of our friends such as the ones who call each other 'honey bunny bunny bunny bear?'"

"Would you like it if I called you 'my little 'chou chou' as they do in France?"

"If you like that term of endearment..." he answers and I imagine him as a French poodle. Not a good image for a macho dude like Rob.

"Would you like it if I called you 'scotch and soda'"?

"Would you like it if I called you 'herpes simplex' or 'myocardial infarction'"?

"Whatever works for you..." Rob said.

Sometimes you can't win, but in not winning, you really are winning! And I obviously have a winner on my hands!