Falling on the 100th anniversary of the Ludlow coal miners' massacre, a growing movement of citizens groups will gather on Saturday afternoon in St. Louis to join the great Washington University sit-in against Peabody Energy.

The pillars of Big Coal are crumbling in St. Louis this week -- according to Wall Street analysts, and as an extraordinary grassroots movement holds Peabody and its university hosts and investors accountable for its legacy of ruin amid climate change, a failed regulatory system, and a proposed strip mine expansion that will effectively destroy the farming community of Rocky Branch, Illinois.

And for coal mining families across the nation, the Ludlow Massacre of children, women and immigrant union coal miners, is one of the most defining cautionary tales of injustice and rallying cries for action in the American coalfields that still resound today: No one's loss of life, liberty and health for coal industry profits is acceptable collateral damage.

A century later, the indefatigable students at Washington University have inspired the nation with their nearly 2-week sit-in, now joined by students at Southern Illinois University and across the nation, and are asking the same questions about their university's ties with Peabody Energy's climate change-denying mining operations. 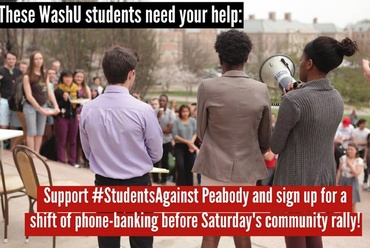 In a line: No one's loss of life, liberty and health in Rocky Branch, Illinois -- on Black Mesa, in Arizona, or the Bear Run strip mine in Indiana, or across the globe -- should be acceptable collateral damage for the Attorney General in Illinois or for Washington University trustees or anyone in the United States, in order to pander to Peabody's state-subsidized profit line.

When the Saline County board voted earlier this week to grant Peabody the right to make potentially disastrous road changes in Rocky Branch to facilitate a proposed strip mine expansion--even though Peabody has yet to receive the proper EPA permits--one commissioner simply dismissed the inevitable destruction as "only at 12 households affected by this."

Memo to Saline County commissioners: We all live in Rocky Branch, if you consider the toxic fallout of the strip mining operations on our water, land and climate.

Rocky Branch is not "only 12 households," but the deeply rooted and historic community of war veterans, retired coal miners, business owners, farmers, preachers, parents and grandparents, and tax-payers who have the same civil rights and constitutional rights to environmental protection as anyone else. 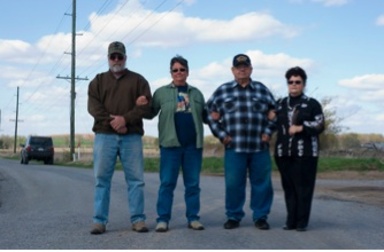 This week, in fact, marks the anniversary of Dr. Martin Luther King, Jr.'s famous "Letter from Birmingham Jail," who reminded us in 1963: "Injustice anywhere is a threat to justice everywhere. We are caught in an inescapable network of mutuality, tied in a single garment of destiny. Whatever affects one directly affects all indirectly."

In an age of climate change and the need for immediate action, never has that sentiment been more compelling.

In the tradition of King and the civil rights movement, students and community advocates at Southern Illinois University in Carbondale also held protests for divestment from Peabody yesterday. 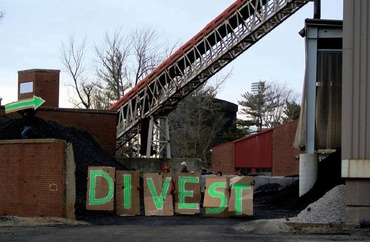 Mother Jones, the great "Miner's Angel" and immigrant union organizer, who is buried near St. Louis in our southern Illinois Progressive Miners' cemetery, once reminded the nation of the lessons from Ludlow, where coal company guardsman murdered innocent children, women and striking union miners:

"No one listened. No one cared. The tickers in the offices of 26 Broadway sounded louder than the sobs of women and children. Men in the steam-heated luxury of Broadway offices could not feel the stinging cold of Colorado hillsides where families lived in tents. Then came Ludlow and the nation heard. Little children roasted alive make a front page story. Dying by inches of starvation and exposure does not."

Are Washington University trustees, investors, the Illinois Attorney General, and the nation listening to the students and communities about the Peabody crisis today?