My name is Darius Adams. I'm the son of Brenda Tracy who is a public rape survivor. It was 2010 when my mom first told me that she was raped. I was 17. We were sitting in our car in our driveway. I remember it because it was a life-changing moment for me. She didn't tell me because she wanted to. She told me because she had to. She was trying to save my life. I was out of control at the time. I was angry and broken and I didn't care if I lived or not.

I remember her crying and struggling to get the words out "I was raped." She apologized to me over and over and asked me not to hate her. "Please don't be ashamed of me. I'm sorry. I'm so sorry," I still can't understand why she was apologizing to me, but after that talk, I started to see her as a different person. I saw her as someone who had been hurt, and she was just doing the best she could as a single mother with two kids. It was then that I began to turn my life around -- mostly for myself, but also for my mom. I wanted her to be proud of me. I wanted to make sure that what she went through and all the sacrifices she made for me and my brother were not in vain.

It was 2014 when my mother went public with her story. I wasn't prepared. She hadn't told me the details in 2010, but now every ugly detail was on the internet in an article by John Canzano at the Oregonian. To this day, I haven't read it all. I can't. I just can't.

I was scared when the article first came out. I didn't know how people would react to us. Would they attack my mom? Would they say terrible things about her? Would I have to defend her? and what would I say? But a great thing happened. People reached out to us and they supported us. They expressed their love and gratitude for my mom coming forward and being brave enough to tell her story.

I was proud of her. It was the first time I saw her happy. It was like a huge weight had been lifted off of her. I've heard her say more than one time "I walked out of my prison of shame and silence that day" and she did. I could see it. Ever since then my mom has worked hard to help others. She's passed five laws in Oregon. She's won numerous awards. We just went to Washington DC where she received the National Service Courage Award from the United States Attorney General.

She also changed a Pac12 rule so that athletes with serious misconduct issues can't transfer into our conference. She's my hero. And that's why I'm writing to you. I'm a college athlete, and I watch ESPN religiously. There's a serious problem in sports. We don't take sexual violence seriously enough. Seventeen years ago Coach Mike Riley suspended the men that hurt my mom for one game and just yesterday I saw the story about Baylor. Nothing has changed. Schools are still more worried about money and football than people's lives.

I'm a grown man now. I would never hurt a woman that way and I know that most men wouldn't. Why are we protecting this small group of men? Why are we allowing them to destroy people's lives? All of these victims have families and they get hurt too. I'm still dealing with what happened to my mom.

We need to do something right now, and I think it starts with the NCAA creating a policy that bans violent athletes. Enough is enough. It's been 17 years and nothing has changed. How many more years do we have to wait for something to happen? As the NCAA you have authority over many schools. YOU can change this. These schools have proven that they are not going to do the right thing. I believe it is your responsibility to step in. And please don't do it for me or my mom. Do it because it's the right thing to do. 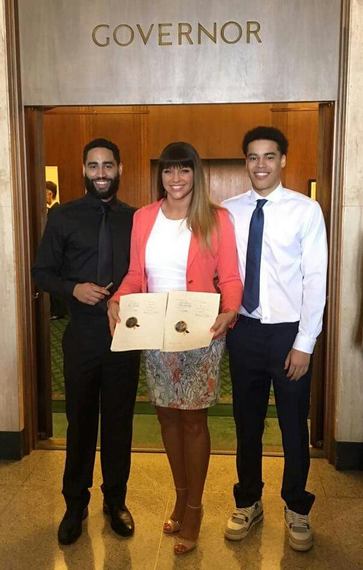 [Related: What It Looks Like When A University Truly Fixes How It Handles Sexual Assault]