I posted a picture of me at 18 on Facebook the other day. It was from a time in my life that I didn't love how I looked, but the picture was kind of funny with my huge '80s hair so I thought it was worth posting for a few laughs.

But only one person (my husband, the person closest to me) asked me what was up with my puffy cheeks in that picture. He could see from the rest of my body in the picture that I wasn't overweight -- so why were my cheeks so puffy?

He pointed out exactly why I hate all pictures of me for a period of four years, and almost 30 years later I couldn't just tell him why I had puffy cheeks. I think I brushed off his question with an explanation of "leftover baby fat" and growing out of them eventually.

But my puffy cheeks were a symptom of my bulimia. And my bulimia started after suffering from anorexia and starving myself for months. Once I started to finally eat again -- I purged for years.

And while I consider myself "better" in that I don't starve myself or purge my food -- I will never feel thin enough. Ever. I still worry about everything I put in my mouth, how my clothing fits, and will catch glimpses of myself in every mirror looking for faults.

My 10-year-old threw a fit last year when I made her wear snow pants to an outdoor event. It was well below zero and there was no way we were going out without being bundled up from head to toe. "But Mom, my friends will be there and my snow pants make my butt look big."

Your butt look big, Eloise? For one, that is impossible... and for two, everyone will be wearing snow pants... and for three, trust me, no one looks at snow pant butts.

My daughter is five feet tall and is lucky to weigh 60 pounds soaking wet and barely registers as having a BMI. She could wear 10 pairs of snow pants without the worry of her butt looking big. But that fact doesn't really matter, does it.

She's a healthy eater, gets plenty of exercise as a dancer, and even though she has a mother who will probably never be totally past her eating disorder (what an addict is), we still never talk about or show unhealthy habits around our kids, and we live in a home with healthy food and people who exercise regularly. We don't own a scale.

And she has the same body I had at 10 and 11 -- tall, seemingly impossibly thin, and with legs that go on for miles. I'm not worried about her -- she's a healthy girl -- but to hear her worry about looking fat...

I sank. My heart broke for her into a million tiny pieces.

And I want to do everything to make sure my three daughters do not become one of the 10 million Americans with eating disorders.

I see the stick thin models on the runway, the supermodels on the cover of magazines (many photoshopped), ads everywhere on how to have a flat stomach and the importance of a thigh gap, and a diet ad on TV during almost every show. Daily I feel like I'm trying to push away the negative media images and reinforce to my daughters what is really important -- health and the importance of loving themselves.

At this point you must be wondering why I'm writing this very personal letter to you, Nordstrom. Well, it's because I was shopping with my daughters at your store (one of my favorite places to shop) on Friday and this pillow prominently displayed in your store stopped me in my tracks. 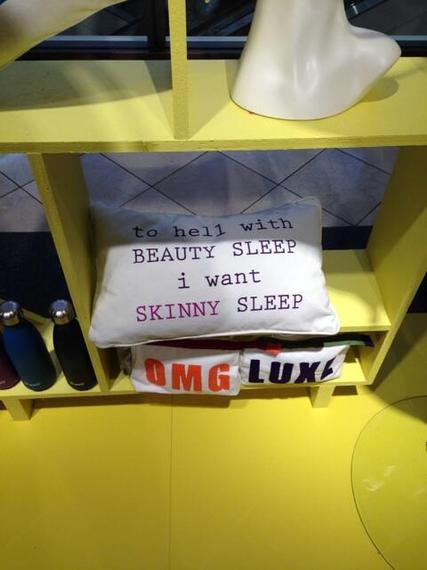 Actually, it stopped my daughter in her tracks... "People can get skinny by sleeping, Mom? I had no idea."

No hon, you can't get skinny when you sleep. You have good sleep because it makes you healthy and strong. That pillow was meant to be kind of a joke I think -- and a horrible one at that.

Oh Nordstrom -- we have skinny drinks and skinny food and skinny pills and see skinny ads and read skinny articles... and now, now you have to make our daughters think that there's skinny sleep? We're embroidering skinny dreams on our pillows now just like the ones that we can't etch out of our hearts?

Did you know that around 40 percent of American girls ages 9 and 10 report dieting to lose weight?

Let's do better by our daughters and our sons and start making strides on focusing on healthy messages and giving them more positive images of what a real woman or man looks like. And should look like. I know we have a long way to go and daily we are bombarded with negative influences... so some might say, "What's the big deal about a pillow with a cute little saying?" And I'm saying -- taking a pillow off the shelves is one little step in the direction where millions of steps still need to be taken if we are ever going to stop this cycle.

Having an eating disorder is like being a drug addict; this illness is always near the surface, just waiting for the right trigger... and while one can survive without drugs or alcohol, a person with an eating disorder is faced with their biggest fear -- food -- every single day. So whether you want to believe it or not -- even seeing the words "skinny sleep" on a pillow can trigger us into thinking something is really possible. Just like my daughter asked me such an innocent question about it on Friday in your store.

Don't be responsible for adding to this devastating epidemic.

Thank you for listening,

Update: I received the following DM on Twitter from Nordstrom.

We're so sorry we disappointed you. This is a sensitive subject and we take what you're saying seriously. We totally see your point here and would never want what was suppose to be a play on a well-known saying as sending a different message. We appreciate you sharing your perspective with us. We'd like to share this feedback with our buyers and get back to you.

I'm glad Nordstrom responded so quickly -- and I actually tweeted them about this three days before writing this post -- but now it's time for them to remove the pillow from their stores. Triggers are different for everyone -- and if my daughter is asking about what skinny sleep means, then I know she is not the only daughter asking this same question. And it's honestly a pretty sad "play" on a well-known saying -- that truthfully already needs to go away.

@sellabitmum Hi Tracy. We understand your view and are removing it from our stores. Thanks for reaching out.

Thank you Nordstrom, for listening to me, not just as one of the millions who have or are suffering from an eating disorder, but also as a mother who wants to provide positive messages to my children. I want them to be kind and generous and strong and healthy, not worrying about getting skinny while they sleep. Bravo Nordstrom.