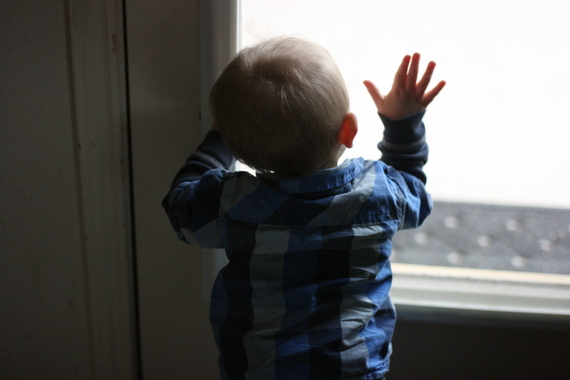 "How are you today?" one of your mom friends asks as she passes you in the hallway of your sons' elementary school.

You fire back the typical, expected response. "Doing well," you say, even though, if one were to open up the heart of you, one would see that you are not, in fact, doing okay. But it's too complicated. Too raw. You don't know her well enough. These are the excuses you offer yourself as you pass by, on your way back home with 4-year-old twins clutching a stroller holding a 19-month-old.

The truth is, you're incredibly lonely.

Not lonely in the sense of your marriage is rocky or your relationships with your kids aren't healthy or you have nobody and no one on the planet. You are lonely in one sense only: You are a parent of young children.

It's so hard being a parent of young children.

It's hard to find time for practically anything, especially socializing, because all your time is consumed with kids, and all your nights are consumed with making sure they get enough sleep, and all your days are consumed with signing school folders and folding clothes and tidying up a house that gets ransacked in half an hour of kids being home and often doesn't even take that long to look like a thief broke in and rifled through all the art supplies.

You don't have much opportunity to make friends or cultivate friendships, because it's too much work to get everyone packed up in the car, and then, when you've finally got the little ones strapped in and ready to go, you don't really feel like going anymore, because one fought you for half an hour on which shoes he wanted to wear, and one of the older ones is still MIA, in the house packing up all his stuff, because he wants to take a thousand Pokemon cards with him, even though you've tried to explain that the kids at your friends' house aren't old enough to be interested in Pokemon, and another just shouted that he hates you, because you're making him buckle his seat belt, which he always has to do, and he'd apparently rather die. Or maybe just run away.

So it's a very lonely place where you find yourself, because no one has time to talk, except about what's simmering on the surface, and you get really used to exchanging those pleasantries like "Hey, let's get together soon," and then it never happens, because life is busy and parenting is hard and sleep looks a little more inviting at this point. And before you know it, you realize that the only real friends you have are a 19-month-old and two 4-year-olds, because the others are in school and no one ever calls you anymore, not even your sister, and you don't go anywhere, because you're not all that big on play dates, and who needs friends anyway? That's what you'll tell yourself, because you'd rather not think about what you're missing.

This stage of parenting is hard. It really is.

Kids are constantly talking to you, and you're constantly talking back to them, trying to address discipline issues, trying to discuss what's happening tomorrow, trying to shush them while you go over logistics with your partner, because the only time they really want to talk to you is the moment you say, "Let's talk about that real quick" with another adult.

This stage of parenting has attitudes and dirty socks and kids trying to fight over who gets to have technology time on the iPad first, and there's limiting of screens and trying to get them all outside for enough hours in the day so you can actually breathe without someone breathing back into your mouth, and there's feeding them and feeding them and feeding them again, because this is pretty much the story of your life. And when the day is all done, you'll sit on the edge of your bed, staring at a nick in your wall that one of the kids put there accidentally with his foot, and you'll wonder what in the world you were thinking, having all these kids.

Time flies. And yet doesn't. It's a mystery to every parent on earth.

You feel lonely, because not only do you never get out, but no one ever talks about the hard parts of parenting. They just all make it look easy. Which makes you feel a little guilty. And probably them, too. Because, really, they're just like you.

Your body aches when you get up in the morning and when you go to bed at night, because kids will smash you like a steam roller and then hit reverse and do it again. And, also, it's not easy getting older. Your bones will sometimes feel like they're coming apart.

This stage of life will pass. And when it does, you'll only have your memories.

You have to deal with arguing and sassing and kids growing teeth at the same time other kids are losing teeth and what should you do about the tooth fairy, and should you let them believe in Santa Claus, and should you tell them about their grandparents and divorce and what that even means? You have to deal with the craziness of impulsiveness like trying to walk up stairs with roller blades on and trying to dig a hole to the earth's mantle in your backyard and deciding it would be fun to fly with a skateboard off the back porch. You're dealing with extravagant messes, because kids are slobs.

You're exhausted. You're too young to be this exhausted, but the fact is, you are. You make it to the end of the day, and that's really saying something.

You encounter important decisions -- should I make them this for breakfast? Should I talk to the teacher about a bully? Should I send my child to school, or should I homeschool? Should I quit working, or should I keep working?

You're watching some friends get divorced and others take a break, or flourishing in a way that doesn't really seem possible for you and your partner right now. How do they do it? What happened to the others? Will it happen to you?

You're probably thinking, in the back of your mind, that you'll only ever be Mom. Who are you, apart from your kids? The Before Kids you seems like another person entirely. (And she probably is.) You wonder if you will ever "find yourself" again. You wonder if anyone remembers your name, outside of Parent.

But one day? This stage of life will only be a memory.

It's true that in your reality, as it is today, you will sometimes want to tie your kids up or just pretend they're not even here, shaking the house loose from its foundation. Sometimes you'll feel a bit too close to crazy, because there's no one to talk to, and as soon as you get on the phone with a friend, the clowns are hanging from the drapes and opening the refrigerator (even though you cleaned up breakfast five minutes ago), and you won't be able to ignore the three pounds of grapes eaten in one sitting this time, because there are still three days of lunches that must be made. They're playing with the plunger in a toilet that probably wasn't flushed, so you'll have to hang up before your friend even answers.

But you won't. This stage of life will pass. And when it does, you'll only have your memories.

So let's make them good. And full. And way bigger than the loneliness we feel for a small moment in time.