To the fan I lost yesterday:

I don't owe you an explanation, but I thought I'd offer one anyway. I do this more for your sake than mine. You see, maybe, as you later suggested, I was in a bad mood. Maybe I could have been a bit more polite about it. Maybe I'm more sensitive to it now that I have kids. Maybe I'm just sick of hearing these comments about parents. Maybe I know that my wife has to take the twins with her when she goes grocery shopping sometimes, so she could easily be on the receiving end of your sort of bullying. Maybe I took it personally.

Whatever the case, there I was, walking down the aisles of the grocery store looking for the ingredients for a new chili recipe I wanted to try. I heard the kid screaming from a distance; the whole store heard him. It was a temper tantrum, a meltdown, a hissy fit -- it happens. Toddlers are notorious for losing their cool at the most inconvenient times. Nobody likes to hear it, but it happens. You're out running errands with your little guy, everything is fine, and next thing you know he's in full-on rabid poodle mode. It's humiliating and emotionally draining, but what can you do? Pull out that large glass, sound-proof aquarium you carry around and stick your kid in it so nobody can hear him shriek? That's a possibility, but the logistics don't always work. Slightly more realistically, the peanut gallery probably expects you to drop all of your groceries and immediately run into the parking lot, so as to save them from having to deal with the spectacle. But it's not always that simple; maybe you don't have time to shut down the whole operation just because Billy's gone nuclear.

It wasn't that simple for the mother of this kid. I finally came across her in the beans aisle. She had a cart full of groceries, a kid riding along and another one walking beside her. Well, he wasn't really walking so much as convulsing and thrashing about like he'd invented some bizarre, angry interpretive dance. He was upset about something, from what I gathered it had to do with a certain lucky cereal he wished to acquire, but which his mother refused to purchase. I felt his pain, poor guy. My mom never bought me sugary cereal either -- "breakfast candy," she called it. She used to get us Cheerio's -- "breakfast cardboard," I called it.

I felt the woman's pain even more. She could bribe her kid into silence, but she was sticking to her guns. Good for her, I thought. Sure, if she'd only meet his ransom demands, my bean purchasing experience would be a bit more pleasurable, but I was rooting for her nonetheless. Not everyone felt the same way, apparently.

I'd met you a few minutes earlier. You told me you were a fan. We spoke for a moment, you seemed nice enough. Then we crossed paths again there by the beans and the screaming toddler. I guess you thought we were friends, you thought you could confide in me your deepest thoughts. You glanced toward the mother and the kid, then at me, rolled your eyes and said in a loud voice: "Man, some people need to learn how to control their f**king kids." The lady could definitely hear you, but I guess that was your intention. You had this expression like you were expecting a high five. "Yeah, put it here, dude, you really told that young mother and her 3-year-old off! Nice!" Is that how you thought I'd respond? What is it about me that made you think I would react that way? You're the second stranger in the last few months to say something like that to me about a mom with a tantrum-throwing toddler.

Yeah, I didn't respond the way you anticipated. Instead, I offered my own helpful suggestion: "Man, some people need to learn how to shut their mouths, watch their language and mind their own business." You looked at me like I hurt your feelings, then you muttered some choice words under your breath -- as cowards are wont to do -- and walked away. Later that day, you sent me an email, threatening to tell everyone that I'm "abusive" and "crappy" to my listeners. Well, now I'm one step ahead of you. Now, everyone knows about my shameful "abuse." Let them decide who's the bully: the guy who vulgarly insults a woman while she's dealing with a difficult child, or the guy who tells the guy who insulted the woman to shut up and go away?

After you left, injury was quickly added to insult when her kid bumped into a display and knocked a bunch of stuff onto the ground. I started to help pick it all up, but she said she wanted her son to do it because he's the one who made the mess. Touché, madam. Nicely played. A lot of people would buckle under the pressure of having sonny going psycho in aisle seven while, seemingly, the whole world stops to gawk and scrutinize, but this lady stayed cool and composed. It was an inspiring performance, and it's too bad you missed the point because your feeble mind can only calculate the equation this way: misbehaving child = BAD PARENT.

I'm no math major, but that calculus makes no sense. A kid going berserk at a grocery store doesn't indicate the quality of his parents, anymore than a guy getting pneumonia after he spends six hours naked in the snow indicates the quality of his doctor. Grocery stores are designed to send children into crying fits. All of the sugary food, the bright packaging, the toys, the candy -- it's a minefield. The occasional meltdown is unavoidable, the real test is how you deal with it. This mother handled it like a pro. She was like mom-ninja; she was calm and poised, but stern and in command.

See, I figure there are two types of people who mock and criticize parents whose children throw tantrums in public. The first is -- from what I gathered based on your age (you looked about 19? 20, perhaps?) and what you said in your follow up email -- your type: the non-parent who thinks, if they ever have kids, they'll discover the secret formula that will prevent their hypothetical son or daughter from ever crying in front of other people. Then they promptly scrutinize and chastise real parents for not having this fake, imaginary, impossible, non-existent formula. This sort of non-parent doesn't realize that, unless they plan on using a muzzle and a straightjacket, there is nothing they can do to tantrum-proof their toddler.

Fine. Ignorant non-parents, who don't know what they're talking about, imposing ridiculous standards on actual parents because it makes them feel superior. I get it. I don't like it, but I get it. As bad as you people are, you're not nearly as horrible as the second type: actual parents with grown children who judge other parents, as if they haven't been in the exact same situation many times. I had an older guy complain to me recently about babies that cry during church. He said: "Back when our children were babies, you didn't have this problem." Interesting. Apparently babies didn't cry in the '50s. The whole "crying baby" thing is a new fad, it would seem. These folks who had kids a long time ago seem to have a rather selective memory when it comes to their own days of parenting young kids. They also tend to dismiss the fact that modern parenting presents unique challenges, some of which didn't apply several decades ago. I always love the older folks who lecture about how THEIR kids weren't as "attached to electronics" as kids are nowadays. That's probably true, but mainly because, well, YOU DIDN'T HAVE ELECTRONICS. You had a toaster and a black-and-white TV with two channels, both of which were pretty easy to regulate. But, sure, congratulations for not letting your kids use things that didn't exist. On that note, I have a strict "no time machines or hover-boards" policy in my home. It is stringently enforced. I'm thinking of writing a parenting book: "How to Stop Your Child From Becoming Dependent Upon Technology That Isn't Invented Yet"

Anyway, listen, I don't think you, of all people, should be telling other folks what they "need to learn." If you just shut up and paid attention, you'd realize that YOU could learn plenty from mothers like the one we both encountered yesterday. I know I have lots and lots to learn as a young parent, which is why I'm always prepared for a more experienced parent to take me to school and teach me a thing or two, even if they don't know they're doing it. Parenting is the easiest thing in the world to have an opinion about, but the hardest thing in the world to do. You shouldn't scrutinize parents when you aren't one, for the same reason I wouldn't sit and heckle an architect while he draws up the blueprint for a new skyscraper. I know that buildings generally aren't supposed to fall down, but I don't have the slightest clue as to how to design one that won't, so I'll just keep my worthless architectural opinions to myself.

In any event, it was nice meeting you.

This piece was originally published on The Matt Walsh Blog. 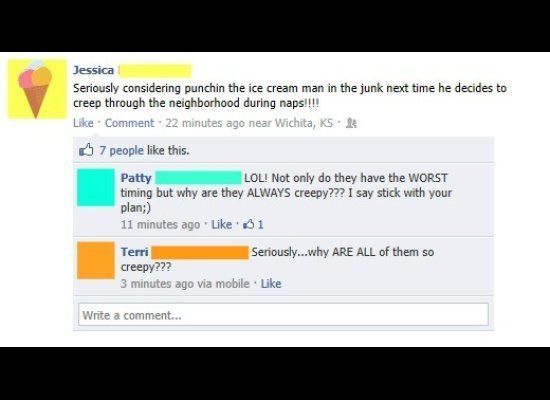 9 Things Parents Should Avoid Posting About On Facebook This Summer
More:
parenting adviceparents-toddlersparents-dadsParentsDiscipline