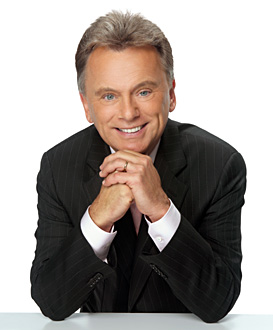 I did a triple-take when I read the editorial "Opposed to Obamacare? Then You Must Be a Racist". Given that it was published on a conservative website, it wasn't hard to figure out the sarcasm -- and just what conclusion would be waiting at the end of the column.

In truth, the writer could've simply begun and ended with the title and written the phrase, "it's not true" in the middle. The effectiveness of the point would have been the same (as in "very little").

But lo and behold, I get to the byline of the editorial and read the following: Mr. Sajak is the host of "Wheel of Fortune" and PatSajak.com.

Pat Sajak... THAT Pat Sajak? He's writing political editorials?! This guy -- whose literary and philosophical contributions heretofore have included to the question "want to buy a vowel" and the frequent suggestion that one "check the used letter board" before selecting a consonant -- is waxing rhapsodic on the evolving health care debate?!

Oh, it gets better.

In Sajak's editorial, he chastises Frank Rich of the New York Times (a former theater critic) for suggesting that the foundation of the resentment towards President Obama and his healthcare reform is rooted in race.

I won't even get into a protracted discussion on to the Tea Party contingent's actions. Their "N-word" bombs say all that needs to be said. If you think it's any coincidence that the ignorance flaunted by Tea Party and the Birthers is identical, it's not. They're the exact same people. If you recognize one or two or 200 people in various Tea Party videos who also happen to belong to that "unnamed" militia stockpiling arms, living in rural "wherever"... don't be surprised. They're the exact same people.

You, Pat Sajak, mean to tell me that after invading Iraq under false pretenses and entering into an era of unprecedented spending and debt expansion during the George W. Bush presidency, that these "radicals" would have you believe that health care reform rightly inspires an unprecedented level of anger and vitriol?

You're saying this is a "principled" debate being waged by the Right?

These people all of a sudden became radical "fiscal conservatives" the moment President Obama announced his plan for health care reform and are willing to go to jail because of their beliefs. And by the way, 4,400 American servicemen and women died in Iraq and no Congresspeople have been spat upon or called "N*****" in the 7 intervening years.

You know, the war that helped bankrupt the nation? THAT Iraq war? Just wanted to put that out there for all of you "fiscal conservatives who happen to be against health care reform for reasons OTHER than race."

So much for "principled" dissent and debate.

Of course Frank Rich is right. But I digress; this is about Pat.

Instead of creating some well-crafted rebuttal to Sajak and skewering his arguments accordingly, I will simply let Sajak's words do most of the talking. I, in response, will do all of the laughing:

Now, however, Mr. Rich opines on political and social issues for the Times, and, while the results are usually mildly amusing (even if unintentionally so), his reach has grown a bit, so the damage he causes can travel beyond the footlights. I'm not sure why anyone turns to Rich for political analysis--heck, you might as well read the rantings of a TV game show host--but the Gray Lady continues to pay him for his weekly column, and, at the rate she's bleeding money, that's no small sacrifice.

It's a good thing Sajak realizes the inherent absurdity in his own "TV Game Show host rantings." The difference is that Rich IS a journalist. Sajak... not so much. He's a former weatherman... er uh "meteorologist." When I want a barometric pressure reading or to buy a vowel, Sajak is the man for the job. But other than that...

You Pat, made a living pointing at Vanna White playing a modified version of electric hangman. We "writers" would call your assertion a "specious argument" or in Wheel of Fortune speak, "comparing apples and oranges."

Newspaper columnists (even ex-theater ones) are paid to offer opinionated analysis. Game show hosts are not. Know your place Pat and stay in your lane.

The next thing you know, Wink Martindale and Alex Trebek will be guests of George Stephanopoulos chiming in on the effectiveness of TARP. I mean, let's be real. Wouldn't the former host of Tic, Tac, Dough be a credible economic opinion-leader?

Uh... no. Know your place Pat. You point, Vanna turns. That's the deal and those are the rules. It's in your contract.

So that's it. It's just a bunch of scared, white males who would yelp about anything this gang came up with. As Rich makes clear, this is merely a replay of the opposition to the Voting Rights Act of 1964. You get it? If you express opposition to the bill, you're a racist, sexist homophobe.

It's an oversimplification, but you're warm Pat. The Voting Rights Act received only ONE "no" vote in the Senate - Strom Thurmond.

You do the math.

What Sajak fails to acknowledge or understand is that debate and disagreement are always acceptable in American discourse. This though is about intimidation and fear tactics being used in 2010 which were also employed during the Civil Rights movement. There's familiar wallpaper here and some of us are quick to recognize it:

Welcome to post-racial America, where those who oppose a piece of legislation must defend themselves against the scurrilous charges of a man who seems much better suited to reviewing "Cats." This was a particularly shameful column, and the millions of Americans who oppose this legislation are owed an apology.

No he didn't! The Game Show Host did NOT just impugn the qualifications of the true journalist, with a show business diss?! Really, he didn't just do that did he? He demanded an apology, too... on behalf of the "offended?"

If Frank Rich (the journalist) is better suited to reviewing Cats, then what does that say about the "game show host" (and former weatherman) who wasn't even the best host in the history of his own game show? Somebody get Chuck Woolery on the phone. He needs to see this!

If we go back and watch the video of the Little Rock Nine making their way into Central High School in 1957, notice the "N*****" taunts, the spitting and endless intimidation. Much of that should seem vaguely familiar to the "principled" debate we see today.

Let's also acknowledge the fact that death threats against President Obama are up more than 400% compared to President Bush. Up 400% BEFORE the healthcare debate started, and President Obama mind you won his election to office fair and square, not needing his brother, the Florida governor, to "allegedly" help seal the deal. We can't even fathom the percentage increase in the weeks since the ratcheting up of the Tea Party rhetoric.

Animosity? Incivility? Not about race you say?

Sajak closed with this:

Let's yell and scream if we want to. But would it be too much to ask that we approach the matter based on its merits and leave the psychobabble to Dr. Phil?

Agreed -- just as long as the 2nd best host in the history of Wheel of Fortune leaves the health care editorial commentary to the trained professionals.

Morris W. O'Kelly (Mo'Kelly) is author of the syndicated entertainment and socio-political column The Mo'Kelly Report. For more Mo'Kelly, http://mokellyreport.wordpress.com. Mo'Kelly can be reached at mrmokelly@gmail.com and he welcomes all commentary